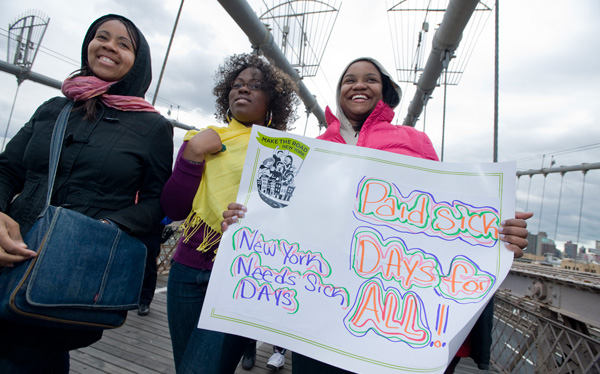 With a changed economy, targeted concessions and an approaching primary, progressives mount a renewed push for a citywide law

Amid a deluge of right-wing state and local laws, paid sick leave has offered a rare bright spot for progressives. Its progress hasn’t been steady, but it hasn’t been slow. Five years after San Francisco became the first U.S. city to mandate that employers provide paid sick leave to employees, similar bills have been debated or passed across the United States.

“People on the left are looking for things that are replicable, winnable, and will improve people’s lives,” says Working Families Party Executive Director Dan Cantor. Research shows that at least 40 million U.S. workers are employed in positions where they will never be eligible for paid sick leave, and that such workers are more likely to go to work sick, and to end up in the emergency room.

As David Moberg noted for In These Times last year, paid sick leave laws are broadly popular. But conservative groups, in New York and around the country, have consistently opposed such laws.

Kia Murrell, the main lobbyist against the policy for the Connecticut Business and Industry Alliance, said last year that if there was a problem of sick workers infecting customers, "we would all be sick all the time," and that low-wage workers are too quick to call in sick: "A high-powered executive, if they get a cold, is more likely to tough it out."  In a 2010 interview with Bloomberg Business Week, Partnership for New York City CEO Kathryn Wylde acknowledged the appeal of paid sick leave but said the move to "undertake a social justice agenda" and "ideologically impose" the law was a mistake.

But in the three years after San Francisco passed its own law, the Drum Major Institute found that the county's job growth and business growth beat five surrounding counties.  An Institute for Women's Policy Research survey last year showed that two-thirds support for the measure among employers. Whether genuinely converted or conceding to political reality, the Executive Director of the city's Golden Gate Restaurant Association has recanted his organization's opposition.

In New York City, the push for paid sick leave goes back years; in 2009, 700 people marched across the Brooklyn Bridge to City Hall in Manhattan in support of the measure. By all accounts, advocates had majority support on City Council in 2010, and a majority large enough to override a promised veto by Mayor Michael Bloomberg. But they never got the chance, because Quinn exercised her discretion as Council Speaker to prevent the bill from coming up for a vote.

"I support the goal of expanding benefits to workers, Quinn told the New York Daily News, "[but] I have to help small businesses stay alive in a fragile economy."

“I don’t know if it was a political error,” says Cantor. “I think it was a mistake.” He says there remains “a fair amount of anger on this among organizers and advocates, especially in immigrant and of-color communities, because they’re so over-represented in the low-wage workforce.”

Quinn’s 2006 ascendance to City Council Speaker was applauded by many progressives. She boasted activist roots, and she was the first woman and first LGBT person to hold the second most powerful position in the largest city in the country. But recent years have been marked by a steady rapprochement between Quinn and the city’s business establishment, including Mayor Bloomberg, for whom Quinn was once a regular antagonist and is now a frequent ally.

The New York Times last year called Bloomberg's support for Quinn's mayoral aspirations "the worst-kept secret in City Hall."  A July Capital New York article on business support for a Quinn mayoral run quoted Wylde, of the business-backed Partnership for New York City, saying "Christine has established credibility and a strong relationship with many members of the business community. I was, as a young person, a radical too."

In January, Quinn reiterated her opposition to the measure. Quinn warned that the bill "could cost us jobs, and cost us small businesses and their future in these tough economic times." That stance puts her to the right of her expected opponents in next year's Democratic mayoral Primary: Bill DeBlasio, Scott Stringer and John Liu.

“The electoral crucible helps us…” says Cantor. “Politics is fluid. If there’s enough education and agitation and energy, we think she’ll be open to revising that view.”

The approaching primary is one of several factors advocates cite as reasons for optimism about overcoming the Speaker’s opposition this year. These include the improving economy, Bloomberg’s declining influence, the increasing breadth of their coalition, and in particular their efforts to reduce the appearance and reality of broad small business opposition.

The version of paid sick leave that will soon be introduced in Council has been scaled back to pre-empt criticism. Most significantly, it no longer requires businesses with fewer than five employees to provide paid leave (it does require them to provide short-term unpaid leave in cases of medical emergency).

Javier Valez, Deputy Director of Make the Road New York, says the current bill is “is completely different from the one that we were debating” in 2010. He says the majority of New York small businesses have fewer than five employees.

While limiting the legislative language, the coalition—which includes major unions and the city's labor council—is working to highlight its small business support. Last week, Make the Road launched a “Conscientious Consumer Initiative," which includes a list of businesses providing paid sick days and publicly backing the legislation.  “Those voices were just not part of the conversation in 2010…” says Valdez.  “We’ve got to continue to show that there’s different voices out there that represent the small business community.”

Make the Road is distributing thousands of leaflets listing these businesses and encouraging customers to patronize them.  Advocates say such efforts clarify who the real opposition is: big business.

Cantor says in 2010 “some disinformation” and “preposterously stupid” opposition arguments “got currency because they had some money behind them…We need to do a better job on that.”

Quinn recently threw her support behind a compromise measure on a living-wage law covering some city-subsidized businesses, a cause that also had drawn a strong labor-backed coalition. Asked whether that compromise will provide cover for Quinn and others to continue opposing paid sick leave, Valdez says that while “the living wage was an important victory…the scale is totally different”: thousands of employees affected, in contrast to hundreds of thousands under paid sick leave.

City Council is expected to debate and finalize a city budget in late spring or early summer.  The coalition expects a showdown on paid sick leave to either precede or follow the budget process. Its immediate demand is for debate in the Council on the measure; such debate would not guarantee an up-or-down vote.

“If we lived in a normal capitalist country, this would be a non-discussion,” says Cantor. “But in the United States, there’s a culture of hyper-profit above all else among some in the business class, and so that makes even a modest advance into a titanic struggle.  So that’s what we’ll have.”