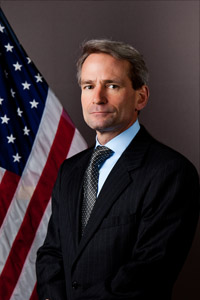 Earlier this month, Congressman George Miller (D-Calif.), the top Democrat on the House Education and Workforce Committee, complained that House GOP members were blocking the release of a National Labor Board Relations Inspector General’s report. The report, which Miller’s office was eventually able to obtain and release late Friday, shows that GOP NLRB Member Terence Flynn broke ethics rules by trading private NLRB case information for personal gain to anti-union law firms when he worked as chief counsel to GOP NLRB Member Brian Hayes during the 2010-2011 period. (President Obama appointed Flynn to the NLRB in January.)

The report (PDF) found that Flynn funneled sensitive information to Mitt Romney’s labor policy co-chair—former GOP NLRB member Peter Schaumber, who left the independent federal agency 2010—to be used in political attacks on the Board. And it recommends the Department of Justice investigate his actions.

"Given Mr. Flynn's position as a chief counsel and his years of service, he knew, or should have known, that he had a duty to maintain the confidence of the information that he received in the performance of his official duties," the report states. According to the Inspector General’s report, Flynn passed on “lead case lists, pre-decisional votes and positions of the members, the identity of counsel assigned to a case, the status of cases, the researching issues in cases, the deliberation of the former Chairman in [a case], the desire of two members to press forward in [a case], and the analysis of the Board’s resolution on” a proposed rule currently in the process of rulemaking.

Some of this information was used by Schaumber as part of a public campaign against the NLRB. The Inspector General report states that Flynn’s computer was used to edit a business plan for Peter Schaumber’s law practice to be used when he left the NLRB in 2010 (it doesn't assert that Flynn himself did this editing). The plan said that Schaumber would develop a law practice “in part by leveraging my Agency connections and focusing the attention of senior management on the likely priorities of the Obama board and strategies to respond to them.”

“Even for an agency that has at times been highly politicized, these unethical practices are unprecedented and indefensible," Trumka said. "NLRB member Flynn should resign immediately. The Department of Justice should quickly investigate and bring criminal charges if violations are found."

Trumka also called on Mitt Romney to fire Schaumber from his campaign. “These findings also will be a test for candidate Romney. A key advisor has been found to have used his inside connections in a way that resulted in the violation of ethics rules.  Allowing Schaumber to remain as an advisor will speak volumes about candidate Romney and the value he places on ethics in government officials.  He should renounce these violations and dismiss Schaumber.”

The NLRB Inspector General and Chairman Mark Pearce are not commenting on the matter, NLRB Spokeswoman Nancy Cleeland said.

Through Cleeland, Flynn said in a statement:

I intend to fulfill my responsibilities as a Board member and continue to work diligently and collaboratively with my valued colleagues in carrying out the Agency’s mission. As to the Inspector General’s report, I voluntarily cooperated fully with the investigation and provided a detailed response that for unknown reasons was not included or referenced in the summary apparently posted on the website of a Democratic Member of Congress. I am troubled by the politicization of this internal matter, in which I have committed no wrongdoing, and feel that this manufactured controversy is emblematic of the mean-spirited political theatrics that currently paralyze Washington and deter individuals from public service.

"The inspector general’s report makes serious allegations that Terrence Flynn engaged in ethical misconduct while an employee of the National Labor Relations Board," said Rep. John Kline (R-Minn.), chairman of the House Education and Workforce Committee. "Any allegation of misconduct by a public official must be reviewed."

“I have been deeply concerned about a number of developments over the last year that have threatened to undermine the integrity of the adjudication and rulemaking processes at the National Labor Relations Board,” Miller wrote in a letter to  Holder. “The Inspector General’s findings about the conversations of sensitive government information for private gain should not go without further scrutiny. In short, such actions threaten the integrity of the Board’s most vital operations.”