‘Right-to-Work’ Laws a Fatal ‘Cure’ for Wages. Why Can’t Labor Make the Case? 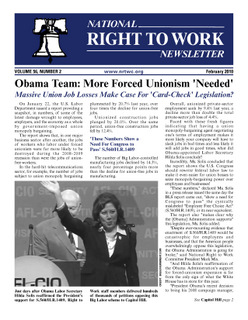 By every conceivable measure, wages in the United States are falling despite the fragile recovery that has managed to re-fuel record profits:

Against this backdrop of the shrinkage of jobs providing middle-class incomes, Republican governors, state legislators and presidential candidate Mitt Romney promote a fatal “cure” for the incomes of working families: "right-to-work" laws, which outlaw the union shop (allowing workers to benefit from collective bargaining without paying union dues) and by doing so diminish unions as a bulwark of decent living standards for all.

While it is vital not to isolate the diminished wages from other outcomes inextricably linked to right-to-work laws, lower pay is a certain result of them: Workers in right-to-work states (there are now 23, after Indiana joined the club this year) earn significantly less than in states that permit union shops, with the differential estimated to range from $1,500 to more than $5,300 per year.

Yet even with falling wages a continuing worry for the vast majority of citizens (and noncitizens), Republican legislators have been zealously pushing RTW at the state level in the name of job creation.

“ALEC [American Legislative Exchange Council] has really been a driving force, boring from within among state legislators for decades,” observed labor historian Prof. Stephen Meyer, author of Stalin Over Wisconsin and other works.

In Indiana, Republicans rammed through a right-to-work law just before the Super Bowl despite strong displays of opposition led by labor. (But a full account of the Indiana episode remains to be written, examining such questions as the relative absence of major labor and progressive leaders appearing in Indiana this year and why the State AFL-CIO chose to refrain from the strategic use of civil disobedience at a moment when the world’s media spotlight was focused on the Super Bowl in Indianapolis, resulting in relatively few media stories on the passage of the new law).

New Hampshire, with a Democratic governor, has narrowly headed off several attempts to push through a RTW law. In progressive Minnesota, polling shows majority support for a RTW law that Republican legislators want to pass in a November referendum. Even more stunningly, there are legislative efforts in Michigan, long the bastion of the United Auto Workers, and West Virginia, home of the United Mine Workers—two unions that have commanded fierce loyalty after being forged in the cauldron of employer-led violence and unwavering and creative worker solidarity.

But somehow, the U.S. labor movement has seemed unprepared for this onslaught.

Since the mid-1970s, when the Missouri labor movement fought off a right-to-work law by building a big coalition and creating the awareness of what "right-to-work" is a euphemism for and means in practice, labor has not truly engaged in fighting the laws laws at a national level.

For example, labor resistance to RTW in Idaho and Oklahoma, the two most recent entries into the RTW camp before Indiana, received very limited attention in the labor press and there was no apparent national mobilization of union members and prominent supporters.

The U.S. labor movement has continually fallen back on terminology not updated or reconsidered since 1980: “right-to-work” states are labeled “right to work for less,” as if that rhetoric alone is a trump card that will easily settle the argument over RTW. But we live in an era where thorough corporate domination has decimated old expectations about secure jobs and ever-increasing pay, and instilled new expectations that that you are lucky to have any job offered by corporations, at any wage.

And the AFL-CIO labels the majority of states that allow the “union shop”—where union membership or at least the equivalent of dues payments can be required—as “free-bargaining” states. This cob-webbed term does not seem to resonate with anyone outside a small core of labor activists, and minimizes the central appeal of unions: giving working people a voice on the job and establishing their power as full citizens in a democracy clouded by corporate power.

Labor desperately needs a new message to combat the latest offensive by corporations that addresses the most fundamental nature of RTW laws.  As historian Steve Meyer told me:

’Right-to-work’ laws are basically about returning to the 19th century idea of each individual worker having a contract with management, atomizing workers, and pitting each worker alone against the force and power of a big corporation.

The new message from labor must speak to this corporate agenda of absolute power over isolated individuals, and also focus on the collective voice for working people that unions can provide.

At a moment when so many Americans are aware of the privilege and power already in the hands of the richest 1%, all those who care about unions—and a decent standard of living—ought to be able to make the case against RTW laws much more forcefully and effectively. RTW battles aren't going to end anytime soon—and America's unions are going to have to win them if they are to avoid shrinking into nearly nothing.