In an Arizona Mining Town Left Behind, Dreams for the Future 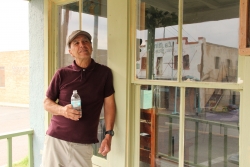 The old La Mina bar is reflected in the window of artist Tom Macias' window in Superior, Ariz.—a symbol of the past. Macias dreams of a different future.   (Photo by Kari Lydersen)

A note to readers: This and other recent Working In These Times articles by Kari Lydersen are drawn from her reporting for a forthcoming book on the history and resurgence of hard rock mining in Arizona and the Great Lakes region.

SUPERIOR, ARIZ.—The year was 1982 and the Magma Mine was closing, amidst plummeting copper prices and a bitter strike. Residents of the small town of Superior, nestled against a spectacular escarpment of red rocks jutting above the saguaro-speckled desert, were in for an economic cataclysm. The mine was the bedrock of the town’s economy; the department stores, groceries and bars that populated a bustling Main Street regularly extended credit to miners until payday. Many were in shock, many assumed the mine would soon re-open.

Tom Macias, who had worked in a variety of mining jobs, was among those who knew the town was in for some very tough times. An artist since youth, Macias began a sculpture meant to send a message to the town. Out of the rough whitish dacite stone which forms horizontal stripes across the red rock and gray-green brush of the local landscape, he created a life-size image of two figures reaching out for each other, a woman resting on top of the stone and a man scrambling up the other side stretching for her arms. The figures are thick-limbed and sturdy, evoking Diego Rivera’s peasants and workers, because of the cracks through the rock that would make more delicate figures prone to splinter.

Called "The Helping Hand," the sculpture was a plea from Macias to his fellow residents—to hang on to hope, faith and each other in the difficult times that lay ahead. Dedicated in 1982, the sculpture also marked the town’s centennial. Thirty years later, standing before the sculpture in warm but not yet overbearing March sunshine, Macias says he thinks residents have lived up to that challenge—sticking by each other as the town crumbled economically and structurally around them.

Now Main Street and the surrounding roads are dotted with vacant and crumbling storefronts, including the once-attractive stone and adobe building next to Macias’s sculpture. The population has dropped from a peak of about 7,000 to 2,800. The Magma Mine re-opened briefly in the 1990s, but only with only a few hundred employees, and it closed for good in 1996.

Unemployment now is high, young people typically leave if they can and many people are still waiting for the mine to reopen. As I’ve reported before, many are now pinning their hopes on a proposed new copper mine by a subsidiary of Rio Tinto, which needs a controversial land swap bill to pass Congress in order to move forward.

Macias opposes the new mine as planned, but both supporters and opponents of the new mine agree that if Superior is to survive and regain a piece of its former vitality, the economy needs to be diversified. People need to get creative and move in new directions to build an economy based on the town’s rich history and the talents of its current residents—not just the metals embedded in the earth.

Macias himself could be seen as an example of the attitude needed to survive and progress individually and collectively in the modern economic climate – not just in Superior. but in so many towns across the United States where the primary industry and the promise of a stable life-long job have left town, likely never to return.

In the mining industry Macias worked a variety of jobs for several companies—as an underground motorman, a mill operator, and an assayer in the former Magma copper smelter that still sits on the hill just above town.

Since the mine closed, he’s done all different types of work, often combining different occupations at the same time to cobble together a fulfilling and economically sustainable living. He currently coaches youth tennis and does home rehabbing and construction. He has also served as a town water supervisor, as a counselor and outreach director and was hired to work on a documentary called Los Mineros about the history of mining in the Arizona-Mexico border area and various other jobs. For three years he made and sold jewelry.

"You have to have an attitude that you could do anything," he said. "If someone asks 'Can you do this?' I say yes, then ask, 'What is it?'"

Through it all, Macias has continued an active artistic career, recently selling about half the paintings in a show focused on different visions of bottles—in surrealist, cubist and other styles, including a realistic "message in a bottle" tossing in ocean waves.

Like the Helping Hand sculpture, his work often references Superior’s natural surroundings. In one sculpture, a sinewy torso emerges organically from a piece of a great fallen oak.

On a plateau above the town sits Oak Flat, where the desert ecosystem abruptly gives way to an unlikely oak forest. If the land swap for the proposed Resolution Copper mine passes, that federal land would be transferred to Rio Tinto and could cave in as copper is mined below it.

Macias and other opponents of the plan for "block cave" copper mining think the massive operation would suffocate the growth of new artistic, cultural and recreational pursuits in Superior.

But proponents, like Lucy Wing, think a boost from the region’s old industry is crucial to give people the economic breathing space they need to let new ideas and pursuits flower.

Wing’s father and uncle, Chinese immigrants, started the town’s two competing general stores eight decades ago. Miners paid them on credit, extended even during strikes when it was unclear whether they’d be repaid. Wing’s father kept his store open several hours later than his brother’s store, giving him a competitive advantage but meaning Wing and her 10 siblings had to put in lots of hours helping out.

Wing left Superior for college, and then went to New York City where she worked for 42 years as a chef and food writer for major food companies and home-life magazines. After the 9/11 attacks, she and her husband decided they didn’t necessarily want to stay in New York, and Wing wanted to give back to her hometown. So after a several-years-long fundraising and planning process involving several siblings, she opened a gourmet but affordably-priced Asian barbecue restaurant in Superior.

She wanted to introduce locals to a more multicultural experience and to healthier fare than that of the few diners and Mexican joints already in town. It wasn’t easy, since many wanted the egg rolls and other fried "Chinese food" they were accustomed to, not the delicately seasoned, grilled pan-Asian dishes Wing was intent on preparing.

More importantly, even with Wing keeping prices as low as possible, most Superior residents have little disposable income for eating out. Wing thinks the new mine would give locals enough money to feel comfortable trying new things and expanding their horizons. "Now people just barely have enough for necessities," she said.

Mentioning another local’s plans to open a bar and steak house, she shook her head discouragingly and said, "You need people to be working if they are going to pay $20 for a steak. You’re talking (right now about) a rice and beans and cheese economy."

Symbols of the current struggling economy surround Macias’s home. The once-grand but now boarded-up Magma Hotel is just downhill; a vacant lot and several empty, sagging buildings are across the street. The La Mina bar directly across from his porch is still in business, filled with relics of mining days of yore. But it is often closed and doesn’t bustle like it used to.

Nevertheless, Macias sees promise and hope in these streets rather than nostalgia or despair. It’s not clear exactly what his vision for the town’s future holds, but to realize it he thinks people need to let go of the past.

"It’s not good to look back to things that don’t exist anymore," he said. "We shouldn’t just wait around hoping it will come back. We’re on a different path now. Let’s relish the journey."