2 Years After Upper Big Branch Disaster, Coal Baron Blankenship Is Gone. What Else Has Changed? 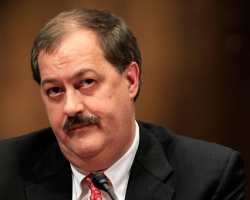 As friends and families of dead miners mark the second anniversary of the Upper Big Branch Mine disaster on Thursday, April 5, there is precious little consolation in the way of improved safety laws or industry-wide reforms. But it’s probably fair to say that the most positive change coming from the needless deaths of 29 men in West Virginia that day is that notorious coal baron Don Blankenship has finally been banished from the mines.

Blankenship, chief executive of mine operator Massey Energy Co., was already a well-known figure in West Virginia business and politics when the explosion took place at the Upper Big Branch. With an outsized personality, he had made himself famous in the Appalachian coal fields as a financially successful executive in a tough industry, an outspoken critic of mine regulation and an unremitting enemy of the United Mine Workers of America (UMW).

But the mine tragedy—the worst in 40 years—spread his fame far beyond West Virginia. Any reader of the national press soon learned Massey was guilty of repeated safety violations at the Upper Big Branch and at other mines. They also learned that Blankenship had systematically immersed himself in suspect political maneuvering to protect the profits of his operations. And they learned that his anti-union obsession had created an atmosphere of fear and intimidation throughout his firm. (An internal review of the Labor Department's Mine Safety and Health Administration chided the agency last month for not prosecuting the company for these violations. An independent review of MSHA's conduct requested by Labor Secretary Hilda Silis and released last month in part blamed the federal agency's inaction for the disaster.)

In the immediate wake of the Upper Big Branch funerals and memorials—one of which was attended by President Obama—Blankenship maintained a tone of injured innocence, even defiance. But as it became increasingly clear that the deaths were preventable and that Massey itself bore the brunt of responsibility, Blankenship became uncharacteristically circumspect, even subdued.

What the outside world didn’t know at the time was that Blankenship was beginning to face a far bigger threat to his coal barony than bad public relations. At the time of the disaster, Massey was a publicly held corporation, with a diverse set of stockholders and board of directors with ultimate control over the company’s fate. And the board, which had always supported Blankenship in the past, was beginning to see the flamboyant chief executive as a liability, not an asset.

“It all took place behind closed doors, but from everything we heard, he wanted to keep his job as president and was absolutely opposed to selling the company,” said Phil Smith, a UMW spokesman. But the board, now headed by retired National Security Agency director Adm. Bobby Ray Inman, had other ideas, Smith said. They wanted to get rid of Blankenship and sell the company to the highest bidder.

It took some time, but the board moved steadily toward its goal. Seven months after the Upper Big Branch explosion, reports began appearing—notably in the Charleston (West Va.) Gazette’s excellent mining blog Coal Tattoo—that the company would be sold and the buyer would be Alpha Natural Resources, a Virginia-based mining corporation that was one of Massey’s leading competitors.

Sure enough, Blankenship announced his resignation from Massey on December 31, 2010. In January, the board revealed a deal was in place to sell the company to Alpha for $8.5 billion. The transaction was finalized in mid-2011.

Predictably, Blankenship was well paid to go away quietly. Securities & Exchange Commission documents state he received about $12 million in severance, and a deferred compensation package worth about $27 million.

With Blankenship gone, “working in the coal fields is not as dangerous as it was two years ago,” UMW’s Smith commented. Alpha Resources “recognized that the Blankenship ‘culture’ at Massey was a problem” and has taken steps to improve safety conditions, he said. “Generally speaking, they (Alpha) have a better safety record,” than Massey, and a settlement agreement with prosecutors from the U.S. Department of Justice mandates further safety improvements, he said.

Still, there is a sense that Blankenship and the other senior executives at Massey have escaped justice, Smith said. “There were 50 deaths of miners at Massey over 10 years. Blankenship bears much of the responsibility, and the board is just as culpable,” he said.

Punctuating the sense of justice denied was a recent report in Coal Tattoo that Blankenship’s name had appeared in official documents about the creation of a new coal mining company based in Kentucky. Although no further information has surfaced that Blankenship is planning a return to the coal fields, the news is a grim reminder that the disaster at the Upper Big Branch has not spurred the kind of systemic change needed to fully protect the lives of miners.

Congress has not passed any legislation tightening mine safety regulations, although federal regulators have asked for tougher penalties to be enacted so companies will play by existing rules. Yesterday the industry announced a new voluntary safety program aimed at reducing mine fatalities to zero, the Wall Street Journal reported. Six mine companies have signed onto the new safety initative, including Alpha Resources.