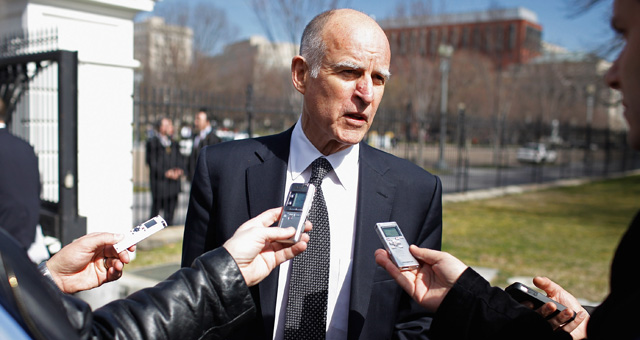 Some supporters criticize the deal and the unions that sided with Gov. Brown months ago

On Wednesday, an advisor to Jerry Brown announced the suspension of signature-gathering on a tax referendum California’s governor had previously pushed for the November ballot. Brown’s move follows a deal reached last month with backers of a more progressive alternative, the “Millionaire’s Tax.” Unions that spent months backing two competing referenda have now coalesced behind a compromise—though not everyone from the old Millionaire’s Tax coalition is on board.

“This is a major improvement,” says California Federation of Teachers President Josh Pechthalt. Rick Jacobs, the chair of the labor-backed advocacy group Courage Campaign, calls the compromise “the most progressive tax” in California’s history.

As I reported in January, labor support was split between two tax referenda for November’s ballot. A year ago, the CFT (an AFT affiliate) and the Courage Campaign were among those spearheading a coalition, Restoring California, to push for the Millionaire’s Tax, a permanent levy on seven-figure incomes (under state law, referenda land on the ballot if they are submitted with sufficient signatures and legally-appropriate wording).

But in December, Democratic Governor Jerry Brown announced what he called a “balanced” alternative, combining an increase on upper bracket income taxes with a half-cent sales tax increase—both temporary. The plan was quickly endorsed (and reportedly pre-vetted) by some major unions—some of whose locals had previously endorsed the Millionaire’s Tax.

Brown and his allies said that his plan was more responsible and would not inspire concerted business opposition; Pechthalt and others said that a sales tax was worse policy and worse politics (a separate tax measure backed by attorney Molly Munger is likely to also be on the ballot). Both sides expressed concern that having multiple measures on the ballot could lead voters to reject all of them.

But on March 14, they reached a deal. Brown and CFT are now circulating petitions for a compromise: a quarter-cent sales tax, combined with an increase on incomes over $250,000 a year. Both sides had agreed that Brown’s measure would remain in play in case the new compromise couldn’t get sufficient signatures in time, but it was pulled last week. The income tax under the compromise measure would last seven years, rather than five; the sales tax would last four. It will also be called the “Millionaire’s Tax.”

Pechthalt says it’s a victory worth celebrating. He notes that a year ago, Democrats and labor were poised to support even an “overwhelmingly regressive” tax proposal because “it seemed to be the only viable option for generating more revenue.” That attempt at a bipartisan deal died, says Pechthalt, only because Brown could not find Republicans to back it. He credits Occupy, student activism, and the Millionaire’s Tax for transforming the sense of what’s possible in the year since. Under the new measure, says Pechthalt, “the regressive piece has been cut in half.” In the first year, nine billion would be raised—two billion more will be raised than under the old Millionaire’s Tax, and eight of the nine billion would come from the income tax hike.

Pechthalt and Jacobs say that by March, both sides had increased motivation to compromise: Brown, because the Millionaire’s Tax was poised to make it onto the ballot; and the Millionaire’s Tax coalition, because they lacked the resources to win in the fall. With the Millionaire’s Tax consistently outpolling Brown’s proposal, Pechthalt says legislative leaders were warning the Governor that it could doom his proposal’s chances. Meanwhile, says Pechthalt, “we were not confident we would have very many resources to run even a very modest campaign.” “We were in a war—starting to be—on the progressive side of the structure here,” says Jacobs, “and that was not a good place to be.”

But not everyone's on board. Amanda Armstrong, a head steward for UAW Local 2865 at UC Berkeley, says she’s “dissatisfied that the CFT, but also other unions, earlier, basically abandoned the millionaires tax initiative and basically capitulated to what incredibly strong pressure from the Governor.” (Full disclosure: The UAW and AFSCME are both In These Times sponsors.)

Armstrong, who’s also active with Occupy Education, says that while the compromise is “much better than the Governor’s initial proposal,” the inclusion of a sales tax “really muddies the political content of the initiative.” Whereas the old proposal offered “an opportunity to clearly articulate a kind of politics of redistributing wealth from property owners, the 1%...to meeting people’s basic needs,” she says the compromise “doesn’t break with this notion of shared sacrifice,” or “the politics of austerity.”

Jacobs says he understands there’s been “a time of mourning” for some progressives over the compromise, because “this was a movement-based campaign” to an extent that hasn’t been seen behind a tax measure since the right-wing Prop 13 in 1978. “Here we had a movement-based campaign in a progressive direction," says Jacobs and now it has become something different.” However, he warns that with California's several-billion dollar deficit, the consequences of failure would be “really unthinkable.”

Armstrong says when students marched from the Bay Area to the capitol in Sacramento in support of the Millionaire’s Tax, it was in part because CFT leaders told them “they needed political support in order to make the millionaire’s tax viable.” “The people who were in the inner circle with the Millionaire’s Tax were basically encouraging the grassroots movement to take on the issue,” she says, “but not to be actively involved with the decision-making process.”

Pechthalt acknowledges that “we probably could have had a more transparent process.” But he says that while the measure “may have had community support…at the end of the day, there are a group of people who put their resources and their organizations behind the thing, they’re the ones who have to call shots. We couldn’t hold town hall meetings to make these decisions, and frankly the Governor wouldn’t have gone for it anyway.”

Pechthalt says that “very few” of the signatures for the more progressive measure were collected by volunteers—rather, almost all came from paid signature-gatherers. “If the movement had been so strong,” says Pechthalt, “why was it that it was my organization and the community organizations that put in 99 percent of the money... ?” Armstrong says CFT had indicated to activists that “they didn’t really need support in terms of signing people up for example, or they didn’t really need help with fundraising.”

Pechthalt told In These Times in December it would be more difficult to galvanize union members to volunteer on behalf of Brown’s proposal because it included a regressive sales tax. Asked last week whether the new compromise will face the same challenge, Pechthalt says “it is a bit more difficult,” but “we’re trying to put this in some context.” He says a “united effort” behind the “overwhelmingly progressive” current compromise will fare better than a push for the more progressive version could have in the absence of “broad labor support and the support of the Democratic Party.”

Among the points of contention is where the money will go. The old “Millionaire’s Tax” guaranteed that some revenues would be used for higher education. The new one doesn’t. Pechthalt says he asked the governor’s staff to include such a guarantee in the compromise, but was rebuffed because legislative leaders wanted to first address “programs for the poor” and then turn to education.

Armstrong says an Occupy Education assembly considered continuing to gather signatures for the original Millionaire's Tax, but decided against it because it seemed "more or less a lost cause." She says that given many members’ “ambivalence about the compromise and the prospects for actively organizing around it,” her local is now prioritizing pressing the legislature to spend any new revenues on education and social services. Jacobs says he hopes that the budget process, by illustrating what the state budget will look like with the new revenues versus without them, will galvanize currently disappointed activists to push for it to pass. The more progressively the legislature agrees to spend the potential revenues, argues Jacob, the more motivated progressives will be to fight for them.

While Armstrong is disappointed with CFT, she says “much more responsibility” lies with the unions that backed the governor’s proposal over the Millionaire’s Tax months ago. Armstrong says “It would have been a huge challenge” to pass the Millionaire’s Tax while unions including SEIU, AFSCME, and the NEA-affiliated California Teachers Association were in the governor’s camp. “Traditional power broker unions in this state easily could have made a difference in this,” says Jacobs. “There’s no question about it.” He says it “got complicated for folks who have business before the state and the governor” to “find themselves feeling as if they were on the opposite side of him.” With “the support of other unions earlier in the game,” says Pechthalt, the measure “might have even been more progressive than it is now.”

Reached over e-mail, SEIU California Council Spokesperson Michael Cox agreed that the new compromise represents an improvement over Brown’s earlier proposal. Asked whether the outcome would have been different if SEIU had been backing the old Millionaire’s Tax, or if CFT hadn't, Cox said, “I think this is a story of like-minded groups with similar goals…coming together to get it done. We got to the right place, and we’re united to get it passed in November.”

While the new measure polls well, passage in November is by no means guaranteed. “Any revenue measure would face significant obstacles,” says Pechthalt. He says the effort would be aided if others that had backed the Millionaire’s Tax get behind the measure. “At the end of the day,” says Pechthalt, “I think they will probably come on board.”