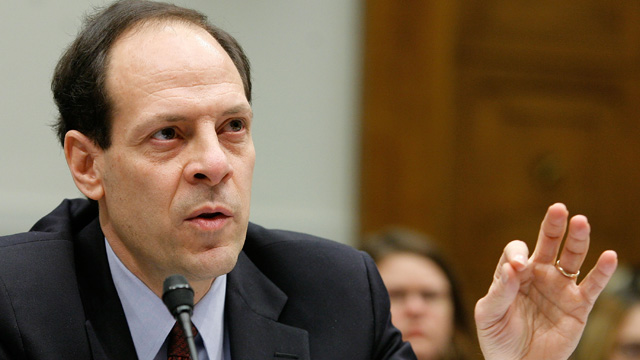 The 'revolving door' in action—and some see ethical breach

WASHINGTON, D.C.—As the Inspector General at the Department of Justice during the Bush administration, Glenn Fine received praise from many for investigating Attorney General Alberto Gonzales' firing of U.S. Attorneys for political reasons. Progressive blogger Marcy Wheeler, who covered the U.S. attorneys scandal, said that unlike other inspector generals during the Bush Administration, Fine was “effective."

Ironically, after uncovering the politicization of DOJ, Fine is now defending Terence Flynn, a man who allegedly politicized the National Labor Relations Board by passing confidential information to Republicans who have attacked the federal agency, which enforces labor law and mediate disputes between unions and employers.

Like many in Washington, Fine cashed out of a government post to work in the private sector—in his case, the corporate law firm Dechert. He was recently hired by Flynn, who faces charges of ethics violations leveled by the NLRB Inspector General for his role in passing information to Mitt Romney's labor policy adviser, Peter Schaumber. According to a transcript of an NLRB Inspector General interview with Flynn released last week, Fine was present as counsel and pressured NLRB Inspector General Dave Berry to drop his investigation, or give the report to Flynn before making it public.

Fine, though, may have a financial conflict of interest in representing Flynn. The law firm in which Fine is a partner, Dechert, represents employers in cases against unions in front of the NLRB. (A recent example was a case involving 70 SEIU members locked-out of a Brooklyn apartment complex by a property company.)

“In my opinion, I think what Fine is doing is unethical,” says University of Wyoming Law Professor Michael C. Duff, who served as board agent for the NLRB from 1997 to 2006. “But even if the rules are technically being complied with—and I'm not conceding they are—the perception is obviously terrible. "Furthermore, Professional Conduct rules strongly imply that lawyers should avoid even the appearance of impropriety...”

Fine disagrees. "I don’t think that we do have a conflict of interest," Fine told In These Times. He declined to comment further.

Duff adds that whether or not Fine broke any rules by representing Flynn, he thinks there is something wrong with the fact that a public servant like Glenn Fine—who was DOJ inspector general for 10 years—would cash out to defend an NLRB member accused of politicizing NLRB judicial decisions.

“On less technical policy grounds, it seems increasingly hard to justify this kind of revolving door 'government to private sector at will' practice. It is usually said that if we restrict this practice, excellent people will be less likely to enter government practice for fear of being disqualified from later entering into more lucrative private practice, Duff says. "But given the number of excellent new lawyers currently unable to find employment, I have little doubt that we would find plenty of takers for government jobs...”