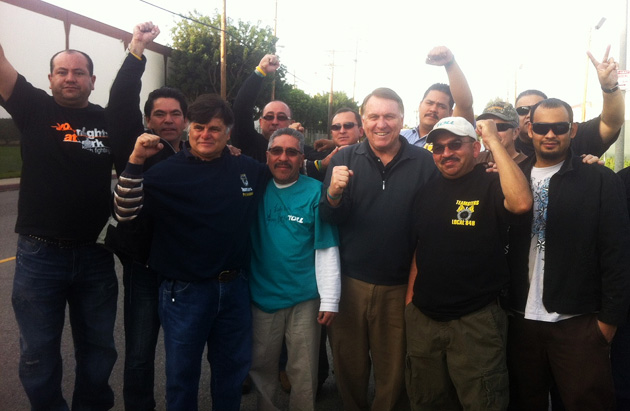 Wednesday night, the National Labor Relations Board announced that truck drivers at the Port of Los Angeles had won a rare union election. The 46-to-15 vote is a major step forward in the Teamsters' campaign to transform the overwhelmingly nonunion port trucking industry—though it’s no guarantee of a union contract with their employer, the $8.8 billion Australian logistics company Toll Group.

"When they tried to push us down, they only managed to make us stronger..." said Toll driver Karael Vallecillo on Thursday.  "This is just the beginning of the big war."

Wednesday’s was one of the first union elections held by U.S. port truckers since the deregulation of the industry in the 1980s. For most of the country’s 110,000 port truck drivers, NLRB elections aren’t an option. As David Bacon has reported, port truck drivers are frequently misclassified as “independent contractors” who aren’t employed by the companies they work for and thus aren’t eligible to file for an election. But Toll's LA workers are classified as employees. Writing in the Australian newspaper The Age, reporter Malcom Maiden traced that difference to a Port of LA requirement—since overturned by an appeals court—that companies directly employ drivers.

Reached during a union rally the night before the election, two-year Toll driver Alberto Quinteno said he began organizing with the union after he and some co-workers tried taking concerns to management: “You know, basic human being treatment, like a clean toilet.”  When workers asked for daily bathroom cleaning, Quinteno says Toll refused. He says when workers asked for clean drinking water, “They gave us water, but they left it in the sun…it was tasting like plastic…they didn’t even give us cups.”

In December, Toll worker Xiomara Perez joined port truckers from six other ports in a writing a letter to the Occupy movement and the broader public.

“Just like Wall Street doesn’t have to abide by rules, our industry isn’t bound to regulation,” they wrote.  “So the market is run by con artists…We receive Third World wages and drive sweatshops on wheels.”  In January, Perez and her Port of LA co-workers filed for an election.  In February, hundreds of port truck drivers in Washington State struck for two weeks and massed at the state capitol demanding a crackdown on misclassification. LA workers joined them in wearing wristbands reading “Our fight is your fight.”

The union charges that Perez’s firing was part of an aggressive—and often illegal—anti-union campaign waged by Toll since last year. In January, the National Labor Relations Board issued a complaint (the equivalent of an indictment) against Toll for anti-union actions including illegally interrogating, harassing, retaliating, and discriminating against workers.  Perez was ostensibly fired for stopping at a McDonald's bathroom on her way to make a delivery (she made the delivery on time anyway). Another prominent worker activist, Steven Chavez, was ostensibly fired for using a company vehicle, during his lunch break, to drive to renew a Department of Transportation certificate (Chavez says he had a supervisor’s permission).

Quinteno said Tuesday that management held mandatory anti-union meetings roughly every other week in months leading up to the election. He said these meetings included a series of anti-union speakers, from a man who said that he and his entire family had been union members, to one of Toll’s top executives.

“They try to find to find out who is pro, who is against…There’s a lot of people that are scared about the fight, because knowing about how bad the economy is now, everybody needs a job to feed their families.”

In an e-mailed statement, Toll did not address the pending NLRB complaint, but noted that some of the union’s NLRB charges have been withdrawn or dismissed, and that the NLRB has not so far issued any final verdicts against the company. Toll touted its wages and benefits as “competitive” and “among the best in the industry."

TWU says that Australian workers have good working conditions and constructive labor relations with the company. The Age’s Maiden wrote of the company’s U.S. workers, “by our standards, they get a pittance.” But Sheldon told an LA crowd that if Toll succeeded in busting the union in the U.S., Australian workers would be threatened as well.  "When America makes a decision, Australia soon follows."

"If they want to fuck with you," TWU Senior Official Michael Aird told a group of U.S. workers, "if they want to treat you with this sort of disrespect, then there will be a consequence for them."  TWU helped spearhead outreach to Australian media and politicians, making Toll's U.S. labor relations a national story in Australia. The Australians’ involvement contradicts a common stereotype of international labor solidarity as an act of charity, granted by Americans to workers elsewhere.

U.S. workers, including Quinteno, also visited TWU workers Australia. He says that after seeing the conditions there, “I thought, hey, if they have the royal treatment, why don’t we?”  Having TWU members’ support, says Quinteno, “gives us a lot of hope…it gives us the strength to continue our fight.”

"I didn't come to this country to be treated like an animal just because of my background," says Vallecillo.  He and half a dozen co-workers formed a committee of union leaders at work.  "We had rallies against the company..." says Vallecillo.  "We talk to the drivers.  We tell them this company is trying to scare them...we tell them we can't lose."

In February (for Alternet) I asked TJ Michels, a spokesperson for Change to Win, the labor federation that includes the Teamsters, why the union was pursuing an NLRB election despite Toll’s alleged law-breaking and the weakness of U.S. labor law.  Michels said that while workers would have preferred “a fair process”, and knew the election would be “like going through a meat grinder,” they decided they were ready for it.  The workers received support from TWU, port truck drivers in other cities, U.S. and Australian politicians, and a team of community monitors that interviewed workers and reported on the company’s anti-union campaign.

If Wednesday’s victory represents a turning point for port truck drivers, it may be less as a legal amulet than as a show of strength and solidarity. Roughly half of workers who win union elections are without a contract a year later, in part because U.S. law offers employers ample opportunity to challenge or stall election results and offers no requirement that companies make concessions in negotiations or submit to arbitration.

But the government-certified 3-to-1 victory is likely to draw notice from currently misclassified drivers elsewhere in the United State, by U.S. politicians unions will push to address misclassification, and by media, customers, and workers in Australia, where Toll doesn’t have a reputation for bare-knuckled union-busting.

"There's a lot of drivers that's been treated the way we've been treated..." says Vallecillo.  "I think this is going to be some kind of inspiration for them."

In its statement, Toll indicated no plans to challenge the result, emphasizing instead that the vote “affects a small proportion of our total U.S. workforce, and an even smaller proportion of our 45,000 employees…”  Toll said, “We welcome the conclusion of this campaign and recognize our employees’ decision.”  The company pledged to “negotiate with the union in good faith,” and said that it “will begin what is expected to be lengthy negotiation following an expected hiatus of 30 to 45 days, as required by U.S. law.”

Change to Win spokesperson Coral Itzcalli says that given Toll's record, its commitment is little comfort: "We expect the company to kick and scream every step of the way...We expect it to be a fight, but we're also very confident of how united the workers are."

Asked whether he expects Toll to resist negotiating a fair contract, Vallecillo says, "They will try, but they won't be able to do it, because we are strong and we won't back down...You can't expect anything from the powerful people.  You have to get it yourself and fight for it."