A Toast to a Good Employer: New Belgium Brewery 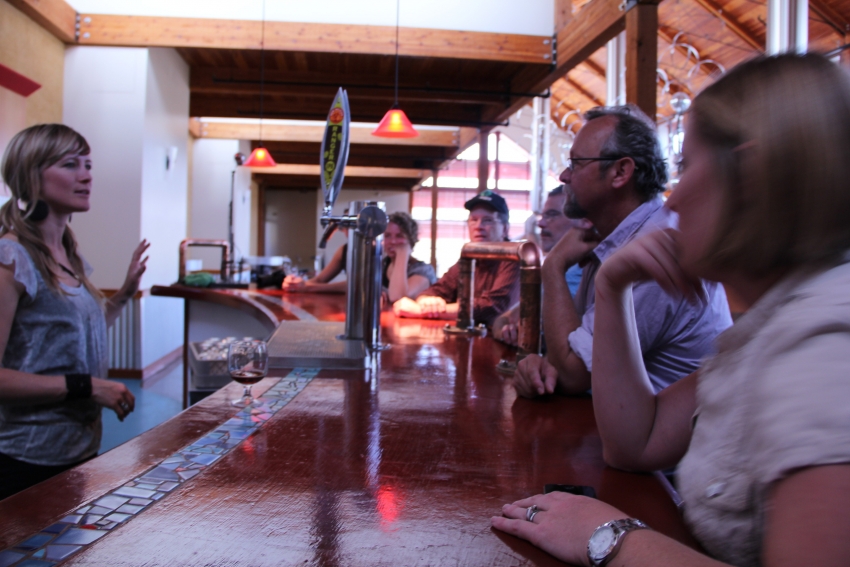 FORT COLLINS, COLO.—Working at the New Belgium Brewery here seems too good to be true. Maker of the well-known Fat Tire beer and other nationally-distributed craft brews including Skinny Dip, 1554 and Blue Paddle, the brewery employees about 450 people in this college town,  and recently announced it is opening another brewery in Asheville, N.C.

In Fort Collins and Boulder you hear so much about environmental sustainability that it almost becomes overwhelming. Using clean energy, recycling religiously, biking to work and otherwise living a sustainable lifestyle is the norm. So it’s no surprise that New Belgium has an impressive and aggressive commitment to maintaining a minimal carbon footprint, dealing responsibly with waste and water and lobbying for clean water and air and other environmental causes.

But the company extends its sustainability commitment to the well-being of workers, who co-own 43 percent of the company through an ESOP (employee stock ownership program) and have a collective say in nearly all company decisions, from strategic long-range planning to daily choices, according to sustainability manager Katie Wallace.

This post may sound like shameless public relations for the company, but their stated commitment to a sustainable work environment seems to hold up under closer examination.

The Chicago nonprofit organization Winning Workplaces also thought so when it named New Belgium one of the country’s best small workplaces in 2008, in the annual competition it ran in conjunction with The Wall Street Journal. Winning Workplaces' lengthy evaluation process is rigorous and fact-based, and involves randomly selected workers. I sat in on the process several years ago, and think it does identify unusually good employers, while aiming to show how good employment practices can also result in a healthy bottom line.

During a tour of New Belgium’s brewery earlier this month, Wallace pointed out artworks from tile mosaics to bike rim hanging sculptures to shadow boxes designed by employees and celebrating the company’s fun-loving, artsy and outdoorsy mentality.

She noted that employees get one of the company’s signature red bikes (along with 13 paid personal/vacation days annually) after their first year on the job, and afterward they get an expenses-paid trip to Belgium, where co-founder Jeff Lebesch got the idea for the business on a mountain-biking trip in 1989.

All employees have access to the company books, and to financial literacy training to help them understand them. And they get one paid hour off for every two hours of volunteering in the community (up to a limit, presumably).

Since New Belgium is still a business despite all the feel-good rhetoric, I was curious how all these policies (including their strict environmental commitments) affect the bottom line. Wallace told me that they have never done an ROI (return on investment) analysis measuring the exact economic effect of their social and environmental policies, and they don’t necessarily see that as appropriate since standard financial analyses typically only look at relatively short-term and concretely quantifiable impacts.

They see the financial payoffs of their policies as much longer-term and harder to quantify, but concrete nonetheless. Low turnover and higher productivity are typical benefits employers note from employees who are treated with dignity and earn a stable and satisfactory living.

Wallace mentioned some more indirect benefits. For example, employees are often enthused about coming up with new ideas to save water; some ideas are ultimately implemented to save the company money. She said:

We spend a good portion of our waking lives at work, and want to make sure people have a sense of thriving while they’re there. People feel very fulfilled by working for a co that shares their values—they also feel fulfilled by the fact that they can participate actively in that process.

We wouldn’t be as successful in the areas of environmental sustainability as we are today if we didn’t have the involvement of all our coworkers. It’s a really collaborative process, one that requires the engagement of everyone from entry to executive level.

We’re vigilant about our economic health, but our decisions are really based on intuition and investing in people ... we will see the dividends from that. We know we are profitable; and benefits don’t always show directly, they’re not always easy to measure, but our experience proves their worth. We had times when money was tight, when we were involved in large capital investment or had lower-than-expected revenues – and our management team will always consider how can we cut costs. We had employee pieces on the table (for possible cuts) but we never ended up giving them the axe because we define success so broadly that cutting that out wouldn’t look like success to us.

I asked Wallace if workers had ever discussed unionizing. Not to her knowledge, she said:

I understand unions can be helpful when there’s more anonymity and you don’t know the people making the decisions. Here we’re all very well connected. We know management has our best interests in mind and we have theirs. We all consider ourselves part of the same economic and career unit.

You periodically hear such rhetoric from businesses with a socially conscious image—like Whole Foods and Starbucks—and then horror stories begin to trickle out about unionizing campaigns squashed and employees treated badly. So it’s of course always worth taking any employer’s words with a grain of salt. But it appears that in New Belgium’s case the idealistic proclamations may really be true.

If so—if a company can actually be profitable and competitive while creating hundreds of jobs in a down economy—that’s something to drink to.