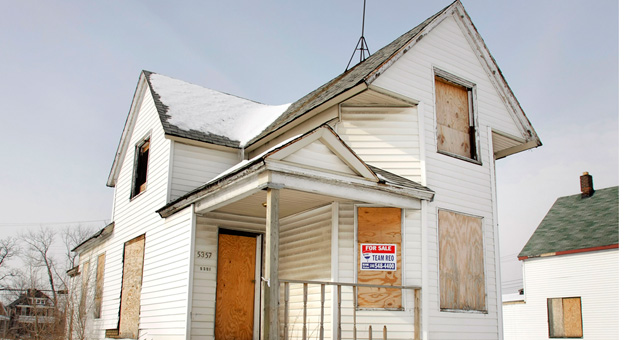 "The time it takes us lawyers to win even the easiest of victories means most homeowners will not be helped. ... When people try to get modifications, the banks tell them documents are lost, and give contradictory information. People are told, ‘You can’t be helped unless you’re behind in your payments,’ and later they’re told, ‘You can’t be helped because you’re behind in your payments.’”

Much of the once-grand city of Detroit has been reduced to a ghostly ruin, and the recent upturns in profitability of U.S. auto firms have hardly helped it, since the companies have few plants left in the city. The heralded rebirths of GM and Chrysler hasn't helped workers much, as the Obama administration declined to insist on shoring up auto production in the United States in return for massive federal loans.

Abysmal poverty afflicts the city; 40,000 households have suffered water shutoffs. The specter of thousands of new home foreclosure stalks the city, threatening to push more Detroiters out of their homes on top of the 67,000 bank foreclosures—more than 20 percent of all household mortgages—that hit the city between 2005 and 2009 alone. The city already has an estimated 50,000 to 70,000 vacant homes. With the ongoing wave of foreclosures, home values have been plunging. Foreclosed homes sell for $38,000 in Wayne County and less than $11,000 in Detroit, according to RealtyTrac.

With little realistic prospect of besieged homeowners getting help from overwhelmed lawyers serving the poor, or Obama administration programs (see here and here), United Auto Workers (UAW) Local 600 has been stepping in to help fight foreclosures. Working closely with groups like People before Banks, Occupy Detroit, Moratorium Now!, Jobs With Justice, and other groups, Local 600 has been an integral part of actions that have succeeded in blocking evictions. “All the good guys came together in an ad hoc coalition,” explained Vinny Pfursich, editor of Local 600’s newspaper.

Local 600 has 10,000 active members and about 15,000 retirees. It represents workers at 40 diverse workplaces, including nurses and lawyers as well as the traditional base of Ford auto workers at the River Rouge plant.

Labor educator Steve Babson, a leader of People Before Banks and author of Working Detroit, recounted a recent action that was “a scene straight out of Charles Dickens." An elderly African-American couple, with husband William legally blind, missed some mortgage payments to the New York Bank of Mellon Trust. In a sheriff’s sale, the bank bought the home for $12,000, meaning that the Garretts would have to move from their home of 22 years in the dead of winter.

At one point, Bertha Garrett thought that she had persuaded the bank sell the home to the Garretts for the $12,000 that the couple had managed to scrape together. But then the bank backed out of the deal, insisting on a sale price of $24,000, far out of reach for the couple.

Usually, what happens next step in the foreclosure process is the arrival of a truck hauling a dumpster, with a crew ready to throw out a family’s belongings.

But UAW 600 and its allies confronted the would-be eviction team with a tactic appropriate to the Motor City: cars and lots of them. The anti-foreclosure forces surrounded the Garretts’ home with dozens of cars, and the bank’s evictors were shut out. When the eviction squad called in the police, officers came to the scene but dismissed it as a “civil matter” and drove off. That left the anti-foreclosure forces still in command of the situation, and the evictors left the scene.

Meanwhile, some 40 protesters—about half from Local 600—picketed outside the Mellon bank to publicize its treatment of the Garretts. With the eviction foiled and the prospect of bad publicity growing, the Mellon bank relented and sold the Garretts’ home back to them for $12,000.

Local 600’s role in the fight against foreclosures is in keeping with its history of militancy, outlined in Thomas Sugrue’s book The Origins of the Urban Crisis: Race and Inequality in Postwar Detroit. “We’ve got a history of social activism," Local 600’s Pfursich says. Based primarily at the River Rouge complex, Local 600 caught on very early to the first signs of corporate flight from unionized plants in the U.S. North.

In 1951, Local 600 filed an historic lawsuit challenging Ford’s layoffs resulting from its relocation of jobs. But Local 600’s position found more support among local city councils and the public than it did with UAW President Walter Reuther, according to Sugrue: ”The reluctance of the UAW (and most other unions) to challenge sacrosanct business practices [like plant-location decisions] limited the possibilities of resistance to de-industrialization.”

Local 600 was also out in front of the rest of labor in backing the rights of African-Americans to live anywhere they wanted, and fought against the rigid system of housing segregation that kept blacks confined to a cramped, tiny slice of Detroit at a time when the city’s population was growing rapidly.

Today, the housing issues are quite different, as the city is contracting painfully, losing 25 percent of its population 2000 to 2010 and growing more impoverished. But Local 600 appears deeply committed to the fight against foreclosures, with another action set for today (Wednesday) to prevent a family from being evicted in the nearby town of Inkster.

Local 600’s activism in fighting foreclosures has the potential for energizing other locals of the UAW and other unions. If Local 600 can have a substantial impact in a metro area of  4.3 milllion, then unions concentrated in medium-sized factory towns of 40,000 to 100,000 have the potential to exercise at least as much power.

The efforts of nonprofit and faith organizations have mostly focused on trying to help potential foreclosure victims use federal programs and negotiate loan modifications with the banks. But nationally, there is a growing awareness of the futility of the main anti-foreclosure programs and the general unwillingness of banks to negotiate lower mortgage payments. With many Americans fed up with bailed-out banks forcing families out of their homes, unions like Local 600 could be a part of the Occupy movement's spring offensive focused on preventing foreclosures.