‘We Don’t Go to Work to Be Touched’: Sexual Harassment in the Warehouse 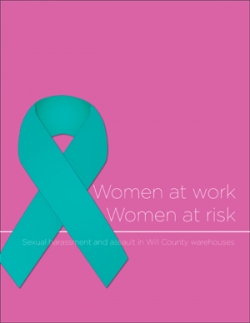 But constant remarks about their bodies, and unwanted touching, advances, mean-spirited "pranks" and other forms of sexual harassment are a regular occurrence for many of the more than 30,000 women—like Dickerson—who work in the warehouse industry in the Chicago area, according to a report (PDF) released this week by the group Warehouse Workers for Justice (WWJ). And women often face retaliation for reporting harassment.

In an extreme example that is currently the subject of a lawsuit, 19-year-old Priscilla Marshall, her mother and her teenage friend allege they were repeatedly subject to aggressive and abusive sexual assaults and language by a 45-year-old manager at the Partners Warehouse in Elwood, Ill. After the three women and Marshall’s uncle and the mother’s boyfriend complained, they were fired or suspended and accused of theft, which resulted in Marshall and her mother spending 15 and seven days in jail, respectively, according to the lawsuit filed March 9.

WWJ's Leah Fried told me that the same industry structure that allegedly allows for widespread violations of labor law, extremely low wages and unhealthy conditions also contributes to a climate of unchecked sexual harassment and retaliation. The warehousing (or logistics) industry is based on layers of subcontractors, so that major companies like Wal-Mart rarely own and operate the warehouses where their goods are stored and distributed. Fried said:

A major factor is the layering of management, it’s another way the owners say of WalMart shirk responsibility and subcontract and subcontract so no one is taking responsibility for a very basic legal obligation (avoiding sexual harassment). There’s also the low unionization rate – because so many jobs are temp jobs and because very few warehouse workers have a union, it makes it easier for management to get away with violating people’s rights. Not having a union is a big deal – and a big reason people can be exploited more easily.

WWJ (launched by the United Electrical workers union, for which Fried is an organizer) is trying to fill the gap by educating women and men about sexual harassment and their rights and responsibilities, and providing resources for legal action and a forum for organizing and leveraging community support. Various elected officials, religious leaders and other residents attended a forum on International Women’s Day, called "Take Back the Warehouse," in reference to Take Back the Night marches.

WWJ’s extensive surveys of the Chicago-area industry found that about one quarter of warehouse workers are women; the Bureau of Labor Statistics reports similar numbers nationwide.

The report and forum are part of WWJ’s three-year-old campaign to improve conditions and accountability in the warehouses where consumer goods destined for stores around the country are staged for distribution.

The group has also recently launched a Warehouse Women’s Legal Defense Fund to subsidize legal action for women with sexual harassment or other gender-based complaints. In conjunction with the Working Hands Legal Clinic, WWJ recently helped Marshall and her mother, friend, uncle and mother’s boyfriend sue Partners Warehouse manager Brian Swaw, and people whom Swaw allegedly enlisted to intimidate and threaten the plaintiffs after they complained about his conduct. The lawsuit alleges Swaw repeatedly touched their breasts and buttocks, thrust his crotch in their faces and told Marshall’s then-17-year-old friend that when she turned 18 he would have sex with her.

The lawsuit also alleges Swaw also made frequent racial slurs toward Latinos, and suspended, and then fired, the plaintiffs after they complained. It also alleges he enlisted a former police officer (who was facing a federal indictment) and a private investigator to intimidate the plaintiffs and falsely charge them with theft, forgery and filing a false police report.

While that was an extreme situation, many other women told WWJ organizers that they deal with unequal pay, constant verbal and physical harassment and the threat of retaliation if they complain on a daily basis.

Elizabeth Labrador said after she complained about being paid $2 to $3 an hour less than men doing the same job at a warehouse for Petco, she was assigned to lift heavy fish tanks and ended up hurting her back.

Female workers report sexual harassment from both top managers and co-workers lower down the organizational hierarchy, so WWJ is trying to convince men they should be joining with their female co-workers to fight for better conditions rather than making their jobs even rougher. Fried told me:

A lot of men need to receive some education about what’s appropriate in the workplace. Because that’s not happening from the companies that employ them and operate the warehouse, because the industry is not doing their job, WWJ founded a women’s committee with one of the roles being to develop sexual harassment training for both women and men. The men have been incredibly supportive, it’s been eye-opening for them. They’ve found that absolutely this is an issue that affects women and also that it’s about making warehouses better for everybody.

Women quoted in the report describe constant patterns of humiliating and threatening behavior that left them exhausted and dreading their jobs. Dickerson, who worked at a Wal-Mart warehouse, said she was locked in a trailer and constantly derided by men asking things like "Did you chip a nail?" Latasha Davis described men gathering to watch women bend over to pick up boxes.

Samantha Rodriguez, a former Wal-Mart warehouse worker, is quoted in the report:

When I went to another supervisor about the harassment, he asked me out on a date. I said "no," and eventually I got fired. I pride myself on being an independent woman. I do remodeling, I hang drywall, I put in floors. That’s my profession. So I went to warehouses because I like doing that kind of work. Now, I won’t step foot in a warehouse. I refuse to. Because, the way they treated me wasn’t right.