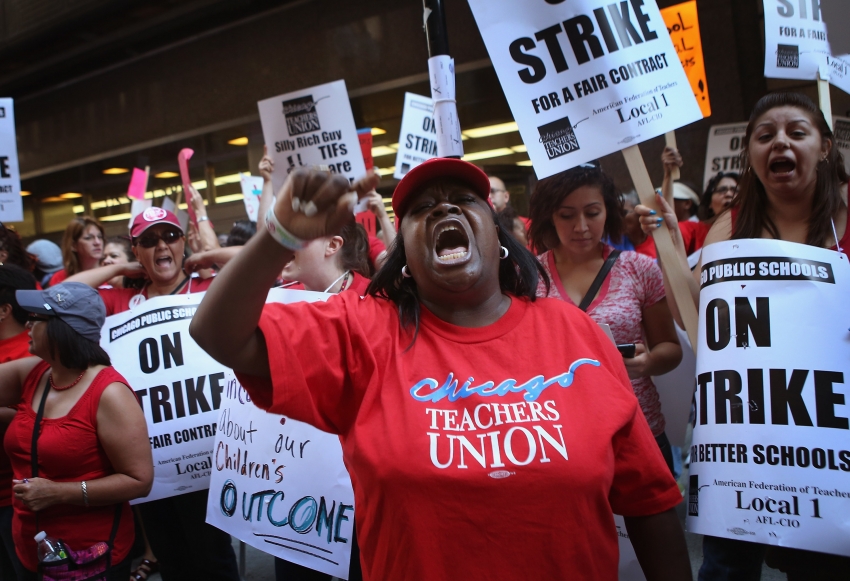 Teachers and supporters protest school closings outside the Chicago Public Schools HQ the night before a meeting of the Board of Education in February, 2011. (Photo courtesy of the Chicago Teachers Union)

CHICAGO—Like many teacher unions around the country, the Chicago Teachers Union has faced multi-faceted attacks in recent years. Republicans and conservatives have predictably supported these attempts to weaken the union and reduce workers' rights—often through legislation singling out the CTU. But the decisive initiative has come more from a strain of well-financed corporate backers of reform-focused on charter schools and from Democrats both in state government and the Mayor's office, especially the current mayor, Rahm Emanuel.

Now the union is negotiating a new contract that could easily lead to the first teachers strike in the city since 1987. Chicago Public Schools (CPS) is demanding drastic changes in the contract, many of them designed to implement and expand legislative and administrative changes that political leaders knew would conflict with the contract of the 25,000 teachers and support staff of the CTU.

For example, amidst protests from parents in varied neighborhoods, Emanuel decided to lengthen the school day from one of the shortest in the country to the longest (7.5 hours, but as a compromise with parental opponents, 7 hours for elementary students). But the mayor offered no plan for how schools would use the extra time or how the cash-short system could afford the expansion except by getting more work out of teachers without pay.

Emanuel and his superintendent, Jean-Claude Brizard, are pushing at least "five big changes all at once," says CTU vice-president Jesse Sharkey, "but none of the people pushing them has a good idea of how it will work. They're blowing up the system."

Despite school governance reform dating back to 1987, mayoral control since 1995, the closing and reconstitution of 100 schools, expansion of charter and magnet schools, widespread use of standardized testing, and other changes, Chicago's school system is a troubled, two-tiered system. It includes many of the best, highest-scoring schools in the state—many but not all designed, as Emanuel recently acknowledged obliquely, to keep middle-class and professionals, mainly white, from choosing the suburbs over the city. But drop-out rates remain high and scores low at many of the neighborhood schools serving the city's poor black and Latino neighborhoods.

Throughout these decades of varied reforms, however, the CTU has virtually never taken the lead in proposing effective reforms, has rarely cooperated even with reform groups not intrinsically anti-union, and has adopted a defensive approach that has lost the union public and political support.

The current CTU leaders—elected in 2010—have offered a reform plan of their own. "It's the first time I've heard of this union coming up with a plan so comprehensive and holistic," Sharkey  says. "One goal is to be seen as people who also care about good schools. But it's also because we're thinking about the contract talks in broad terms--what kind of schools we want."

The union's plan includes smaller class sizes (which education research shows is most valuable for poor, disadvantaged students); an enriched curriculum (40 percent of Chicago schools have no more than part-time instruction in either art or music, according to CTU); more counseling and support services; teacher mentoring, support and professional development; and reduced paperwork and standardized testing (potentially saving $100 million a year, not counting teacher time diverted to test preparation, the union estimates).

Although the contract expires June 30, negotiations started late last year, and under the new laws designed to make it harder for CTU to  strike, any strike would probably be illegal before August. In any case, the union's leverage increases when the school year starts.

CPS is proposing a 5-year contract with a 2-percent pay increase in the first year but also implementation of the roughly 20 percent longer school day. In the third year, CPS would eliminate all the pay increases linked to experience or education and switch to merit pay based on a new system of evaluation heavily dependent on student test performance. The administration also wants to prevent employees from accumulating unused sick days and to eliminate any contractual limits on class size.

For its part, the union wants much of its reform plan for enriched curriculum withnew staff, smaller classes, and more social work support. It wants a way to assure re-hiring of otherwise qualified teachers from schools that are closed for reorganization. And it wants substantial wage increases, estimated at 30 percent over a two-year contract.

"We see that work will be harder next year," Sharkey says. "We're asking for a pretty healthy raise."

Teachers and other union members, many demoralized by their scapegoating for school system problems, are already showing signs of militancy and solidarity, such as wearing red to school on designated days, Sharkey says. State law now requires a fact-finding review with an arbitrator that is now underway, followed by a cooling-off period if that produces no agreement. And the law requires 75 percent of teachers to vote approval before a strike can be called. From preliminary surveys, the union seems confident members are ready to strike if needed, and CTU president Karen Lewis has recently sounded more resigned to that necessity.

"I hope it doesn't come to that," Sharkey says. "I hope the district makes a reasonable proposal so this doesn't come down during the [fall] political campaign. But if it comes to a head weeks before the election, we're going to treat our contract, our members and the schools as the overriding concern. I know politicians will call and say, 'Don't mess up the election.' We'll say, 'Sorry, our timetable will not be driven by the election."