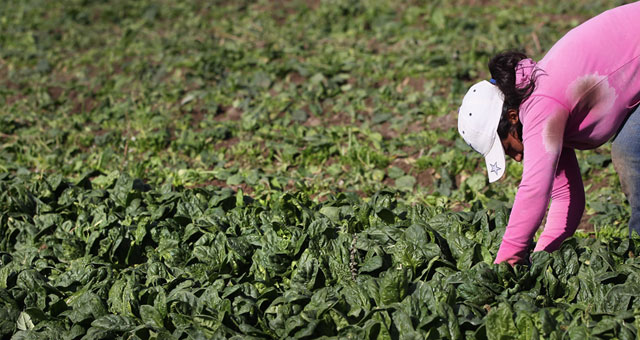 WASHINGTON, D.C.—For more than three years, the Obama administration cooperated with workplace safety advocates to develop guidelines forbidding children as young as 12 from taking on perilous farm jobs. Farmwork is risky business: agriculture incurs six times as many workplace deaths as other industries.

But in a slight to workplace safety advocates, last week the Obama Administration announced that it was withdrawing a set of proposed rules that would have regulated child farm labor. "The decision to withdraw this rule—including provisions to define the 'parental exemption'—was made in response to thousands of comments expressing concerns about the effect of the proposed rules on small family-owned farms. To be clear, this regulation will not be pursued for the duration of the Obama administration," read an official statement.

The anncouncement outraged workplace safety advocates. "Typically, I can find words to express my outrage. I can't even find the words on this one," says former OSHA official Celeste Monforton.

The rules were held up for nine months by the White House Office of Management and Budget (OMB), an unusually long delay. The administration finally released the rules for a public comment period after two 14-year-old girls working on a farm in Illinois were electrocuted last summer, as I reported last September. Proponents felt confident that once the rules passed through the OMB, they would be published. So it came as a shock when the administration not only placed the rules on hold, but declared that it would never consider them again.

The Obama camp's desicion follows an outburst of criticism from right-wing pundits and agricultural interests. Sarah Palin sums up the popular sentiment against the proposed rules, saying "If I wanted America to fail, I would ban kids from farm work."

Critics ignore that the rules explicitly exempted children who work informally on their families' farms. The rule also contained a “parental exemption” where children working under the supervision of their parents would have been permitted to keep working. Furthermore, the rule was in the public comment process and could have been altered to accomodate the needs of family farmers concerned with potential negative effects on their operations.

The hysteria over the proposed rules grew so strong that even Senator Al Franken (D-Minn.) had his staff pressure the Department of Labor to drop the matter. "I think this is a good outcome," Franken told Minnesota Public Radio. "They realized they needed to be working with farm groups and not doing it so much as regulations as a safety program because, as I said, no one cares more about their kids' safety."

“If folks knew the truth about this rule, we do feel that [they] would have been supportive of this stuff,” says Norma Flores Lopez of the Association of Farmworker Opportunity Programs. “These rules were common-sense rules that would have prevented children from getting hurt or possibly losing their lives. Abandoning [them] leaves a lot of children exposed and vulnerable."

For workplace safety advocates, the Obama administration's decision reflects a frightening trend that finds the president shirking workers' interests as he readies his campaign  for November's election. Another workplace safety proposal designed to limit workers' exposure to cancer-causing silica dust has been in limbo for 14 months.

“Obama is going to be officially launching his campaign in Virginia and Ohio next week, and I really believe that [dropping the child farm labor rules] has everything to do with the campaign and not science or public health," Monfronton says. "It would serve him and his campaign in rural America to say I told my labor department to withdraw this and never let it be pursued again in my administration.

"For me, it’s unconscionable on some levels. They identified these hazards and basically said kids don't need protection from any of them.”