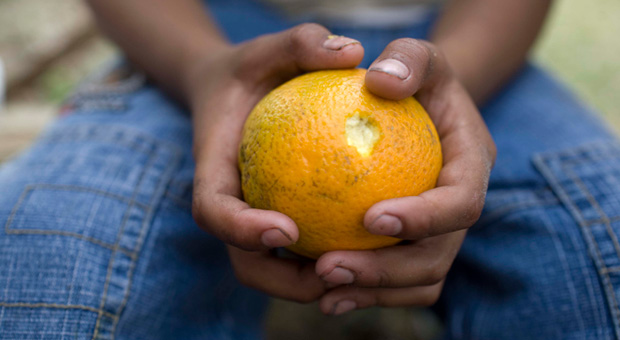 A young worker holds an orange in a migrant worker camp in Florida. (Photo courtesy of Human Rights Watch)

For a moment in Washington, it seemed like the White House was finally getting serious about reforming the agricultural labor system, with a common sense rule about preventing harm to child workers. But under pressure from the agribusiness lobby, the administration appears to have retreated from an initiative to tighten protection for childrens’ safety and health in agricultural jobs.

As we’ve reported previously, the move was seen by labor and child rights groups as a shameless pander to anti-regulatory forces in Washington. Activists have for years reported on the systematic exploitation of children on farms. Last year many hoped the Labor Department would finally respond to alarming injury and death rates by curbing the most hazardous forms of agricultural work for kids under 16, including restrictions on high-risk work in tobacco production, and limiting dangerous tasks involving certain farm equipment and animals.

Then advocates were distressed when the proposed reforms were held up under review by the White House Office of Management and Budget, the administration’s gatekeeper for regulatory proposals. The final affront came in April when the Labor Department announced that it was pulling the proposal in response to opposition from producers.

While the new rules would have explicitly exempted family farms, critics painted the measure as an assault on the rural way of life, glossing over the need to shield kids, many from migrant families, from the day-to-day brutality of industrial farm labor. The administration not only recycled these whitewashed arguments, but even scrubbed its own website of information explaining the proposal, according to the Pump Handle.

Actually, the migrant children in the fields today, facing severe poverty and limited educational opportunities, starkly represent how far modern industrial farming has drifted from the bygone bucolic ideal of the family farm.

The Obama administration’s cave on the child labor regulations show how deeply agribusiness has penetrated the Beltway; the opposition to the rule change was led by the corporate-dominated American Farm Bureau Federation, which praised the administration for reacting to “grassroots action.”

And we’re about to get another helping of Big Ag's political lard as Congress approaches the next big food fight: the farm bill. Although the mammoth legislation isn't focused on labor issues, it's central role in the country’s food system links it to the economics of food and farming, and by extension, to the vast workforce that keeps us fed through the bruised hands of countless migrants.

Yet in the legislative proposal outlined by the Senate Agricultural Committee in late April (just as the Labor Department withdrawing from child labor reforms), contains vague language on promoting American jobs, and yet virtually nothing on the core issues affecting farmworkers. Though a massive population of immigrants is threatened every day by abusive and unhealthy working conditions, the farm bill is premised on a labor system that keeps American appetites sated, profit margins fattened, and workers impoverished. Meanwhile, the roots of the current immigration crisis can be traced back to the federal farm subsidy system that has distorted global markets and displaced countless farmers in Mexico.

Advocates for sustainable agriculture have pushed for reforms that would make the food system more just, including curtailing the hyper-consolidation of the agricultural production chain. But it’s unlikely that immigration issues, or even labor issues related to migrants, will be comprehensively addressed this year.

Agribusiness lobbyists are, of course, push for a certain kind of immigration reform, namely an expansion of “guestworker” programs that keep labor flowing without offering a humane, sustainable structure for legalization. Nor is there meaningful discussion on strengthening labor protections and collective bargaining rights, though there have been intrepid grassroots efforts to organize these disenfranchised workers. The immigration reform debate is poised to be defined by growers who are frustrated with labor shortages produced by crackdowns of undocumented immigrants in states like Georgia and Alabama--and not from the migrant communities silenced and terrorized by those policies.

Child workers on farms are a bellwether of growing crisis. Sammy Almashat with Public Citizen’s Health Research Group told In These Times:

Low wages in the agricultural sector certainly contribute to the need for children to work alongside their parents. Most agricultural laborers in non-family farm establishments are poor and in many cases, undocumented migrant workers. The jobs are precarious for the most part. This contributes to an atmosphere where workers are afraid to bring up any abuses, whether wage or health-related, to authorities for fear of retaliation by their employers. ... If children’s health is seen as expendable in the eyes of the Obama administration, hazards facing adult workers will never see the light of day.

Child farmworker struggles are symptoms of a blight that’s buried by the spin of corporate agriculture: the politics of the food system are spoiled rotten.