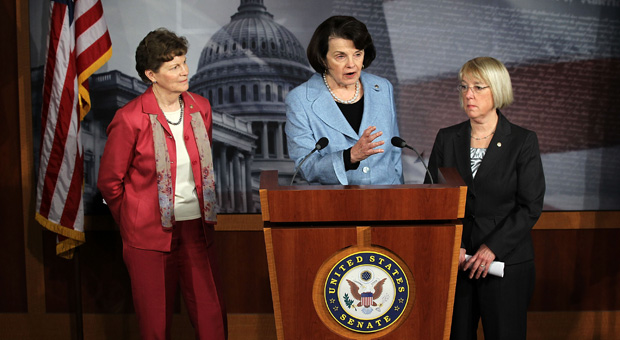 Women have been under economic assault in Washington for months. Deficit hawks have taken aim at social programs and civil rights protections that help keep women safe, healthy and able to participate in work and community life. To some lawmakers, none of that is more important than “saving” taxpayer dollars—which is often shorthand for robbing working women of both their earnings and their safety net.

The hostility toward women crested this week as conservative lawmakers pushed legislation that would gut the Violence Against Women Act (VAWA). House Bill 4970 isn't just oppressive to survivors; it attacks the civil and social rights of all women. By raising barriers to economic assistance and legal recourse, the legislation sends the message to countless women living in violent households that their place is still in the home.

Even with protective laws on the books, a woman struggling to support a family and avoid foreclosure faces a devastating choice when the alternative to an abusive home is homelessness. The decision to break away is even harder when local service programs and battered women’s shelters are themselves struggling for survival amid budget cuts.

Adding insult to injury, many states have failed to protect survivors’ access to unemployment insurance, which aggravates the economic instability that often keeps vulnerable women tied to abusive partners.

The House version of VAWA would deal a blow to immigrants trapped in abusive relationships, making it harder to petition for legal status as abuse victims, and easier for abusers to terrorize partners who fear immigration authorities. Lisalyn Jacobs of the advocacy group Legal Momentum told In These Times that “immigrant women are particularly economically vulnerable and may either be relying on their abusive partner's income, or in a marginal position themselves that prevents them from being economically stable enough to leave their violent partners.” The bill also erodes mandates for public housing authorities to develop policies to help abused residents relocate to safer places.

The House bill comes at a time when the country’s economic crisis has taken an especially cruel toll on abuse victims. Although economic troubles don’t directly cause domestic violence, combined with anger and self-blame, can unemployment, poverty and other social stressors can definitely excerbate family conflicts and make escape prohibitively expensive.

The economics of intimate partner violence shape the impacts of abuse as well. According to a 2007 analysis by the National Coalition Against Domestic Violence:

A 2009 study published by the National Resource Center on Domestic Violence noted that compared with other women, "women who report [domestic violence] victimization also report more days arriving late to work, more absenteeism from work, more psychological and physical health problems that may reduce their productivity, and greater difficulty maintaining employment over time.” In the perverse cycle of economic oppression and violence, some abusers capitalize on women's financial dependency by harassing their partners to interfere with their jobs, or simply stealing money from them.

Efforts to claw back protections for survivors are the tip of a widening spectrum of policies promoting gender inequality, including welfare regulations that punish single mothers, budgetary attacks on reproductive health care for the working poor, and now, abandonment of the state’s basic responsibility to protect women from physical and economic abuse.

Advocates have supported the Senate version of the VAWA bill, which contains the progressive provisions absent in the House legislation. But overall, funding for related programs and services has been precarious year to year. Jacobs said, “neither bill contains the strong response to the economic needs of survivors of violence that would be appropriate given the fragile state of the economy.”

The brutalization of women doesn’t go on just behind closed doors. On the House floor, the nation’s shame is now on full display.