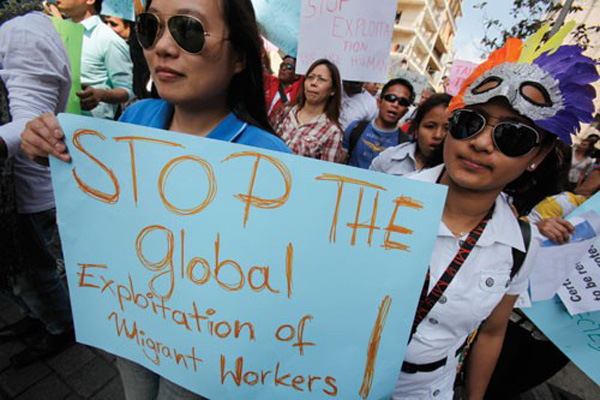 The United States isn't unique when it comes to political and social crises related to immigration. Migrants in other parts of the world face similar, sometimes much harsher struggles. Even those who are "legal" are often extremely vulnerable to economic exploitation, racial discrimination, and physical and sexual abuse. Abuse and enslavement of migrant and domestic workers from Asia and Africa has become epidemic in the Middle East.  In the wake of the suicide of an abused Ethiopian worker, Alem Dechasa-Desisa, whose story helped galvanize migrant rights campaigns, the issue has moved into the media spotlight lately:

Stories of migrants dying on the job or taking their own lives are not uncommon, underscoring how their lives can be undervalued once they're swept into a "disposable" household workforce. Migrant women in particular struggle often with abusive employers and sexual harassment.

This video is part of a grassroots anti-harassment media campaign led by women in Lebanon:

Some migrant women are organizing and documenting their struggles in their own voices. One Ethiopian domestic worker-turned-filmmaker, Rahel Zegeye, has created a feature film, Beirut, which narrates the wrenching struggles of migrant women in Lebanon. In an interview with Tadias, Zegeye describes a plight that may sound familiar to domestic workers in the United States:

TADIAS: What are the biggest problems that Ethiopian domestic-workers face with their employers?

RZ: There are many. Most common issues include bad treatment, abuse from employers, no rest and no day off. It is also very common that the maids are not paid on time or at all, and that the employers limit their food or let them stay without food. Many employers are very racist and do not treat their workers with respect, dignity or humanity. Sexual harassment and abuse by employers also occurs. For example I know three girls who were made pregnant by their mister and were threatened not to tell their madam, and had to leave the house to go to the hospital to make an abortion.

TADIAS: How true are some of the horror stories we hear and read about in the media? And what can women do to protect themselves from such violence?

RZ: The horror stories are real and they occur. There are many more horror stories that are not reported and written about. There is very little protection for the women coming to work in Lebanon. She can try to communicate with her employer but many times there will be language problems and if the employer is abusive then there is little chance they will listen to her. She can ask them to let her go to the embassy and to return home. If she returns to the agency that brought her here they will not help her, just change employers, which may be for the better or for the worse. If she runs away from her employers she will not have her passport and papers and cannot go back to Ethiopia.

On the eve of May Day 2012, many migrant workers from Sri Lanka, Nepal, Sudan and other countries came out from behind closed doors and took to the streets to rally for fair treatment. As with many "guestworkers" in the U.S., one of the critical policy issues tied to the systemic abuse of migrants is the structure of labor sponsorship. As legal guarantors, employers can basically impose legal shackles on workers to make it all but impossible to leave or challenge abuse.

Domestic workers across the United States, many of them women escaping hardship in their home countries in Latin America, Africa and Asia, also suffer from poverty, harsh conditions and sexual abuse. And they've also used grassroots organizing and media to bring to public light to the injustices they suffer day-to-day on the job.

The Caring Across Generations Campaign—an initiative for home health care workers led by National Domestic Workers Alliance—has shown that here, too, giving workers a media platform to tell their own stories is crucial for educating and mobilizing the public.

Last summer, the National Domestic Workers Alliance, together with migrant workers' groups from around the world, pushed through the groundbreaking International Labour Organisation Convention for Domestic Workers. The accord codifies basic labor rights for domestic workers, including the right to organize, and sets standards for the treatment of workers in households, like a mandate for a genuine employment contract and immigration relief for victims of abuse.

But the challenge facing globalized concepts of labor rights is that they're eclipsed by the laws of nation states. Despite campaigns for pro-migrant labor protections on the local and national level, like the Domestic Workers Bill of Rights initiative, the absence of strong international standards makes workers everywhere more vulnerable. While multinationals assert corporate sovereignty over national systems, workers see their rights shredded by the sharp borders they've traversed.

The irony of the global economy is that the suffering comes from the two extremes of economic mobility. The workers who are stuck in Rust Belt towns, while behemoth manufacturing companies ship job overseas, find their communities devastated by "capital flight." Meanwhile, wealthy communities absorb droves of migrants who chase the fleeting promise of higher-paying jobs—only to become ensnared in a marginal underclass. Until the workers abandoned by capital, and those held hostage by it in a foreign land—realize that their plights are interlocked, labor remains fractured across divides of language, race and politics.

Still, domestic worker campaigns show that global communications can counter global exploitation. Creative protest through film and media are forming a common language for a dialogue on migrants' rights, breaking their silence with one collective voice.