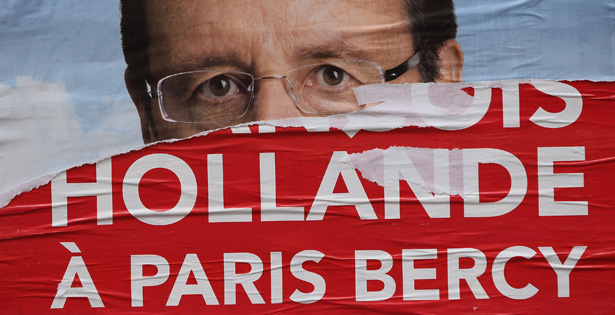 PARIS, FRANCE—Many French trade unionists rejoiced over the defeat of the former conservative President Nicolas Sarkozy by Socialist candidate Francois Hollande earlier this month. Under Sarkozy, public sectors unions were hit with increased privatization of public services and the denial of a cost-of-living adjustment. Sarkozy also vilified labor unions, blaming them for many of the country’s economic woes and the decline of France’s education system.

"In electing Hollande yesterday, the electors chose a presidential candidate who during the campaign had a strong discourse on the necessity of bringing together all French people, whatever their cultural or social origins,” read a statement released shortly after the election by the French Democratic Confederation of Labour (CFDT), France’s largest trade union federation. “He's also the candidate who clearly announced his desire to create a dialogue with social partners, notably organized labor... . The CFDT hopes to take part in this approach.”

French trade unionists now find themselves in a position similar to that of American trade unionists when Obama was elected four years ago—hopeful for change, but skeptical at the same time. In the midst of economic recession, French trade unionists are excited about Hollande’s pledge to lower the retirement age back to 60, tax the rich, and put penalties on profitable companies that lay off workers. Hollande also vowed to renegotiate austerity pledges made by France under Sarkozy.

Some public sector workers in France are worried, though, that Hollande will come after them in an attempt to reduce deficits. Last week, Hollande met with German Chancellor Angela Merkel, who is pushing austerity in Europe, and agreed to find a common approach to control debt and encourage growth—a move some interpreted as a sign that Hollande would be embracing the "austerity lite" program that countries across Europe have adopted in response to the debt crisis.

“Hollande is a pro-capital and pro-Europe guy. Therefore he will implement the policy of Brussels, which means more attacks on the public sector and on the social system,” says Jean-Pierre Page, the former international affairs director for the General Confederation of Labour (CGT), France’s second largest trade union federation. “There is no difference [between Hollande and Sarkozy] except on the appearance.”

Workers at Hopital Cochin, an large hospital in Paris, are skeptical that Hollande will do anything to help them. The hospital's employees have seen working conditions deteriorate sharply under Sarkozy as a result of understaffing and increasing privatization of jobs within the hospital. Programs that once allowed low-skilled workers to train for free for more skilled jobs within the hospital have been eliminated, and workers complain that their wages have remained stagnant, even as the cost of living has increased in France.

“Hollande would stop Sarkozy’s attack on public workers, but he wouldn’t improve things. He hasn’t promised anything on wages,” says Marise Dantin, a hospital worker and member of CGT. “He is not really a friend.”

Workers here see similarities between Hollande and President Obama. While Obama has in very cautious terms defended the right of public employees to collectively bargain, he has also endorsed the mass firing of unionized teachers in Rhode Island, and cut pensions and implemented a pay freeze for federal workers. Fearing that Hollande may engage in similar behavior and that he will allow privatization to move forward and do little to raise the wages of public sector workers, many hospital workers feel they must be more militant than American workers were in pushing back against Obama.

“We are going to take the streets,” says hospital worker and CGT member Bernard Guisti. “If we don’t fight, we will arrive at the same place as workers in the U.S.”