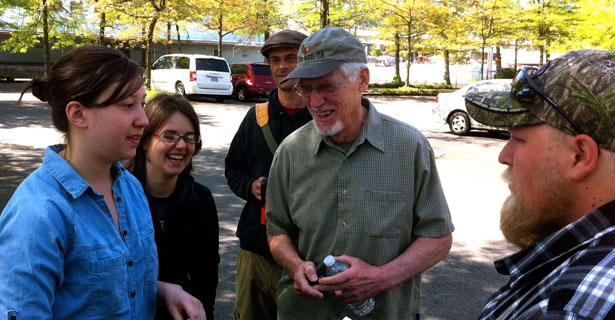 In Oregon's May 15 primary, progressive challenger Jeff Reardon scored a two-to-one victory over Mike Schaufler, a five-term Oregon Assembly Democrat who appeared safe just months before his defeat. Reardon’s victory relied on support from the labor-backed Working Families Party, in coalition with environmentalists, MoveOn, and unions—though the state AFL-CIO, and some of its affiliates, stuck with the incumbent.

The Working Families Party, a progressive, labor-backed third party, hails Reardon's victory as a national model. “Winning a race like this,” says WFP State Director Steve Hughes, “in the face of someone that’s funded by the lobbyists as he was, sends a message that we can hold these people accountable.”

Following this month’s election, The Oregonian declared Reardon’s victory to be the WFP’s “coming out.” Reporter Jeff Mapes wrote that the party hadn’t previously had “a big impact here,” but it “essentially ran Reardon’s canvassing operation.”

For the Oregon WFP, Schaufler represented both an obstacle and an opportunity. Schaufler had repeatedly sided with the GOP on key votes, including opposing banking regulations, environmental protections, and the establishment of a state health insurance exchange. The partisan split in the legislature—30 Democrats and 30 Republicans—heightened the impact of those defections. Hughes charges that Schaufler was also “the guy that sits in the [Democratic] caucus meeting, and then goes out and tells the corporate lobbyists what the plans are.”

Meanwhile, Hughes says the Oregon WFP had been looking for an opportunity “to participate in a very meaningful way in a race, as a way to demonstrate the basic theory of exerting independent political power within the electoral realm…This race was an obvious choice.”

The WFP began in 1998 in New York State, where the law allows “fusion voting”—in a general election, a candidate can appear on the ballot as the nominee of multiple parties. The opportunity to place deserving Democrats, pro-union Republicans, or its own candidates on its ballot line helped WFP translate its membership base and mobilization machine into legislative leverage. In the mid-2000s, WFP began looking beyond New York, including a wave of mostly unsuccessful efforts to legalize fusion voting in new states. Today, the WFP is active in five states. That includes Connecticut, where the votes Democrat Dan Malloy earned on the WFP line exceeded his victory margins in the 2010 Governor’s race, and Oregon, where the party won “fusion voting” in 2009.

As in other states, many of the WFP’s leaders have labor ties. Jeff Anderson, who serves as secretary-treasurer of United Food and Commercial Workers (UFCW) Local 555 and as co-chair of the Oregon WFP, says unions provide “the vast majority” of the state party’s funding. Local 555 is the largest private sector union local in the state.

In a February interview with The Oregonian, Schaufler defended himself as a “pro-worker, pro-choice, pro-gay rights Democrat.” In March, he called himself “the labor candidate in this race.”

Schaufler had benefited from the backing of unions—including Anderson’s—throughout his ten years in office. The Oregon AFL-CIO endorsed him in March, at a point when, according to Hughes, “the general sense was that even though he was bad, he was not beatable.” Schaufler drew other labor endorsements, including the state Building Trades Council. “When it comes to the construction and building trades issues, I believe he’s 100%,” says Anderson. “And so it’s real easy for the establishment to stay with the status quo, especially when it’s a ten-year incumbent.”

The Oregon AFL-CIO did not respond to a request for comment. In an April 5 statement e-mailed to Willamette Week, an spokesperson said, "Representative S[c]haufler's entire history—including his voting record, when and how he supports union members outside of the Legislature, his behavior at our convention, and the public statements he has made and private conversations he has had since then—were taken into account when our board chose to endorse his campaign for re-election. Ultimately, over 2/3 of our board has to agree that a decision is best and in this case they decided that we should support Representative S[c]haufler's reelection."

UFCW Local 555 and Operating Engineers Local 701 both endorsed Reardon on March 23, two days after the WFP. Others followed. Anderson says that while the odds looked steep early on, it turned out that some unions had just been “looking for somebody to make the first move.”

Anderson adds that others, especially in the public sector, expressed concern that if Schaufler survived, he would retaliate against unions that had endorsed his opponent: “The term that was used is, if you poke the bear, you better kill it.” Nonetheless, the state's District Council of the American Federation of State County and Municipal Employees (AFSCME) endorsed Reardon in late April.

Schaufler did himself no favors when he accepted a check from Koch Industries, a company of the famously anti-union Koch brothers. When the donation first became public April 25, Schaufler said he saw it as a contribution from Koch subsidiary Georgia-Pacific, a paper company. “These are the people who create jobs…” he told The Oregonian. Within 24 hours, after a media blitz and petition from WFP and allies, Schaufler had announced he was returning the contribution. While that was a “turning point,” says Hughes, “had we not done all the ground work and building of a campaign, he could have accepted that 3,000 dollar contribution and the benefit would have been greater than the detriment.”

Hughes says union support “was pretty instrumental in the victory.” Within six weeks paid and volunteer pro-Reardon canvassers made 5,000 voter contacts. On election day, Reardon won with 66% of the roughly 4,000 votes cast.

Hughes adds that union support also had particular significance because Schaufler “was trying to set up a debate that has a lot of emotional resonance in this region, for all the wrong reasons, of he’s the jobs candidate and the other guy is the environmental candidate.”

Other factors also contributed to Schaufler's vulnerability, including redistricting into a district that included a majority of new constituents, and allegations that he had groped a woman during an AFL-CIO convention last October (Schaufler denied the charge).

WFP leaders say to expect more victories like Reardon's in the future. “There’s also a discussion with many more states with community-based organizations and unions and various folks,” says Hughes, “coming to the conclusion at this particular moment that we’re in, that it is not enough to simply back Democrats and hope for the best, or just be good foot soldiers in going after Republicans.”

In Oregon—as in the country—primary rebellions from the party base have been more common among Republicans than Democrats. After the 2004 Republican primary defeat of Representative Vic Backlund, says Anderson, conservative activists would “go around and tell Republicans, if they don’t get in line with the right-wing agenda, that they would ‘Backlund’ them. So what you might say is that we just did a similar thing.”