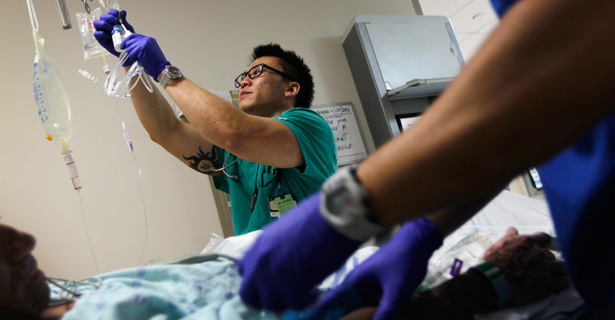 Registered Nurse Tung Tran hangs an I.V. bag for a patient at the University of Miami Hospital's Emergency Department on April 30, 2012 in Miami, Fla. (Photo by Joe Raedle/Getty Images)

It's a universal health care frustration: the emergency room. Endless waits and doctors who treat patients like products on an assembly line. A new study confirms the exasperation: A large portion of patients believe they’re being treated poorly by an overstretched system.

According to the survey, conducted by National Public Radio, the Robert Wood Johnson Foundation and the Harvard School of Public Health, about one in every three patients, who spent at least one night in a hospital in the past year, reported that “nurses weren't available when needed or didn't respond quickly to requests for help." Though only a minority reported being dissatisfied overall, many respondents felt the hospital’s traditional frontline staff hadn’t given them adequate attention.

But what’s behind the numbers? In NPR’s informal follow-up Facebook poll, nurses sounded every bit as vexed as the patients:

We received hundreds of responses and read them all: piles of stories about nurses feeling overworked, getting no breaks, no lunches and barely enough time to go to the bathroom. Even worse, many nurses say breaks and lunchtimes are figured into their salaries and deducted, whether they take them or not.

Many nurses were reluctant to speak on the record, amid fears of their bosses’ reaction. One nurse reflected the sense of tension and helplessness at work:

"We're always afraid that something will happen to our patients during the time we're off the floor," one nurse says, "and I personally don't feel comfortable leaving them unless I know that a co-worker is actually looking after them during the time that I'm off the floor."

This nurse says she rarely stops. Not for 12 hours. She's an emergency room nurse in a busy urban hospital. The ideal, she says, would be one nurse for every three patients in her ER. But she typically cares for five patients or more — often eight, if she's covering for a colleague taking a lunch break. She says there are times when she can't leave patients' bedsides.

"Maybe I was injecting medication that you have to push slowly over five to 10 minutes so it doesn't harm them," she says, "and I can see the call bell going off in the hallway, and there's no way I could respond to that."

The only option is to literally yell down the hallway and hope another nurse hears her and responds to the patient call bell. There have been times when she has driven home at the end of her 12-hour shift, white-knuckling the steering wheel and wondering whether she "missed something."

The whole system seems to be “missing something” when it reaps massive profits but can’t keep hospitals properly staffed. Actually, the nurses themselves have some pretty good advice on how alleviate this problem—if only more politicians would heed it. The National Nurses Union and California Nurses Association (CNA), a founding affiliate, have called for RN-to-Patient staffing ratios, which would help ensure a set number of qualified nurses proportionate to the patient population. There's been much debate over the cost and impacts of such a mandate, but the potential benefits were affirmed by a 2010 study analyzing the results of a landmark law in California that sets mandatory RN-to-patient ratios.

The study, which compared California with other states, showed a link between staffing ratio rules and better outcomes for both patients and nurses, and even lives saved:

So what’s stopping hospitals from following California’s lead? In the NPR story, the American Hospital Association argues that “hospitals are facing big financial challenges” amid the growing needs of patients and increasingly complex treatments and medical advances.

But the crisis can't be explained simply by an overall “shortage” of nurses. The real cause of the staffing squeeze might be the tight fists of hospital CEOs, who don’t want to invest in maintaining an adequate, qualified workforce. CNA representative Chuck Idelson told In These Times, “The problems are systemic, primarily because the focus of the corporate giants that control most hospitals now is on profits, not on safe patient care.”

The perverse incentives afflict every level of the health system. One nurse told NPR about feeling overwhelmed on the job and lamented, "these are human beings... not products on conveyor belts." The system that dehumanizes patients expects nurses to work like machines.

Beyond the hospital walls, nurse advocates have tied patient-care issues to gaps in social equity, agitating for a living wage and a just tax code. Idelson said a single-payer health care system would be the ultimate fix: “That way, you take away much of the profit incentive in health care, which is the key barrier to safer patient care.”

The movement for truly universal health care remains plagued by political stagnation. But for now, National Nurses United is pushing for federal legislation to establish nationwide nurse-ratio guidelines in acute-care facilities, and to strengthen training programs to build the nursing workforce. It’s not a cure-all, but the initiative would compel hospitals to treat workers and patients more like real people, not units of profit.