This is What Plutocracy Looks Like: Walker Rides Huge Funding Edge to Victory 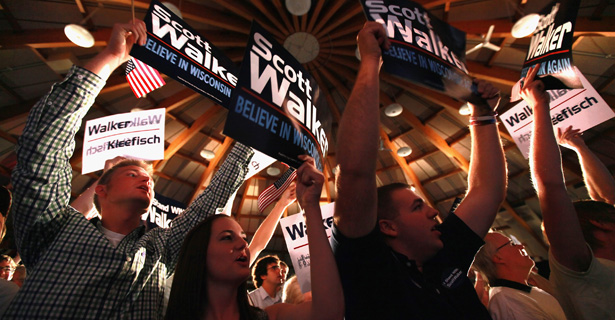 Supporters of Gov. Scott Walker cheer as they watch returns at an election-night rally June 5, 2012 in Waukesha, Wis. (Photo by Scott Olson/Getty Images)

On Tuesday night, with Gov. Scott Walker’s re-election in a special recall vote, Wisconsin learned a brutal lesson: “This is what plutocracy looks like.”

Thousands of union members and other Wisconsinites have been fighting for the last 16 months when Walker, in his own words, decided to "drop the bomb” and cripple the operations of almost all public employee unions by introducing Act 10. This triggered a massive upsurge by labor and its allies to restore worker rights, strengthen plundered public institutions like education and healthcare, and to revitalize democracy. Activists gathered over 1 million signatures on petitions to trigger the recall vote during the coldest days of last winter.

But their vision of a new progressive era for Wisconsin has been turned upside down—at least temporarily—by a tidal wave of money from billionaire CEOs and corporations that swept Walker to victory.

So what accounted for Walker’s large 53 to 47 percent victory?

Walker raised $31 million as of his most recent filing, giving him an advantage of about 9-1 over his Democratic opponent, Milwaukee Mayor Tom Barrett.

The flood of money effectively negated massive grassroots organizing efforts conducted in Milwaukee, Madison, and Racine. The labor coalition We Are Wisconsin, Citizen Action of Wisconsin, Wisconsin Jobs Coalition, Organizing for America, and African-American clergy, assisted by the Rev. Jesse Jackson (see video), among others, were enormously effective in driving up the turnout. The work in Racine helped to unseat one of four Republican state senators targeted for recall, giving the Democrats control of the state Senate.

However, the intensive face-to-face organizing drives in these cities were more than offset in the rest of the state by the impact of a huge TV advertising campaign by Walker that has been going on for the past six months.

“We did everything we needed to do in Milwaukee and Madison, where we had the intensity of effort and the density of unions and other organizations, “ said Milwaukee County Democratic chair Sachin Chheda. “But we were out-spent 9 to 1 across the state, and all the ads had an impact.“

Union households comprised 33 percent of the electorate, compared with just 26 percent in 2010. But Walker managed to capture the same one-third of those households, just as he did two years earlier. Unions have initiated an effort to persuade their members that Walker is fueling a push to make Wisconsin an anti-union “right-to-work” state (see here and here) law, but clearly this awareness has not fully taken hold. Walker’s infamous "divide and conquer" strategy appears to be working.

While labor and African-American leaders worked extraordinarily hard to turn out their base, the Republicans once again produced very high levels of turnout. Along with the steady carpet-bombing of TV ads, Walker devoted 42 percent of his election expenditures to direct-mail operations that have clearly proven effective in mobilizing the Republican base. Walker’s vote total surpassed his 2010 election by about 200,000 votes.

To the extent that the issue of money in politics was raised, major media shamelessly created an absurd equivalency between the tens of millions raked in by Walker from out-of-state billionaires and millionaires and the minor sums collected by Barrett. In a front-page story, the Wisconsin State Journal preposterously proclaimed, in a page one headline, "despite rhetoric, the parties' mountains of money are about even.” Similarly, the Milwaukee Journal Sentinel headlined a story, "Barrett, Walker have one thing in common: Out-of-state donors,” glossing over the fact that Walker raised 67 percent of his far larger war chest from out-of-state sources, compared with Barrett generating 34 percent from non-Wisconsin sources.

The major media similarly swallowed whole Walker’s contrived budget crisis, which he used to justify his attack on public-employee rights, largely failing to note the hypocrisy of Walker’s alarm at a $137 million budget shortfall while handing out a nearly equal sum in future tax breaks to corporations and the rich.

Even when Walker’s legislative allies violated the state’s "open meetings" law to ram through Act 10 by suddenly reversing course and claiming that Act 10 was no longer a budgetary item, little media attention was devoted to this flagrant breach of both Wisconsin law and legislative protocol.

Nor did the Wisconsin media devote much scrutiny to Walker’s boast that he considered bringing in “troublemakers” to disrupt the peaceful protests. In general, with notable exceptions like the Capital Times and the weekly alternative paper Isthmus, the state’s major media studiously avoided the big questions about Walker. They have stayed away from the Walker regime's disastrous breaking of contracts with the Talgo train company that was ready to build a mass-transit line between Milwaukee and Madison, the implications of the John Doe probe where Walker has spent $160,000 on legal counsel, his false testimony (see here) and his bestowal of $2.3 billion in tax breaks on corporations and the wealthy over the next decade, a strategy that has failed to buy the loyalty of the fortunate few when it comes to investment and job creation.

Right Side of History

While Tuesday night was a painful experience for Wisconsin progressives, it is clear that some dynamic progressive leaders will keep inspring the battle for workers rights and economic democracy in the spirit of the state's legendary “Fighting Bob LaFollette.”

State Firefighters President Mahlon Mitchell, who ran as the Democrats candidate for lieutenant governor, ignited a dispirited throng Tuesday night in Milwaukee when he declared, “This is a fight we have to keep up. This is not just a movement, but a way of life. I am not done with this fight. We gotta keep together and keep going."