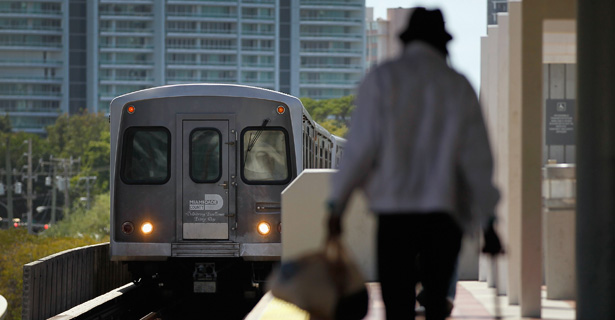 A recent report by the Refund Transit Coalition, a collection of community groups, unions, and disability advocates, showed that transit agencies in 12 different major cities are paying a total of $529 million in interest rate swaps to Wall Street banks. The transit agencies are forced to pay these exuberant fees despite the fact that transit agency revenues have decreased while the cost to banks to maintain these interest rate swaps has plummeted. In order to continue paying these fees and to meet other revenue shortfalls, 80 percent of transit agencies have had to either slash services or raise fares, according to the report ("Riding the Gravy Train").

“These cuts impact seniors, students, and people in low income communities who use the public transit. We have seen a lot of our members' bus drivers laid off because of these kinds of deals,” says Amalgamated Transit Union Communications Director Dave Roscow. ”The banks are making money on the backs of riders to the tune of $500 million a year. It doesn’t make sense we as riders bail out these banks. It’s time for these banks to renegotiate these interest rate swaps."

Fast forward almost 10 years, after many of these transit agencies had signed these deals: In an effort to make it cheaper for big banks to borrow money and increase their profit, the Federal Reserve cut interest rates to zero. According to the report, taxpayers in many comments are “typically stuck paying 3 percent to 6 percent” while the banks are only paying about 0.5 percent.

In Boston, where 39 percent of people using the transit system don’t have a car, the Massachusetts Bay Transportation Area (MBTA)—known as the T—has a $160 million dollar deficit in FY2013. According to the Fare and Service Charge Information Booklet, the MBTA has the “highest debt burden of any U.S. transit agency” in the country. The report states that “every dollar the T collects in fares goes to pay down the debt." The T has responded to its growing debt by increasing fares on rides by 23 percent and, most shockingly, increasing fares on disabled passengers by 150 percent.

The report states that 250,000 less trips will be taken on the T by people with disabilities because of the cuts. Meanwhile, the city continues to pay $26 million a year in interest rate swap fees to three major banks—Deutsche Bank, JPMorgan Chase, and UBS—and over the next 20 years will have to pay these three banks an additional $254 million in swap fees.

“Only 21 percent of people with disabilities are employed and of those that are employed the average income is about $20,000. Most disabled people are living on fixed incomes,” says Jeremy Thompson , a member of the Refund Transit Coalition. “These are the folks that are going to be forced off the T. Meanwhile, the T is sending $26 million a year Deutsche Bank, JPMorgan Chase, and UBS."

The coalition is also calling on municipalities to investigate whether any fraud was committed in signing these deals and threaten to sue the banks if they do not renegotiate the deals. Currently, the City of Baltimore is suing several banks over its interest rate swaps, claiming that the banks colluded to manipulate the LIBOR interest downward that sets how much Baltimore has to pay for its loans.

“We are stuck in these pre-bailout deals in a post-bailout interest rate environment. We know banks renegotiate deals with each other all the time when it benefits them. They need to renegotiate with us," says Saqib Bhatti of the Leadership Center for Common Good. “We bailed the banks out and the only reason they are making this money is because they are profiting off their bailout. We need to do what we can as the public to make them do the right thing.”

The coalition of transit bus drivers, riders, and disability advocates hope that by raising a ruckus over these opaque, little-known interest rate swaps, they can prevent service cuts and transit fare increases.

“The more we put pressure on the banks, the more people hear about it, and the more people will start taking action on it,” says Alia Phelps, whose family has been negatively affected by bus cuts in Oakland. “We want a bus system that works for you. We need to ask our government—whose side are you on, the banks or the side of the riders?”