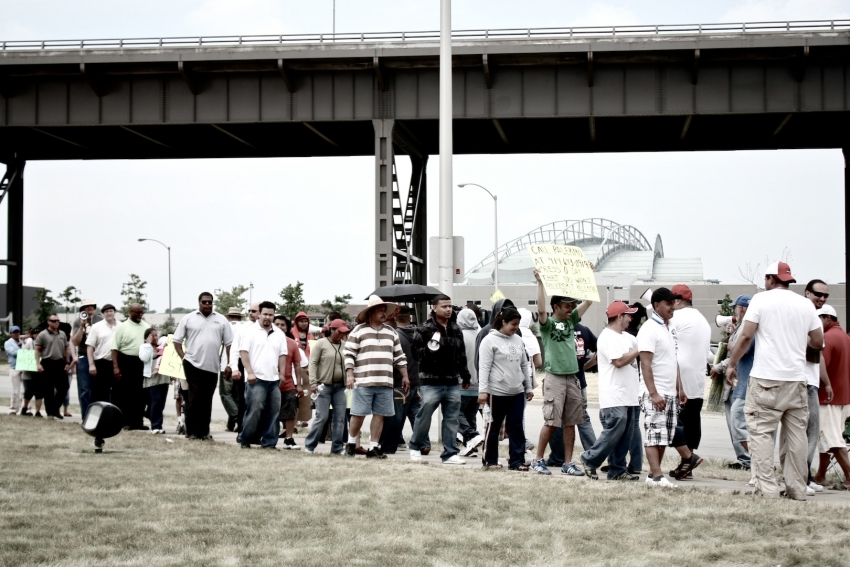 MILWAUKEE – Workers at Palermo’s Pizza have been on strike for two weeks. They say they chose to strike after Palermo’s met their efforts to form a union with threats and retaliation, including the use of immigration enforcement as a weapon. Slogans include “No Justice, No Piece.” On Monday, the National Labor Relations Board (NLRB) set a union election for July 6.

“We want Palermo’s to treat us as a person,” striker Orlando Sosa said as he picketed Palermo’s Milwaukee factory.

In interviews last week – some on a picket line, others following a Get Out the Vote Rally led by Jesse Jackson – Palermo’s workers said the strike was caused by years of abusive work conditions and weeks of anti-union intimidation.

“From my point of view, there’s been a lot of exploitation,” says Roberto Silva (he and other Palermo’s workers were interviewed in a mix of English and Spanish). He described being forced to work 70 to 80 hours a week, even while sick, and being threatened with job abandonment when he asked for a break. “You have to work until you can’t,” says Silva.

Jose Ramirez sums up his life as “Just eat, sleep, and work.” In a video posted on the website The Uptake, a worker described being told he had to work the day after he was sent to the emergency room because his fingernail was ripped off by a machine. For years, says Alicia Garcia, workers would blame individual abusive managers, and every time one left, “We would say the next would be better.” Now, she says, they blame Palermo’s itself.

Palermo’s employs nearly 300 workers, and its frozen pizzas are sold by major chains, under multiple labels, across the United States. The company did not respond to a request for comment, but Director of Marketing Chris Dresselhuys told the Milwaukee Journal Sentinel that “The allegations that have been leveled against Palermo’s are categorically false.” Dresselhuys said that immigration enforcement was unrelated to unionization, that some workers had “abandoned their position” by striking, and that if workers win the union election, “we will work it out.”

“Most of those workers are our members," says Voces Executive Director Christine Neumann-Ortiz. “We definitely have their back.”

Last November, some Palermo’s workers decided it was time to form a union. “We just wanted a voice,” says Silva. “Simply that they listen.”

A month later, workers presented management with a petition addressing issues with safety and discrimination. In April, workers and Voces staff met with staff from the AFL-CIO and the United Steelworkers. (Full disclosure: the USW is an In These Times sponsor.)

Palermo’s workers say they were also inspired by the past year’s uprising at Wisconsin’s Capitol in Madison. “I hadn’t seen that in years,” says Daniel Camano.  “Every single advertisement you see for how other people are fighting for the same reason,” says Sosa, “that inspires you to do the same, to work for your rights … That helped us a lot.”

In a letter to the NLRB, union attorney Richard Saks noted that by last month, Palermo’s was engaged in an anti-union campaign: an anti-union poster went up, a manager told a worker not to talk about working conditions, Palermo’s hired notorious anti-union firm Jackson Lewis, and workers heard that the company would require immigration authorization verification of its employees.

On Sunday, May 27, workers decided to formally sign their co-workers up to form a union. Two days later, they submitted signatures to management and asked the company to immediately recognize the union (“majority sign-up”). The company refused. The same day, Palermo’s instructed employees to begin training replacement workers from a temp agency, and gave employees a letter stating that they had 28 days to verify their authorization to be working in the United States. Some workers went on strike that day.

“The company is retaliating,” says Daniel Camano, “using ICE [Immigration and Customs Enforcement] to be able to get rid of all of us that have the most years at the company.” Camano, an employee for nine years, says he was targeted and fired over alleged immigration issues. “This is motivating us to get more involved in the union.”

“The company has used the issue of an ICE audit and the process involved in that as a means to bust the union organizing drive,” says Neumann-Ortiz, “in addition to other forms of retaliation.”

On May 30, workers filed a petition with the NLRB seeking an election to form an independent (unaffiliated) union. According to Voces, a work stoppage the previous day won a three-day hiatus on the hiring of new replacements. But in a meeting with some workers, Voces staff, politicians and clergy, Palermo’s announced that workers would have 10 days, rather than 28, for re-verification of their work authorization. In response, more workers decided to strike the next day. By then, Silva says, “We were organized … We were almost ready.”

That led to a dramatic confrontation on June 1. Workers had planned to mass outside the factory, with those whose shifts ended at 8 a.m. streaming out of work to meet those already picketing. Having heard about this plan, workers say, Palermo’s barred employees from leaving the building, physically blocking the doors and telling workers they would be fired if they left. Some workers escaped through emergency exits, while others contacted Voces, who called the police. Police collected testimony when they arrived.

The same day, Sacks filed charges of illegal anti-union retaliation with the NLRB, and requested a federal court injunction to force a quick resolution prior to next month’s election. On June 2, according to Neumann-Ortiz, Palermo’s sent the first of multiple waves of letters terminating some strikers.

The most recent termination letters, dated June 8, told workers they were being terminated for failure to comply with the 10-day immigration verification deadline announced May 30. Voces alleges that Palermo’s created the 10-day deadline to break the union, and falsely pinned it on ICE. Neumann-Ortiz says that the company “claimed that they were just abiding by this new mandate on the part of ICE, and yet the local ICE confirmed with a representative of the Steelworkers that it wasn’t coming from them. It was coming from the company.” She says workers began receiving these letters Monday, even though the Department of Homeland Security “has informed the company that the verification process has been suspended.”

Workers who were on Palermo’s payroll as of June 2 will be eligible to vote in the NLRB election, even if they’ve since been fired, while temp workers will not. Workers will begin testifying on their injunction request today.

“We need your help to win this fight,” Ramirez told the crowd at the recall GOTV rally June 3. He asked them to call Palermo’s “to tell them that you won’t buy their pizza 'til they negotiate with the workers and respect their right to organize.”

Workers have since called for a formal boycott of Palermo’s, and have been joined on the picket line by local activists and union members. Their cause is being promoted by the AFL-CIO and others. The strike, which had been focused on demanding the company voluntarily recognize the union, is now focused on demanding that Palermo’s reverse the firings, end the use of temp workers and honor the NLRB election process.

Neumann-Ortiz said last night that given the scheduling of the NLRB election and ICE’s statement that there is no 10-day deadline, Voces had reached out to Palermo’s to discuss negotiating to bring back the fired workers and end the strike. But “the company has refused to negotiate in any way.”

Workers estimated that 60 to 80 percent of Palermo’s workforce went on strike. “There’s still a lot of fear,” says Silva.

“We try to talk them into coming together with us,” says striker Juan Jasso. “Some of them are scared, that’s why they’re not here. But most of them are out fighting.”

Silva says the strike is showing Palermo’s “that we’re not machines. After so many years, we’re not part of the machinery.” After ignoring workers for years, he says, “Now they’re paying attention.”