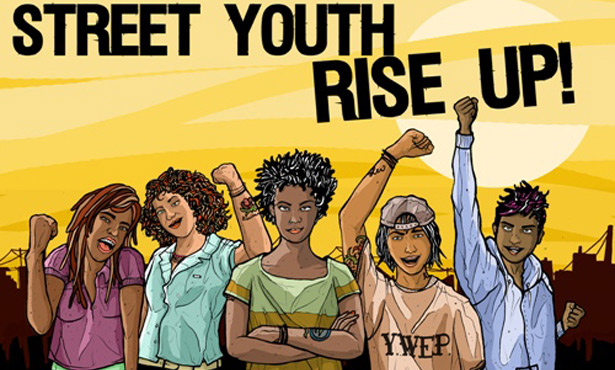 When youth who live on the streets and work in the sex trade or other informal economies are victimized or abused, often the institutions that are supposed to help them—the police, hospitals and clinics, social service and non-profit agencies, homeless shelters—do more harm than good.

A recent report by the Young Women's Empowerment Project in Chicago quantifies and analyzes this problem and describes and promotes a two-pronged solution wherein youth develop their own systems and networks for self-help and healing while also working with institutions to provide better services.

YWEP youth leaders, who have a policy of not revealing their identities, worked together to answer my questions about this initiative. They said, "Institutions have so many rules and guidelines that prevent young people from even feeling comfortable in institutional atmospheres, it doesn't give them the room to grow. We don't dictate a young person's future and make decisions for them, we support them to make it on their own because we believe they know what they need to do to survive."

The report notes that much of the bad treatment young people receive is related to the fact or supposition that they survive through sex work or other informal work on the street, combined with general prejudice toward LGBTQ and gender non-conforming youth. While many organizations dealing with sex workers aim to help them leave sex work, YWEP maintains that it is a valid individual choice and practices a harm reduction philosophy to help young people stay physically and emotionally safe and healthy no matter how they make a living.

The youth leaders told me, "Through the work and programs at YWEP, we have all had individual experiences of developing new skills, making important relevant and positive changes in our lives and feeling like we have a place to call our own in a world that is adultist, racist, sexist and homophobic and threatens our daily existence."

YWEP has launched a "Bad Encounter Line" or BEL project where youth can use forms, a phone line, blank zines or meetings with advocates to report specific bad experiences with institutions including police, health care and non-profit agencies. The report, which analyzes 146 of these reports since September 2009, shows that police received the most complaints, followed by health care agencies. The report is also based on incidents reported to advocates and staff wherein youth did not use the BEL structure. Almost all the reports came from youth of color, and transgender youth were disproportionately likely to have bad experiences.

Horror stories included being arrested and-or sexually assaulted and harrassed by police when reporting a rape or other crime, or simply when standing on the street. Youth also reported a prevalent problem with being placed in psychiatric care against their will when reporting a crime or seeking health care. In some cases health professionals decided youth needed psychiatric care just because they are transgender, or because they had "too many sexual partners." One transgender youth reported being openly mocked by a nurse and patients at an emergency room, then denied entry to the emergency room (told it was "full"), because their name didn't match their appearance. Such experiences mean youth often don't seek medical attention at all when they need it. The YWEP leaders told me, "The constant oppressions create a lack of trust between the young people and the adults in the helping institutions ... A lot of adults that work in these agencies do not see the power or relevance of the youth voice. Because they are set up to help, a lot of people assume these agencies are doing good, even though they might actually be harming young people."

The complaints about police included being told they could avoid arrest in exchange for sex, then often being arrested even if they did give in to the officers' demands. One girl reported being arrested after she ignored an officer saying "Come over here, girl with all that ass"—and told him that is not her name. Many complaints were also lodged about the Department of Children and Family Services, including that children were taken away immediately after birth if young mothers declined to give a father's name.

The report notes that surprisingly few BEL complaints have been filed regarding non-profit agencies, given that they hear complaints about such agencies frequently; the report surmises that maybe youth feel less comfortable making a written complaint about such organizations.

The highest number of BEL complaints came from Englewood, a very low-income African American neighborhood on the city's south side; and Lakeview, a relatively affluent neighborhood that is home base to many youth who live and work on the streets.

The study describes the movement Street Youth Rising Up!, which focuses on empowering youth to stand up for their rights and to work together to provide for themselves some of the resources and care that they are not getting from institutions. The group has worked with the Chicago Women's Health Center to train youth in basic reproductive health care and self-exams, and also helps youth file grievances and demand their legal rights from government and other institutions. They note that these rights include the right to decide to live without a "traditional" home (defined as "home free") and to have as many sex partners as one chooses, as well as the right to make a living in informal economies  including the sex trade.

YWEP has published a Street Youth Bill of Rights outlining such rights and how institutions can respect them, and they are asking institutional representatives to sign on and help them promote the movement. The BEL program also continues, creating a formal outlet to press for change from specific institutions and more generally, and also allowing youth to share practical advice (published in a zine) helping them to pragmatically navigate institutions. The YWEP leaders told me that a West side shelter is using the bill of rights to revise their housing contract and make it more youth-friendly, and organizations including the Broadway Youth Center, Sage Community Health Collective, Project Nia and the Chicago Women's Health Center have formally endorsed the bill of rights.

They said, "We are organizing and building power. After we get 10 more organizations to endorse we will use our collective power to try to influence policy at an institutional or governmental level... We believe institutions will change when they are approached by young people who have first-hand experience in the street economy and by hearing our personal testimony of what the hell we have been through."