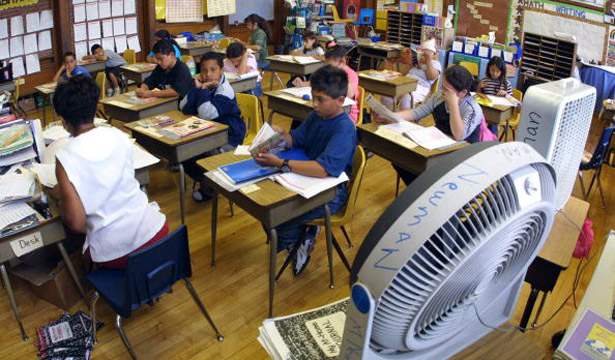 The debate between teachers, parents and Mayor Rahm Emanuel continues over how many hours Chicago Public Schools students should be spending in the classroom. Those opposed to a longer school day cite the heat of many non-air conditioned buildings and the notion that Chicago schools’ issues go much deeper than the number of hours in class. (Photo by Tim Boyle/Getty Images)

The Chicago Teachers Union lost an important skirmish with Mayor Rahm Emanuel last year when the state legislature passed Emanuel-backed legislation requiring a 75 percent vote to authorize a strike – a high number seen as a blow for teachers unions in Illinois.

But the attack apparently helped energize and mobilize the Chicago Teachers Union (CTU), as a whopping 89 percent of teachers voted on June 11 to authorize a strike come fall (actually late summer) as highly contentious contract negotiations stretch on. Chicago teachers last went on strike in 1987.

Emanuel acknowledged the overwhelming vote but tried to minimize its significance by asking the public and media to focus on other numbers – the increased hours he wants kids in school. Teachers have repeatedly said they are not against a longer school day or school year, but demand appropriate pay raises in return. Emanuel rescinded a contractually obligated 4 percent raise for teachers during his first year in office, and now his administration is proposing a contract with a 2 percent raise while lengthening the work day from seven hours to seven hours and 40 minutes.

Many parents have pushed for a compromise, with more time in school but not as much as Emanuel and Chicago Public Schools CEO Jean-Claude Brizard are demanding. Critics of the longer day cite oppressive heat in many non-air conditioned buildings, other demands on students’ time and the inescapable fact that Chicago schools’ problems go much deeper than the number of hours in class.

At five hours and 45 minutes, Chicago students have one of the nation’s shortest days. But teachers say the actual amount of instruction in Chicago schools is on par with other schools nationwide. There is no easy fix for the systematic economic and social problems that impact Chicago students, but more resources and smaller class sizes would likely do more than extended days to improve student engagement and performance.

The union says the administration’s contract proposal will result in larger class sizes. Jackson Potter blogged on the union website:

The union blasts the administration’s proposal for increasing the focus on standardized test-based student performance in evaluating teachers, including an emphasis on “merit pay.” Nationwide, teachers have long complained that evaluating their performance based heavily on standardized testing is unfair to dedicated teachers in under-funded, low-income and immigrant-heavy schools and curbs their ability to teach creatively.

In the wake of the strike vote Emanuel also touted the fact that 60.6 percent of Chicago Public Schools students who were freshmen four years ago graduated this year – the highest rate since at least 1999. But the insinuation that this improvement is because of measures pushed by his administration comes off as disingenuous when one considers that these measures have only been rolled out in recent months and not in all schools.

Emanuel said the strike vote does not affect ongoing contract negotiations with the teachers union, but the union has noted that taking the vote several months before they might strike was meant to provide leverage in the negotiations and allow 1,500 retiring teachers to vote. With more than 25,000 unionized teachers, CPS is the third-largest school district in the country and the CTU is the largest member of the American Federation of Teachers.

Emanuel has portrayed teachers as putting their interests before students’ well-being, and professed his dedication to Chicago students – framing his battle with the teachers as a fight for opportunity and equality for low-income students. But many parents and students have spoken out in support of teachers, who often already put in many unpaid hours and often spent money out of their own pockets to buy supplies.

There has been much intrigue around efforts to generate community support (or the appearance of it) for the Emanuel administration’s reform policies, including revelations last year that politically connected ministers had paid church members to show up at community meetings in support of administration proposals to close so-called failing schools. Around the strike vote, many parents received robocalls attacking the teachers' decision to hold an early strike vote. The calls and other efforts against the teachers have been linked to national astroturf "education reform" groups also active in California and other states where public sector unions have squared off with city and state officials.

Meanwhile, it turns out that Obama strategist David Axelrod’s former public relations firm AKPD Media and Messaging is behind ads attacking the teachers union. Long-time progressive school reformer and small schools advocate Mike Klonsky noted in a blog post about this revelation that Emanuel “seems hell-bent on destroying the city's public employee unions.” Klonsky also questioned the motivations of American Federation of Teachers president Randi Weingarten sharing the podium with Emanuel in support of his massive new infrastructure plan – with a heavy focus on privatization – just weeks after she marched with Chicago teachers calling for a strike vote. (The infrastructure plan’s marketing is spearheaded by another of Axelrod’s former outfits, ASGK Public Strategies.)

Teachers in this town have been demonized, demoralized, and disrespected. No profession is beyond criticism and no public school system is without significant problems. But taking a sledgehammer approach to CPS teachers and their union has backfired on the Emanuel administration and his schools CEO, Jean-Claude Brizard. And all the radio ads and robo calls funded by out of town, union-busting billionaires doesn’t alter that fact.

While longer days and closing schools are the prominent issues in Emanuel’s battle with union teachers, the conflict has much deeper significance in terms of ongoing battles for the future of public employees unions. And while Emanuel and others who figure into the administration’s plans are considered far to the left of Wisconsin Gov. Scott Walker, the battle promises to continue nearly as polarized and hard-fought. Stay tuned.