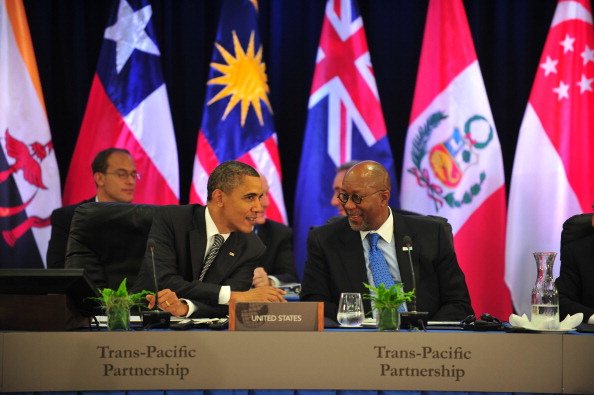 You might think corporate money corrupts our political system, but the international trade system is where money really talks.

The White House is touting the Trans-Pacific Partnership as a "21st century" trade deal, but many activists see it as a regression into economic imperialism. The pact currently in negotiations—covering Australia, Brunei Darussalam, Chile, Malaysia, New Zealand, Peru, Singapore, the United States and Vietnam, with Canada and Mexico recently joining the talks—aims to establish a new trade regime that could intrude on domestic laws that affect millions of workers and consumers, from their weekly paycheck to their prescription medicines.

Thanks to some intrepid activists with Public Citizen and the Citizens Trade Campaign, the public can glimpse at the closed-door negotiations through a batch of leaked documents. So far, what’s trickled out suggests that Washington is determined to scale up the controversial framework of the North American Free Trade Agreement (NAFTA), creating a new trade regime that exploits inequality between workers and employers within countries, and global inequalities between the “developed” and “developing” worlds.

The TPP, if current proposals are enacted, would grant extreme powers for corporations to act as quasi-legal entities, and potentially to take states to court in order to dismantle environmental, consumer safety, or labor protections that they feel “unfairly” pinch their profit margins. Building on previous trade agreements like NAFTA that have given foreign investors sweeping powers to circumvent domestic regulations, the proposed framework would establish a litigation system designed to protect the “rights” of investors above citizens.

Such trade deals have often been marketed to American workers as a boon for jobs and domestic industries, but they’ve generally been condemned by unions and activists as a lose-lose for workers at home and abroad, encouraging companies to capitalize on poorer economies where sweatshops can flourish unfettered by regulatory protections. Historically, trade deals like NAFTA and its Central American counterpart, CAFTA, are associated with economic displacement and instability, the erosion of labor and human rights standards, and the subordination of national sovereignty to foreign investors.

This new “partnership” aims to lock poorer nations like Vietnam and Peru, which are known for weak labor protections and violations of workers’ rights, even more tightly into a labor and trade system in which capital trumps law. Meanwhile in “emerging economies” like China, often seen as the chief beneficiaries of global trade, such trade deals seem designed specifically to kick the labor standards even further down. "A lot of corporations and major retailers seem to feel that Chinese workers are now demanding too much, that they're being paid too much, and they want to move offshore to even lower [paying] countries like Vietnam," says Arthur Stamoulis, executive director of Citizens Trade Campaign. "So this is absolutely about increasing and furthering the global race to the bottom."

For U.S. workers, Stamoulis says the TPP will draw workers in both wealthy and poor countries into a hemispheric downward spiral. "The more trade pacts we approve like this, the less and less tax revenue there is for new public services, the greater the downward pressure on wages and benefits of the jobs that are left," Stamoulis says. "This is an example of a trade agreement that only benefits those at the very top."

Market liberalization has previously spelled disaster for many U.S. workers. The recently finalized South Korea-U.S. trade deal, for instance, has been projected to eliminate about 159,000 U.S. jobs, according to a 2010 study by the Economic Policy Institute, and threatens to disrupt trade regulations in both nations' auto industries.

According to Public Citizen’s analysis, working people might not only face the threat of job loss under TPP, but also the undermining of Medicare and Medicaid programs, new copyright restrictions that inhibit internet freedom, or attacks on the Buy American policy, which promotes the use of U.S. goods and services for government contracts.

As Josh Eidelson reported at Salon, union officials have criticized the lack of transparency in the negotiations and denounced the administration’s pandering to multinationals. But the secrecy surrounding the agreement poses a challenge for labor and community groups, which are isolated both from the trade talks and from the lawmakers expected to rubber stamp it.

When investors are able to invoke their “rights” against national governments, the effects may manifest in unexpected aspects of our lives. Huffington Post reports that the pretext of destroying trade barriers has been used to attack U.S. measures like “dolphin-safe tuna labelling and anti-teen smoking efforts.”

In one CAFTA investor-state dispute case, documented by Public Citizen, the Wisconsin-based mining firm Commerce Group Corporation waged a legal challenge against El Salvador after losing environmental permits due to a failed audit, “claiming expropriation and denial of fair and equitable treatment.”

Neoliberal ideology has redefined “fair and equitable treatment” as deference to corporate sanctity. As the talks speed ahead, the public may not even become aware of the Trans Pacific Partnership until it begins to directly harm their livelihoods. Now the damage is already happening behind closed doors, as trade officials quietly change the locks on the institutions that are supposed to serve the public.