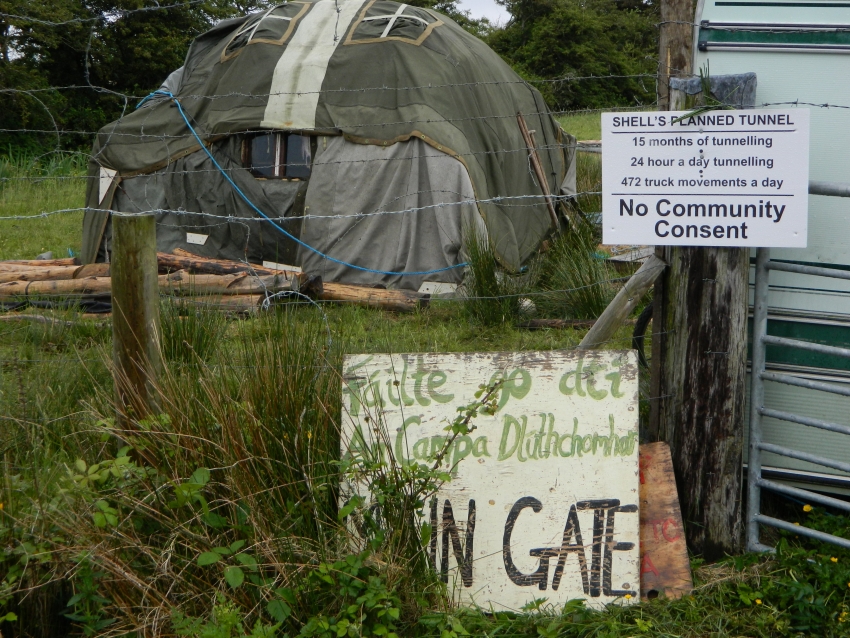 The Rossport Solidarity Camp is home to activists opposing Shell's natural gas operations that would forever change life on a remote western Ireland peninsula. The jobs that would be created by a natural gas pipeline and terminal, they say, would not compensate for harm to local farmers.   (Photo by Kari Lydersen)

POLLATHOMAS, IRELAND—This remote peninsula on Ireland's west coast is known as a bastion of beauty and serenity, at least for those who don't mind persistent rain and chilly winds driving waves against the stunning rocky cliffs and unspoiled sand dunes. But for years the peninsula that is home to the tiny town of Pollathomas has also been the site of a battle over the ownership of natural resources and the old jobs-versus-environment debate, as the company Shell and corporate partners are seeking to exploit the lucrative Corrib gas field under the ocean 60 kilometers off shore.

Two decades after interest in the gas field was piqued, locals and resident solidarity activists continue to fight against Shell's plans to build a gas terminal on the coast of the peninsula. Signs along the one narrow quiet country road tracing the promontory's circumference read, "No Consent," "Shell Out" and "No Haulage." The beauty of the beaches spilling into mud flats below dramatic hills has been marred by Shell's industrial operations. Gardai (police) in fluorescent green vests ply the road in vehicles and stand around on foot—more police on a several-mile stretch of road than I saw in several weeks in the rest of the country. Private security contractors also work the area.

Along the road, a hand-painted sign and tangled barbed wire mark the entrance to the Rossport Solidarity Camp—an outpost of ardent opponents of gas exploitation. Many Irish towns have welcome signs noting that the town is "twinned" with sister cities elsewhere in Europe. The camp sign says it is "twinned with Niger Delta and Gulf of Mexico." Bikes rest throughout the camp, and tents made of heavy military canvas are fortified against the constant rain.

Up the road from the camp a local activist traipsing the road in barefeet despite the chill pauses to move a dead rat gently into the bushes and later checks on a sheep entangled in a fence. He explains the splits in the movement against Shell, wherein some opponents are open to negotiations if Ireland gets a better deal or the terminal is moved farther offshore, while others are flat-out opposed to gas extraction.

Shell and government supporters argue that the terminal would provide an economic boost sorely needed in these tough times, creating 800 construction jobs and 130 permanent jobs.

On its website, Shell says the company has met with protesters and fishermen concerned about water contamination, and altered its pipeline route and committed to stringent water treatment as a result. The company's website boasts of quality working conditions, including 2 million work hours and 365 days injury-free in the past year.

Meanwhile several prominent studies show that Ireland would be getting a much smaller slice of the actual gas profits than almost any other country typically gets from natural resource deals.

Supoport is still strong for the "Rossport Five," locals who in 2007 were jailed for three months on contempt charges for disobeying an injunction regarding protesting against Shell. The activist I spoke with noted that local farmers and teachers feel they are just protecting their historical land, "and you know land is a big deal in Ireland."

In a Q & A for the Goldman Environmental Prize, awarded to Rossport organizer Willie Corduff, the group Kilcommom Community said that Shell's operations have made residents feel "under seige":

Many residents' first experience of the consortium is one of threats, bullying and intimidation. Many felt pressured to sign commitments to allow their land to be used.

Shell and government proponents have billed the gas as an important domestic source that would meet a large portion of Ireland's energy needs, though several regular residents I talked with noted that the gas will be sold on the open market—by a foreign company—offering no real energy security for Ireland.


Given Ireland's tumultuous and painful political history and recent economic turmoil, it's clear that the controversy over the gas terminal taps into deep-seated feelings about sovereignty, land ownership, survival and freedom. I can only imagine the controversy is also exacerbated by increasing interest in fracking for natural gas in western Ireland; and complicated by the struggle to reduce carbon emissions where natural gas plays an important role as a relatively clean-burning fuel.

As the turf-cutting controversy I wrote about previously shows, it seems clear that big-picture environmental promises and even the prospects for some jobs pale beside the importance of protecting land and traditional ways of life in these parts.