Veterans Forced to Attend Anti-Union Meetings on Army Base 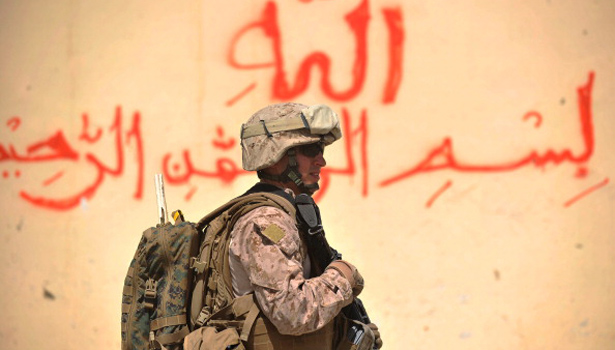 A U.S. Marine in Helmand Province, Afghanistan. Many veterans are facing difficulty from employers trying to bar them from joining unions upon their return to the U.S.   (Photo by Adek Berry/Getty Images)

Jason Croic is a Marine combat veteran who served 28 months in Iraq. When he came home, he found a job working for $18 an hour as a mechanic on Stryker vehicles for General Dynamics Land Systems in Fort Lewis, Washington. Croic now has a new combatant, as his employer is attempting to stop him and his fellow contractors from joining Local 286 of the International Union of Operating Engineers (IUOE).

For the last six months, Croic and 120 of his co-workers, nearly half of whom are veterans, have been forced to attend anti-union meetings, in which General Dynamics managers make them watch films about why unions are bad. General Dynamics has routinely told workers that if they vote to join union that it will likely lead to General Dynamics losing their contract with the U.S. Army. On several occasions, General Dynamics has even flown some of their top corporate officials out on Lear jets from their corporate headquarters in Sterling Heights, Michigan, to explain to the workers why they shouldn’t join a union.

The union election is scheduled on June 29, and General Dynamics has been forcing workers to attend anti-union meetings nearly every day for the last month. These anti-union meetings aren’t being held on General Dynamic’s private property, but on public property at the U.S. Army base at Fort Lewis. The Army declined to comment for this story and has not taken a position on these meetings nor the claims that the workers voting to join a union would make them less attractive to the Army.

"I think it's bullshit the way they are talking to us,” says Croic. “You think when it's prior military veterans who have done their part, they wouldn’t do this kind of thing to us.”

The case shows the limitations of President Barack Obama's Executive Order 13494, which went into effect last December. The order prohibits federal contractors from being reimbursed for the cost of their anti-union activity. Under the cost principle of federal contracts, companies can bill additional unexpected labor costs above the price of their initial contract price to the federal government for reimbursement. The new rule simply prohibits federal contractors for seeking reimbursement for additional costs related to union-busting but it does not prohibit contractors from spending non-reimbursed money on union busting.

“The rule doesn’t mean they can’t hire anti-union consultants or hold meetings. They just can’t charge the costs to any contract,” says former Acting Deputy Administrator of Office of Federal Procurement Policy Richard C. Loeb, now a professor at the University of Baltimore Law School. Thus companies like General Dynamics, which received $19 billion in federal contracts in 2011, are essentially allowed to write in the costs of any potential union-busting before the bid for a project; the rule only prohibits them from asking for reimbursement later.

Rep. Adam Smith (D-Wash.) wrote a letter to General Dynamics, noting that the company has coded funds being used to bring in union busters for reimbursement. Rep. Smith called on General Dynamics to investigate “the occurrence of cease and desist captive audience meetings” with a group of retrofit mechanics. IUOE Local 286 claims that the meetings have been held during business hours and have been coded as “training.”

General Dynamics Land Systems President Mark C. Roualet responded to Rep. Smith, saying, “We believe it is important for our employees to have both sides of the story, and that is exactly what we have been trying to communicate during the meetings you describe. We have conducted these meetings in a non-threatening and non-coercive manner and in according with applicable laws. Meetings held since January 2012 have not been charged as training and have not been billed to our customer. “

IUOE Local 286 has not been given the same opportunity to come and hold pro-union meetings as the company is allowed with its anti-union meetings. When asked about the union’s request to come on General Dynamics’ property within Fort Lewis to be given equal time to present their viewpoints, the company responded to Rep. Smith that doing so "would be a 'steep and slippery slope,'” and would set a precedent to allow any third party “'equal access' (union, religious group, political party, etc.) to our employees to promote their agenda."

General Dynamics Land Systems spokeswoman Marie Remboulis told Working In These Times, “General Dynamics is a fair and equitable company that wants to take care of our employees. From that perspective we believe it’s important for our employees to have both sides of the information. We have conducted these meetings in the spirit of openness in a manner that is in everything way applicable with regulatory laws.” Remboulis says that while the company would not let the union hold meetings in Fort Lewis, they have allowed the union to post notices about where union meetings will be held on bulletin boards.

“The more meetings they have, the more the guys want to go union. The company is just making itself look bad,” says IUOE Local 286 organizer Jeff Alexander. “The bosses are claiming they are making no money while our guys are being told they can only make $18 an hour... But these guys are seeing them flying their corporate executives in on private jets to stop this union drive and they know General Dynamics isn’t broke.”

Alexander remains confident as the union election approaches. However, as the tide turns in the union's favor, General Dynamics has been telling workers in the captive-audience meetings that it will appeal any election decision and drag out the process of certification.

Thus, even if the workers win the election, their taxpayer-funded company could find a way of using the courts to stop the election from being certified. For many of these Iraq and Afghanistan veterans, it appears the freedoms they fought for don't include the freedom to join a union.