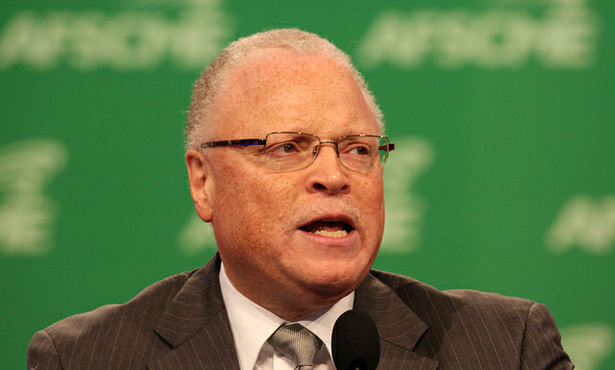 Newly elected AFSCME President Lee A. Saunders addresses delegates at AFSCME's International Convention in Boston, soon after he was elected Secretary-Treasurer in 2010.   (Photo by Luis Gomez/AFSCME)

Yesterday, Lee Saunders, secretary-treasurer of the American Federation of State, County and Muncipal Employees (AFSCME), defeated CSEA Local 1000 President Danny Donohue by more than 100,000 delegate votes (AFSCME does not vote in a direct election for its president but through delegates representing members) to become the union's fourth president in 75 years. Saunders will become the first African-American president of the 1.3 million-member AFSCME, whose famous 1968 Memphis sanitation workers' strike was being supported by Martin Luther King Jr. at the time of his assassination.

The election of the 60-year-old Saunders, who was backed by outgoing AFSCME’s President Gerald McEntee, will likely mean that many of the current top headquarters staff of AFSCME will stay in place and that AFSCME will maintain a similar course to that plotted under McEntee in recent years.

"We had a vigorous and energetic campaign, but now the union will pull together to win victories for working families and our members all across this great country," said AFSCE President-elect Lee Saunders in a statement. "We know that Wall Street and their allies are engaged in an all-out assault against our members and the services we provide. They know that AFSCME stands in the way of their efforts to destroy the middle class. We are united in our commitment to stand up for the men and women who care for America's children, nurse the sick, plow our streets, collect the household trash and guard our prisons.”

Donohue pledged to continuing working with Saunders to improve the union.

“We concede this union election. But, we’re not conceding the need to fight for a better union,” said Donohue. “At this convention, Lee Saunders has echoed our goals. AFSCME members are counting on him to live up to those commitments. All of us, together, as one union, we’re going to rebuild, renew, unify and fight the enemies of public services and public workers.”

Despite ASFSCME being one of the largest unions in the country, the election process that involved nearly 3,000 convention delegates took place largely out of the view of most its members. AFSCME, which sponsored the live streaming of the Netroots Nation conference a few weeks earlier in Providence, Rhode Island, did not do the same with its own convention. Nor was there much live tweeting of the conference going on by delegates in either pro-Saunders or pro-Donohue camps, so AFSCME members at home could not really follow the close debates on resolutions on the floor.

Edwards said several key issues about how public-sector union members might take on their employers in a post-Wisconsin world were hardly mentioned.

“We have forgotten not only how to use our real weapons of withdrawing our labor in various ways, instead we imagine that collecting money for the People fund [political action fund] can buy us power, which it can’t. We had the opportunity to take on Scott Walker through a general strike but instead ASFCME led the retreat into the recall campaign, which if it had worked could only have benefited the Democrats,” says Edwards, who feels the union hasn’t fully grasped the role Democrats have played in hurting public-sector workers. Edwards was particularly dismayed by the removal of language critical of Obama’s Secretary of Education Arne Duncan for his attacks on teachers unions in a motion defending public education.

“I think rank-and-file reformers are going to have to hold the leaders' feet to the fire every time they duck the question of actually using union power to win things," says Edwards. "I think we need to take a hard look at the People fund, the way it becomes a top priority over everything else, which involves a distorted view of what unions are for, and also the way other money is used. It seems we can always afford the most lavish conventions, but Wisconsin Council 40 had to lay off 35% of its staff and the remaining workers took 25% pay cuts to try to keep the union going.”

As Saunders noted, the union is certain to face big challenges during his presidency. It’s unclear what will happen next within AFSCME, as its executive board is still divided nearly evenly between the two candidates' supporters, with Saunders having a slight majority. Some Saunders supporters say their candidate is receptive to outsides ideas. It will be interesting to see just how much Saunders opens up the union's internal decision-making process to outside observers, and how willing he may be to take on Democrats that are willing to attack public sector unions.