Dems Paint Romney as “Outsourcer-In-Chief,” But Will Obama’s Trade Deal Blow It? 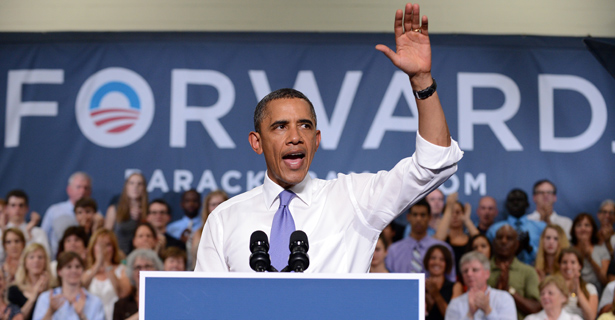 The Obama administration and Democrats have been busily puncturing Mitt Romney’s record as an experienced “job creator,” with a multi-pronged attack on Romney’s role as a “pioneer” in offshoring jobs while heading up the private-equity fund Bain Capital

Backed up by an ever-mounting supply of evidence from the New York Times, Boston Globe, and the Washington Post, Obama and the Democrats have shredded Rommey's arguments that he is the man to restore employment.

Yet recent leaks reveal that the Obama administration has been secretly negotiating with Pacific Rim nations the Trans-Pacific Partnership (TPP) trade deal, based on the job-destroying NAFTA model. Obama—as with his trade deals last year with South Korea, Panama, and human-rights pariah Colombia—is once more falling into line behind CEOs in promoting what he as a candidate fiercely denounced in 2008 as “trade deals like NAFTA and China [that] have been signed with plenty of protections for corporations and their profits, but none for our environment or our workers who've seen factories shut their doors and millions of jobs disappear.

Thus, the Obama administration’s efforts to pass the TPP muddle the partisan divide on the offshoring issue, which his campaign is now using so effectively against Romney. With 86% of Americans convinced that the offshoring of jobs contributes significantly to the nation’s economic problems, the 2012 election’s outcome may very well hang on the perception of Obama as the defender of the public interest on this issue.

Fortunately for Obama, Romney’s well-documented support for the offshoring of jobs has monopolized the media's attention, thanks to an effective Democratic and labor onslaught. New polling from NBC/The Wall Street Journal show significant gains for Obama in swing states, where a new ad campaign is being focused. A combination of front-page revelations about Bain Capital, powerful rhetoric from Obama (plus this video comparing Bain Capital to the Sopranos’ Mafia operation), skillfully crafted ads, and cleverly–timed legislation are keeping the spotlight on Romney.

Mitt Romney’s financial company, Bain Capital, invested in a series of firms that specialized in relocating jobs done by American workers to new facilities in low-wage countries like China and India. During the nearly 15 years that Romney was actively involved in running Bain, a private equity firm that he founded, it owned companies that were pioneers in the practice of shipping work from the United States to overseas call centers and factories making computer components, according to filings with the Securities and Exchange Commission.

In New England on Monday, Obama mocked Romney’s efforts to distinguish between supposedly positive and negative forms of outsourcing and offshoring, thundering:

Gov. Romney's commitment to outsourcing is not just part of his record, it's part of his overall economic vision that he and Republicans in Congress want to implement if they win this election.

You don't need someone trying to explain to you the difference between outsourcing and offshoring. You need someone who's going to wake up every single day and fight for American jobs and investments here in the United States.

Meanwhile, a new TV ad, which Priorities USA Action plans to spend $10 million airing, features a worker named Mike Earnest who was employed at Bain-owned AMPAD in Marion, Indiana. Earnest recounts how he was assigned to building a stage, from which Bain officials announced that the once-profitable plant was closing:

Mitt Romney made over a $100 million dollars by shutting down our plant and devastated our lives. Turns out that when we built that stage it was like building my own coffin, and it just made me sick.

Labor and progressive Democrats are hoping to draw a stark contrast with Romney and the GOP by pushing for a vote shortly after the July 4 holiday on the Bring Jobs Home to America Act. The measure would withdraw tax incentives for relocating jobs overseas and extend tax credits to corporations bringing jobs back to U.S. plants. The proposal also coincides with Obama’s severely exaggerated touting of a trickle of returning jobs as a meaningful “trend” toward voluntary “insourcing” by U.S.-based firms like Master Lock.

Rep. Tammy Baldwin (D-Wisc.), the Democratic candidate for a vacant U.S. Senate seat, told a Milwaukee news conference last week, “We’ve been seeing manufacturing taking it on the chin for years. We’ve got to take away the perverse incentives to shift our industrial base overseas.”

In an interview with Working In These Times, Baldwin noted that many of the firms engaged in offshoring jobs are already paying little or no corporate taxes. But she argued that the bill could be a starting point that would build momentum toward a sweeping policy to rebuild America’s industrial base.

“This is not a substitute for a more comprehensive manufacturing policy, ” she stressed.

Moreover, the pro-labor Baldwin said that she had joined other members of Congress in signing a letter to U.S. Trade Representative Ron Kirk objecting to the Trans-Pacific Partnership’s provisions which would ban the use of “Buy American” regulations and strengthen corporate-run dispute-resolution panels over regulations democratically created by the U.S. Congress and state legislators.

The TPP’s staunchest opponents characterize it as a "backroom trade deal for the 1%." While the working text of the TPP has been withheld—until the recent leaks—from representatives of labor, environmental, public-health and other organizations, top corporate officials have enjoyed privileged access. As Lori Wallach, director of Global Trade Watch, has observed:

[M]ore than 600 business representatives serving as official U.S. trade advisers have full access to an array of draft texts and an inside role in the process. The strategy is to squelch informed debate until a deal is signed and any alterations become difficult.

The TPP’s shroud of secrecy is triggering cries of protest both in Congress and at the grassroots level, with the Texas AFL-CIO particularly active. The combined weight of this opposition, if intensified, may be sufficient to derail the completion of negotiations and congressional approval this year.

If the TPP can be blocked, the protests will have performed an enormous service to Barack Obama. While Romney almost surely lacks the skills or desire to use the Trans-Pacific Partnership against Obama, his corporate backers have the financial and PR resources to launch a massive ad campaign against Obama’s support of the TPP, thereby discouraging potential Obama voters.

The electoral stakes around the offshoring issue are huge, as Jamelle Bouie argues at The American Prospect:

For Romney to win, he needs to consolidate a huge majority of the white vote. To paint Romney as an “outsourcer-in-chief” is to damage his credibility with the non-college-educated whites who will form the basis of a Romney victory in states like Ohio, Iowa, and Wisconsin.

After all, these are voters whose lives have been most affected by the outsourcing pioneered by Bain-owned companies and who have been hit hardest by the relentless profit-seeking of companies like Bain. If the Obama campaign can identify Mitt Romney with outsourcing, then they can blunt his appeal with these voters and keep him from breaking the threshold for white support—around 60 percent.