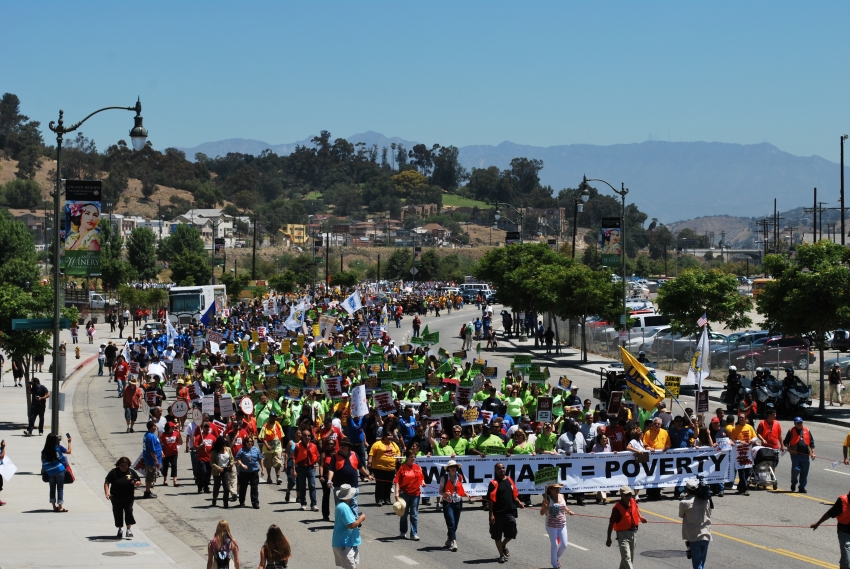 Thousands gathered on June 30th to protest Walmart's plans to open a store in L.A.'s Chinatown. (Photo by Marc Goumbri)

After losing her job in advertising when her small-business employer folded during the recession, Marie Kanger-Born, 54, found herself turning in desperation a year ago to a night shift job stocking shelves at a suburban Chicago Walmart. But she wasn't happy with what she calls "the weird culture of fear" that its hovering, hectoring supervisors created, the inadequate staffing that forced everyone to work faster and at risk of injury, the erratic scheduling, the refusal to pay for overtime work, and the retaliation aganst anyone who was not subservient--often through cuts in hours of work.

Today, Kanger-Born is far from home, joining an anticipated 10,000 protesters in the Chinatown section of Los Angeles, many of whom will be telling Walmart that they don't want its stores in L.A. Kanger-Born has her own message from "associates" like her to the corporate execs in Bentonville, Arkansas: "They need to listen to us. We know what's going on at the stores. And second, we would like to be treated with more respect."

You could call it wishing Walmart an unhappy birthday. Next week Walmart is officially celebrating its 50th anniversary. As a counterpoint, Saturday's demonstrations in Los Angeles, New York, Chicago and other cities are calling attention to the flawed record of the world's largest retailer—abor rights abuses in stores, suppliers, warehouses and all along the company's vast logistical network, devastation of small businesses and communities, environmental degradation (despite many "green" initiatives that cut Walmart costs), and the political and economic mis-use of its vast power.

Though many groups are involved, two projects supported by the United Food and Commercial Workers (UFCW) union have taken the lead. One is Making Change At Walmart, a public education campaign. The other is Organization United for Respect, or OUR Walmart, an association of associates, which is not a union but a looser, member-run group that is strongly dependent on Internet communication but also sponsors meetings and protests in real time and places, including the workplace.

Kanzer-Born discovered it when she was searching for information about the company's overtime policy and has since been an active supporter, even though Walmart often treats the group like a union, holding anti-OUR Walmart meetings and even firing activists.

The unhappy birthday parties highlight the tough time Walmart has faced recently in the court of public opinion.

The accumulating pressure from so many directions gives organizers reason to believe they can indeed change Walmart. Making Change At Walmart Director Dan Schlademan has this birthday wish: "I'm hoping the next 50 years will be different from the last 50."