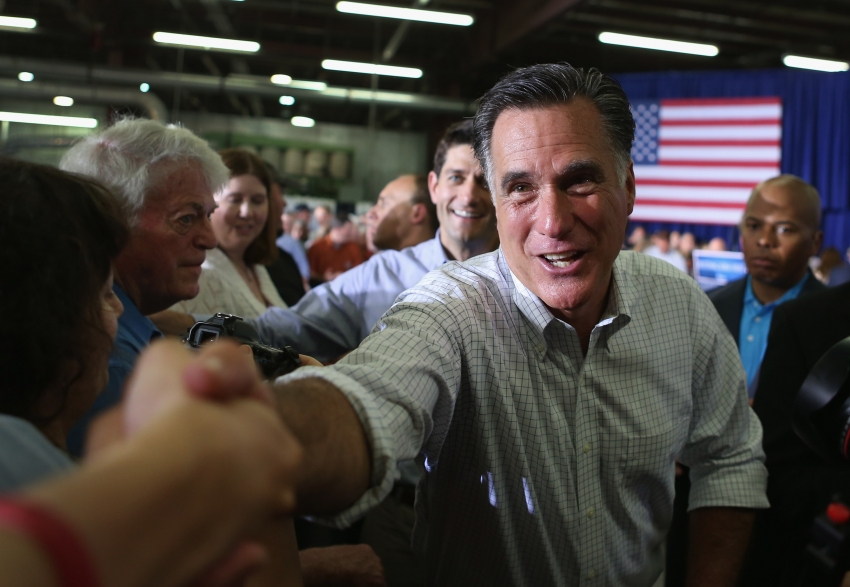 Mitt Romney greets supporters in Janesville, WI on June 18th. That day, workers from the Sensata plant in nearby Freeport, IL held a protest urging Romney to visit Freeport to learn how plans to outsource jobs would adversely affect the community. (Photo by Joe Raedle/Getty Images)

A manufacturing and developing plant in Freeport, Ill., which is owned by Bain Capital, the private equity firm Republican presidential nominee Mitt Romney co-founded and was CEO of until 1999, is planning on outsourcing 150 full-time positions to China.

Many workers at the Sensata Technologies plant—along with community organizers, religious leaders and labor leaders from around the state—have began speaking out, urging the company to reconsider.

“This area is hurting already,” George Benson, president of the Freeport chapter of the NAACP, said. “The unemployment rate is already above the state average. This is just a move by some rich folks to make more money, to become richer. They are sending these experienced workers’ jobs overseas just for money. They just keep lining their pockets. This just isn’t in Freeport, this is all over. We have to stand against it. It’s a big fight. But it’s an important fight worth being in.”

The employees—who manufacture sensors that are sold to auto manufactures—were told in early 2011 that the plant would be closing in December 2012. They are currently training their Chinese replacements, who have been flown in by Bain to the Illinois plant. “This just adds insult to injury,” said Cheryl Randecker, a Sensata employee. “They’re going to be here three months and they’re not going to leave knowing everything they need to know.”

Last week, workers from the Sensata plant staged a protest outside of the plant against the outsourcing. Many of the workers also staged a protest on June 18 where they urged Romney, who was in nearby Wisconsin, to come to Freeport and learn how the outsourcing would adversely affect the community. Workers from the plant are currently writing Romney a letter in which they ask him to intervene and stop the outsourcing of their jobs. The workers are planning an action for July 8 that will take place at the plant. No further mention of what the action would entail was mentioned, but the workers have requested that multiple labor and community coalitions from around the state come in solidarity.

Though Rommey hasn’t worked for Bain in more than a decade, the workers and their supporters say that he still is making money from the private equity firm that is outsourcing the Sensata jobs.

“We’ve seen how destructive outsourcing is to communities,” Carl Rosen, president of the western region of the United Electric union, said in a conference call. “When corporations pick up and leave they leave areas like Freeport hurting. When the jobs end up in China, often times the workers there are exploited very badly. It (outsourcing) is a race to the bottom. Romney says he wants to save small town America, but yet a company he helped found is destroying a small town in America and he’s going to make money off of it. These workers and their families are being dropped on the street so Bain Capital and Romney can make a few more dollars.”

Randecker, an employee of Sensata for 33 years and one of the key organizers against the outsourcing, said her life has been turned upside down.

“Everything has changed,” Randecker said. “I’m five months away from unemployment. I’m a single parent with a daughter. I don’t worry about myself as much as I do her now. I was able to send her to a good four-year university because I had a good job. After I found out I was going to lose my job, I had to tell her I couldn’t afford to pay for her school anymore. She had to move back home and enroll in a community college in Freeport because I wasn’t going to be able to afford her school without my job.”

According to the employees and community organizers speaking during the conference call, Sensata reported $2 billion net revenue last year. “How can they make so much money, and still want to cut costs by outsourcing jobs like the ones in Freeport?” Rosen asks.