Is Union Busting to Blame for Power Outages in D.C.? 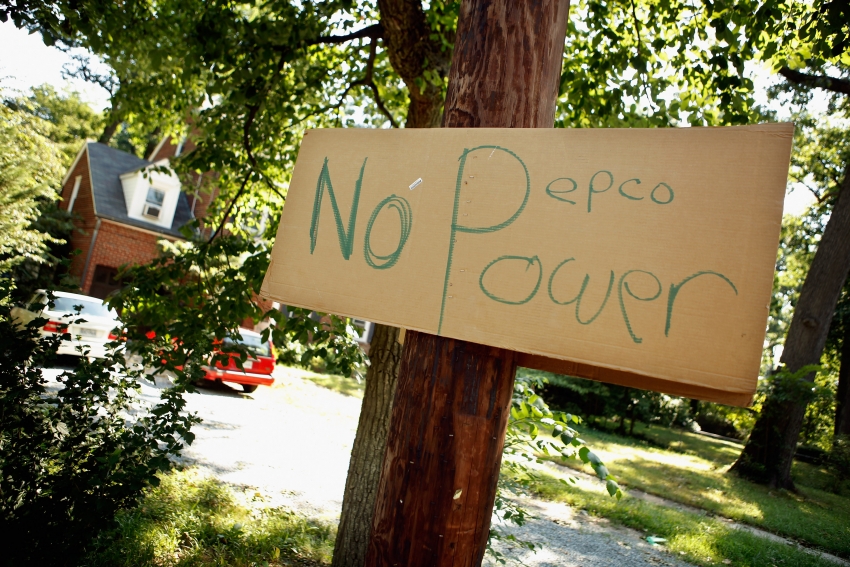 A hand-written sign about local power company Pepco hangs on a pole in a residential neighborhood July 2, 2012 in Silver Spring, Maryland. (Photo by Chip Somodevilla/Getty Images)

Yesterday, 15,091 Washington, D.C.-area residents were without power for the sixth day in a row, according to utility company Pepco spokesman Marcus Beal. As D.C. residents face record heat waves, many are upset and attribute the lack of power to incompetence on Pepco's end. However, International Brotherhood of Electrical Workers (IBEW) Local 1900 members claim the failure to restore power outages is due to chronic understaffing and Pepco’s shift from hiring union utility workers to non-union temporary contractors.

“We have half the linemen we had 15 years ago,” says IBEW Local 1900 Business Agent Jim Griffin, whose union represents 1,150 Pepco workers. “We have been complaining for a very long time. They have relied for a long time on contractors. They are transients, they don’t know our system, and we typically have to go behind them to fix their mistakes. It’s very frustrating. We take ownership in our work, we make careers out of this.”

Griffin says that starting 15 years ago, Pepco stopped hiring workers to replace retiring electrical workers and offered incentive-laden buyout deals to get electricians to retire. In order to address understaffing problems, Pepco has at times hired non-union temporary contractors, instead of hiring new workers. Griffin estimates that Pepco currently employs 1,150 union workers and approximately 400 non-union contractors. The understaffing has led to problems that the IBEW warned about years ago.

"Everything is keyed on dollars and cents profit," warned IBEW Utility Director Jim Hunter back in 2005. "Storm outages are longer, and utilities are asking for more and more help from other utilities. The problem is that other companies are in the same boat. And they are still not hiring."

Despite having a negative -57% tax rate from 2008 to 2010 and making nearly $822 million in profits during that period, Pepco has not hired a sufficient number of electricians to properly maintain the system. Griffin claims the insufficient number of linemen causes Pepco's system to go out more often not just during storms, but on hot summer days when electrical grids are maxed out from air conditioners and fans. When big storms do hit and knock down the system, PEPCO hires outside contractors from far-away states to help in repairs.

“When we have a major storm like this we rely heavily on assistance from other utilities. We have crews coming from Quebec and Oklahoma,” says Griffin. “If we had more linemen we wouldn't have to wait three days for some of these crews to arrive. These extended power outages have to do with number of workers Pepco has on their payroll.”

Griffin says the understaffing is a “philosophical move” by the company. “It was easier to deal with the contractors than the employees. They can fire them at a moment’s notice.  Contractors don't get paid very well and they come and they go,” says Griffin. “The problem becomes the quality of work. We have story after story of us coming out after contractors and fixing their work.”

Pepco's profit-maximizing behavior has led not only to diminishing quality of service for its customers, but also a diminishing quality of life for its employees. Unionized Pepco workers had their contract expire on May 31 and are currently working on their second contract extension as the union refuses to agree to concessions. In ongoing negotiations with the union, Pepco has demanded the unilateral power to make changes to the health and benefit packages of union workers mid-contract. (The union suspended its contract negotiations so that members of the bargaining committee could go into the field to help restore power to D.C. residents).

When asked if its labor relations contributed to the extended power outages, Pepco spokesman Beal said, "We are in negotiations for a new labor agreement with Local 1900 IBEW. We expect to ultimately reach an agreement with the union, but we won’t negotiate this in public.”

For his part, Griffin hopes the outages might help get the public on the union’s side.

“This storm could change the whole dynamics of these negotiations and I think there is a potential to change staffing issues,” says Griffin. “This has been such a major, major disaster for our electric system. It’s been a traumatic week for our customers.”