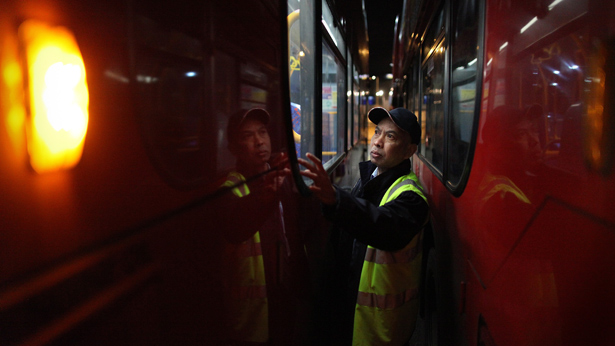 A nightshift bus driver checks his bus before his route. A year and a half ago, the Amalgamated Transit Union began shifting resources into organizing coalitions with transit riders to support public transit.   (Photo by Peter Macdiarmid/Getty Images)

Following labor’s loss in Wisconsin’s recall, the leader of the nation's largest transit union says building coalitions with riders, not organizing more drivers, is the top priority for his union’s future.  Interviewed at last month’s Netroots Nation conference, Amalgamated Transit Union President Larry Hanley said that Wisconsinites’ willingness to keep their union-busting governor in office demonstrates the urgent need to change the relationship between public workers and the American public.  “No matter how much money we put into electoral politics,” said Hanley, “if we can’t change the attitudes of people…we’ll lose.  It’s just a matter of when and how hard.”

“I think Wisconsin shows,” says Hanley, “that at this moment in time, the right wing and the billionaires who support them have been successful in convincing a significant minority of working people that their interests are tied to falling wages in the public sector.”  Hanley adds that Walker’s re-election demonstrates politicians’ success in framing unions as a “special interest,” and “saying there are working people, and then there’s organized labor.”  Hanley noted he was particularly surprised by polls showing a substantial minority of union households backing Walker.  “We have to – starting with our own members – make sure that people understand that we’re all in this together, we’re not all in this alone…it’s going to be a long process.”

ATU represents over 190,000 workers in the US and Canada.  The majority are public workers, although the majority of ATU’s contracts are with private companies like Greyhound.  A year and a half ago, ATU began shifting resources into organizing coalitions with transit riders to support public transit.  With the policy resource center Good Jobs First, ATU has held two rider organizing “boot camps” for activists and union leaders from 95 cities.  Last month, those efforts entered a new phase with the launch of Americans for Transit, a new national organization backed by ATU and GJF.  Hanley chairs Americans for Transit’s Board; GJF Executive Director Greg LeRoy is its secretary-treasurer.  They tapped Andrew Austin, the former field director of Washington State’s Transportation Choices Coalition, as the organization’s founding executive director.

Austin highlights his group’s success in getting a King County, WA Republican councilmember to back a tax increase in order to stave off a 20% service cut.  He says aggressive turnout efforts, including leafleting on buses, paid off when riders formed a line “almost a mile out the door” to attend the first hearing on the issue. “The story in all the major media switched from about King County Council wants to raise your $20 car tabs to pissed-off bus riders angry about losing service…the story never went back.”

While some major cities have well-established permanent riders’ organizations, Austin says in “a lot of places there’s just no sustained effort.”  Unlike bike riders, Austin says that for most bus riders, “it’s just what they do…they don’t identify themselves as that, so that’s one of the challenges.”  Austin adds that, “The transit union can’t succeed if there’s not a grassroots movement for transit and transit riders and transit advocates across the country...Most riders are working class or poor people, so I think there’s a natural solidarity there.”  But he says absent organizing, anecdotes about outrageous union benefits can still get traction.

The context is austerity.  ATU and GJF note that in the recession, ridership has reached its highest level in decades, just as 85% of transit agencies have raised fares, cut service, or borrowed money.  Hanley sees a dual threat: proposals to balance budgets by slashing service, and calls to cut workers’ benefits so service can be saved.  Hanley says local politicians “create a fiction in which only the people who depend upon the service and the people who depend upon the service for jobs are the players, and they take out all the other taxpayers from the discussion.”  As Mike Elk reported, among the budget alternatives pushed by ATU and its allies is a call for banks to renegotiate interest rate swaps deals signed with cities early in the financial crisis.

Hanley charges that in order to "cleave the working class,"  Chicago Mayor Rahm Emanuel “lied” about the drivers’ union contract, portraying the ten minutes provided for drivers to inspect their vehicles at the beginning of their shifts as an indulgent paid “coffee break.”  He says Emanuel’s willingness to mislead the public shows that the “very powerful” see the importance of allying themselves with transit riders, and his union has to do the same.

Hanley says that with “about 100 riders for every member” of ATU, the union needs “to get, first of all, our members talking to the riders in a more political sense than they have been.  I mean everyone says good morning and good night, but there’s not much more going on in most places.”

If the coalition effort is successful, says Hanley, raising transit fares will eventually become politically dangerous in the same way that raising taxes is today.  Attempts to cut service will be met by “an organized lobby screaming and saying we need better transit. Don’t build the bridge to nowhere—build the bus to someplace.”  He adds, “we want our pastors to see us as allies, and we know when that happens, then people like Rahm can’t come in and say, ‘Oh, they make too much money.’”

ATU’s new focus comes with a cost: a shift of resources away from organizing more drivers—public sector or private—into the union.  While ATU has continued to do some new worker organizing, Hanley says, “I could go out and organize 100,000 people and spend a fortune trying to get them contracts, but what am I doing to change the overall picture by doing that?  Not enough…we’re on a trajectory that has to be turned around too quickly.”

Hanley argues that the US labor movement has been too slow in responding to intensifying threats, and too quick to offer concessions: “My view is you’re feeding jelly beans to the bear, because at some point, you’re going to say no, I’m not going to feed the bear anymore—I ran out of jelly beans.  And then you’re going to have a fight.  So the question is when do you have the fight?” That said, notes Hanley, “sometimes you do make concessions, you have to.”

Hanley says conservatives have been successful at isolating public workers by “promoting jealousy over unity” and exploiting “racial messages…just like Ronald Reagan, ‘welfare queens.’”  The subtext, says Hanley, is “those are benefits for other people, not for us.”  But he draws hope from recent local referenda in which voters have chosen to raise their taxes in order to fund transit—including in Wisconsin.

Hanley contrasts the current atmosphere of resentment with the attitudes he saw on September 11, 2011: “It was like the first time in my whole career where I thought that average people really understood the value of government services, and the fact that when the bell rings, our guys are the ones that go in. And the idea that a few years later, there’s this sweeping attack, saying the people who did that aren’t entitled to pensions, aren’t entitled to healthcare, make too much money, it’s just amazing to me.  It’s [an] amazing turnaround in the public framing of how our society works.”