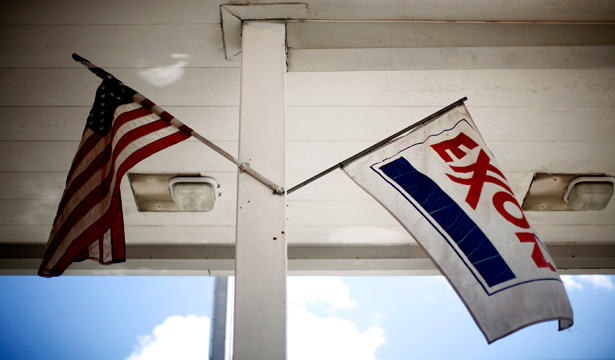 Hundreds of Houston janitors have been on strike since Tuesday. Employed by little-known contractors to clean the offices of big name companies, including Exxon Mobile, Shell Oil, and JP Morgan Chase, these members of the Service Employees International Union (SEIU) struck nine buildings Tuesday night, and nine more Thursday night. SEIU, which represents 3,200 Houston janitors, says it expects the strike to escalate further.

“The first reason I went on strike is because I wanted to fight for my rights and to stop the intimidation against me and my co-workers,” says Maria Lopez, a janitor for the contractor ABM.

Houston workers won union recognition as part of SEIU’s national Justice for Janitors campaign in 2005. Given that the janitors’ direct employers were numerous and largely anonymous, that campaign’s success rested in part on the use of worker activism and community coalitions to put pressure on the wealthy companies that owned the buildings, determined the economics of the positions and were more susceptible to public pressure. Houston workers went on strike to win their first contract in 2006; they settled without a strike in 2009.

SEIU says that management abandoned negotiations when the current union contract, which covers 3,200 janitors, expired on May 31. Janitors voted on June 1 to authorize strikes. Prior to the indefinite strikes that began last week, groups of janitors held a series of one-day strikes last month. At least one contractor, Pritchard, refused to let workers who struck return to work.

In the current contract fight, as in previous battles, SEIU sees the building owners, not the contractors, as the players who will actually decide when to sign a deal with the union. “The contractors, they’re the middlemen,” says SEIU Local 1 Texas State Director Elsa Caballero. “Ultimately, they will do whatever the building owners are going to tell them to do.” History suggests that workers’ leverage with these firms may rest less on their ability to disrupt janitorial work than on their ability, through the strike, to publicly shame the companies.

SEIU is filing charges against contractors with the National Labor Relations Board (NLRB), alleging they illegally imposed unilateral changes on workers. According to SEIU, three contractors broke the law by ceasing contributing to the health and welfare fund, and two others ceased withholding workers’ contributions. When union contracts expire, by default their “terms and conditions” remain in effect until a new contract is negotiated. (Under some circumstances, management has the right to put into effect its final offer, but not to pick and choose provisions to change.) SEIU charges that these changes, enacted against workers who were not on strike, were designed to intimidate workers into accepting management’s offer.

SEIU’s charges are of particular significance because U.S. labor law provides greater protection for workers who go on strike in response to “unfair labor practices” by management than for those who strike to improve their wages and benefits. Employers face more limitation in permanently replacing workers during a "ULP strike" than they would otherwise. Caballero says they show that contractors “don’t want to see workers raise their voices or demand respect in their jobs.”

Poverty in the Millionaires' City

“Here in Houston," said Lopez, "the rich are getting richer and the poor are getting poorer…We want to make a change. We want to have the possibility for the middle class to reappear, because right now there is no middle class.”

SEIU notes that Houston leads the nation in annual growth of millionaires, while one in five Houston workers makes less than $10 per hour. According to the union, Houston’s 15 largest employers brought in over $178 billion in profit last year, while union janitors, mostly working part-time schedules, are paid below $9,000 annually. Caballero says that workers are "trying to bring awareness to the two sides of the city: the millionaires' city, and the city that we all know, that our members know."

Rita Soto, whose employer, Pritchard, refused to let her return to work after striking last month, says the strike has taken a toll: “It’s difficult, because everything gets out of balance with our family and our expenses.” (Lopez and Soto were both interviewed in Spanish). Soto says winning a good raise would mean more time with her family, and the resources to provide her children with a chance for “a career, so they wouldn’t have to struggle as much as I have.”

Asked why, after two union contracts, janitors’ wages iare now just over a dollar above the federal minimum, Caballero said, “It definitely should be a lot higher. But you have to remember, janitors started at $20 a day…in their second contract, they pushed it as far as they could, to the point where they felt comfortable” signing a deal. She notes that the real estate market is much stronger now than it was in 2009, and says janitors “have been very reasonable, and willing to move at a slower pace as long as there’s [a] move forward…right now they’re nowhere near where they need to be.”  Poverty persists, says Caballero, because "the building owners and the contractors think they can get away with paying so little."

Lopez and Soto both work five days a week. Each day, Lopez cleans one floor, including 100 toilets and urinals. Soto cleans two floors daily, including 11 elevators and 6 kitchens. “The big companies like Shell and Chevron, they want to wash their hands of this,” says Lopez. “They should intervene. They have the obligation to the workers because we are cleaning the offices for their big buildings.”

The two sides are far apart on wages, with SEIU proposing to increase the current hourly rate from $8.35 to $10 over the life of the contract. The contractors’ “last, best and final offer” proposes an increase totaling 50 cents over the next four years. Tim Reily, lead negotiator for the Houston Area Contractors Association, told the Houston Chronicle last month that, “Despite the ongoing economic challenges, the union’s proposal was simply unrealistically high.” (Contractors did not respond to requests for comment.)

“You may see city after city begin to honor picket lines,” said Caballero. In some cities, SEIU janitors employed by some of the same companies have “conscience clauses” in their contracts, protecting their rise to honor picket lines by refusing work. That means that if a striking Houston worker traveled to such a city and began picketing the same company there, the workers inside could walk off the job, effectively spreading the strike throughout the country. Caballero mentioned New York, California and Illinois as states where the strike could spread. As I’ve reported, this tactic has repeatedly been put to use by the Teamsters in disputes with the sanitation company Republic Services.

SEIU has been working to secure broad support and broad attention to the workers’ struggle. Last month, during JP Morgan Chase CEO Jamie Dimon’s visit to Congress, janitor Adriana Vasquez confronted him and asked, "Despite making billions last year, why do you deny the people cleaning your buildings a living wage?" Clergy and workers held an interfaith service to pray for economic justice. A delegation of workers employed by contractor ISS visited from Spain, the Netherlands and Denmark.

After protesters allegedly were trampled by police horses at a June 14 demonstration,  Rep. Sheila Jackson Lee (D-Texas) and actor Danny Glover announced only July 1 the formation of a commission on the free speech rights of Houston’s janitors.  On July 6, community groups, MoveOn and a state representative joined janitors for a march to Pennzoil Place (Pennzoil is a division of Shell Oil). Soto said such support “makes me feel stronger, and more willing to continue the fight.”

On Friday, janitors demonstrated outside luncheons for the Commercial Real Estate Network and the Ghanian Vice President, and held a candlelight march through Houston’s wealthy River Oaks neighborhood. On Saturday, they brought their kids to march and write postcards to building owners. During last week’s NAACP convention, striking workers addressed the crowd and met privately with Vice President Joe Biden. Soto said that after meeting Biden, “I was very happy, because he told me that he knew that we could win.” Asked what she’d like Biden or President Barack Obama to do, Soto said, “I would like for them to call up the big companies and talk to them in a human way, tell them that we are making the city of Houston beautiful, working every night so their buildings can be clean.”

“I feel that all of us here as workers have taken an important role,” Lopez says. “Because now they know that if we don’t clean their big buildings, they will fall. We are strong.”