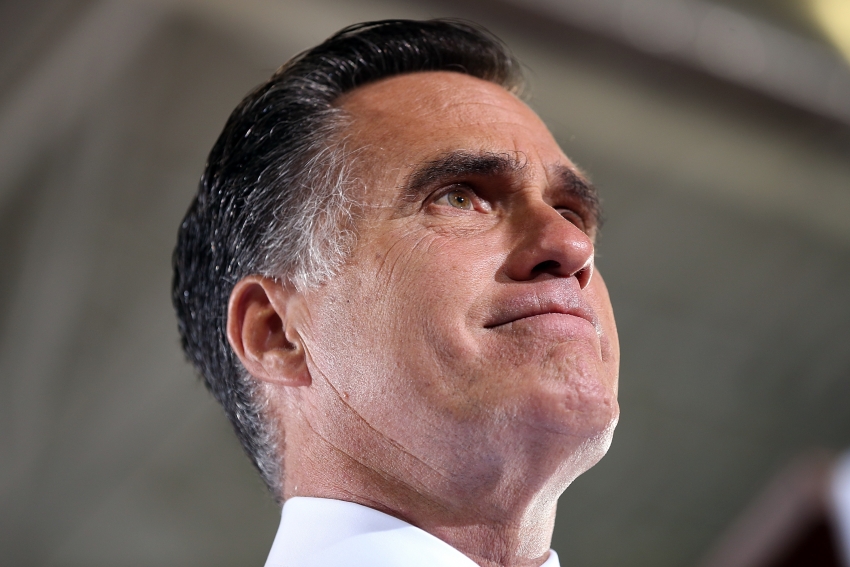 Mitt Romney has been dogged by questions about his tenure at Bain Capital from 1999-2002, during which time Bain closed a GS Technologies steel plant.   (Photo by Win McNamee/Getty Images)

“We didn't know who the hell Mitt Romney was when all that stuff started," says former GS Technologies steelworker Donnie Box of Kansas City, Missouri. "It wasn't until later we found out who Romney was. We just knew he was just another guy with money. It wasn't until his boys came and started gutting the place that we found out he was an asshole.”

The media has lavished much attention lately on whether Republican presidential candidate Mitt Romney was in charge of Bain Capital from 1999 to 2002, largely because Bain closed the steel plant where Donnie Box worked in 2001. However, there has been little coverage of workers like Box who forced the issue of plant closings into the media. While many prominent Democrats such as former President Bill Clinton, former Pennsylvania Governor Ed Rendell, and Newark Mayor Cory Booker have expressed misgivings over attacks on Romney's tenure at Bain Capital, organized labor, and the United Steelworkers union in particular, has led the way in pushing these attacks.

For nearly the past year, the United Steelworkers have been attacking Romney’s record at Bain Capital, citing the experience of their former members who were negatively affected during Romney’s tenure there. The sympathy these laid off Steelworkers generated in the media eventually led to Democrats such as President Barack Obama picking up the attacks, despite the misgiving of major party figures like Bill Clinton.

The United Steelworkers' initial accusations regarding the GS Technologies plant closing have proven explosive enough to potentially derail Romney’s presidential bid. Their effectiveness also suggests labor's new strategy of doing its own political actions separate from the Democratic Party is starting to pay off.

“I think we are encouraged that the Obama campaign has stood steadfast on behalf of the simple and true message that there are serious questions on Romney's record as an outsourcer,” says AFL-CIO Political Communications Lead Jeff Hauser. “Those were significant people in Clinton and Rendell who pushed back and the president stood his ground and that was encouraging.”

The scandal exploded after the Obama campaign followed up on the Steelworkers' previous attacks on Bain, releasing an ad calling out Romney for his role in the layoffs that occurred at Bain Capital’s GS Technologies steel plant in 2001. In response, Romney told conservative radio host Ed Morrissey that he had left Bain Capital to run the Olympics in 1999, years before the plant closed. But a series of SEC documents signed by Romney from 1999 to 2002 state that Romney was “sole stockholder, Chairman of the Board, Chief Executive Officer and President” of Bain Capital until 2002.

Romney has denied that he played any managerial role whatsoever during that time period, claiming that he was merely a figurehead. However, a press release issued by Bain Capital in 1999 stated, “Romney said he will stay on as a part-timer with Bain, providing input on investment and key personnel decisions. But he will leave running day-to-day operations to Bain's executive committee.”

For Donnie Box, it doesn’t matter whether Romney had a direct day-to-day managerial role when Bain Capital closed his plant. Box feels Romney was still in a position to change things and that Romney had no problem profiting from his suffering. And Box notes that it was the actions Bain took before 1999, when Romney was indisputably head of the company, that led to the plant closing.

“There is no doubt in my mind when he came in with Bain Capital, he was the President and CEO of that corporation," Box says. "He was responsible for the people who came in there and started loading up on debt. They knew with that much debt that there was no way that the place could survive.”

The scandal has led to a serious credibility problem for Romney among working-class voters. But being disillusioned by Romney is one thing; voting for Obama is another. And Box, for one, says he won't be doing the latter.

Despite appearing in a controversial ad for the pro-Obama Super PAC Priorities USA, denouncing Romney's role in the GS Technologies plant closing, Box, a lifelong Democrat, says he won’t be voting for the first time since 1971 because he has lost faith in politicians.

“I could really care less about Obama," says Box. "I think Obama is a jerk, a pantywaist, a lightweight, a blowhard. He hasn't done a goddamn thing that he said he would do. When he had a Democratic Senate and Democratic Congress, he didn't do a damn thing. He doesn't have the guts to say what’s on his mind.”

Box’s refusal to vote for Obama shows the challenges that organized labor faces in convincing its members to vote for Democrats. Many union members like Box feel the party hasn’t pushed hard enough for jobs bills or labor law reform while making sure to pass trade pacts, like the South Korea Free Trade Agreement, which the AFL-CIO and the United Steelworkers opposed.

Other workers negatively affected by Bain Capital disagree with the mentality of workers like Donnie Box. Randy Johnson, who lost his job when Ampad, an office supply company which was then controlled by Bain Capital, closed his plant in Marion, Indiana, in 1995, says he will be voting for Obama.

“We all want things to go faster, we want instant gratification," says Johnson. "I feel like he has done the right things for the economy. I think if the economy starts growing, we will be talking about insourcing of jobs. Personally, I try to compare Romney to the president. Obama sticks up for jobs and what we do in the labor movement and Mitt Romney just sticks it to you. I just don't see how Romney has done anything to help the average American person out there.”

The AFL-CIO hopes voices like Johnson's are more persuasive to their members than disaffected workers like Box. The AFL-CIO says it is well aware of the challenges that it will have in persuading union members and feels up to the challenge of winning over union members like Donnie Box who lack enthusiasm for President Obama.

“Obviously, President Obama has to win votes," says Hauser. "The AFL-CIO has endorsed Obama and we are going to educate about President Obama's record and vision and how it contrasts with Romney’s record and vision. It’s clear Obama’s record lines up much better with the preferences of union members. I think there are going to be challenges when you have a ton of corporate money and the forces of cynicism. In a rough economy, people can get disillusioned.”