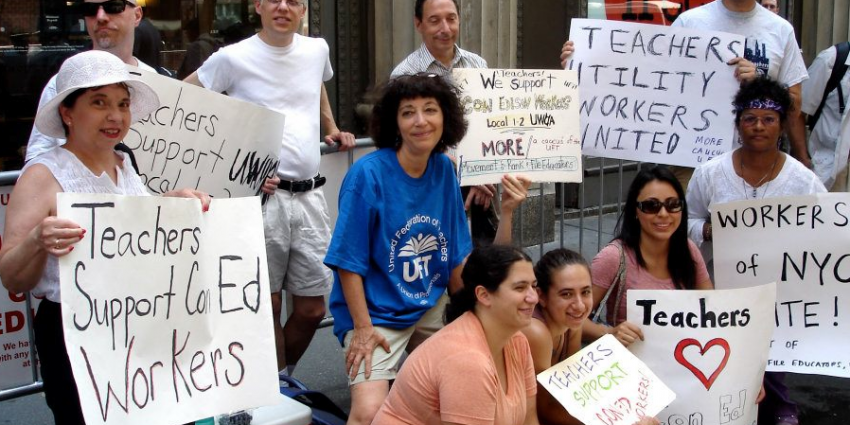 Members of New York's Movement of Rank-and-File Educators (MORE) turned out to support striking Con Ed workers in early July. Founded this year, MORE plans to challenge the reign of the Unity caucus in next year's union elections.   (Photo via Facebook)

“You’ve got to stop thinking about education as a monopoly,” says former New York City education Chancellor Joel Klein in the documentary, The Inconvenient Truth behind Waiting for Superman. Klein’s anti-monopoly stance—based on a portfolio model of education that runs on school turnarounds and choice—goes hand-in-hand with the monopoly that he and his successors under Mayor Michael Bloomberg have had over school reform in the country’s largest urban district since the instatement of mayoral control in 2001. In the last decade, the Bloomberg administration has closed 140 schools and opened 589 new ones, many of which are privately operated “small schools” that directly replace neighborhood schools.

The Unity Caucus of New York’s United Federation of Teachers (UFT) also runs a monopoly—or so dissident caucuses have argued over the course of Unity’s unchecked reign since the UFT’s founding in 1960. The newest opposition is the Movement of Rank-and-File Educators (MORE), which was founded this year and will vie for union leadership in next year’s elections.

In February, MORE leaders hosted a conference attended by more than 200 teachers with workshops on union history, chapter leadership, and broader issues like high-stakes testing and school funding. After a founding meeting with 70 teachers and allies in March, the caucus settled on a name and a mission statement.

MORE’s opposition to Unity leadership covers a range of issues: the incumbents’ support for mayoral control under Randi Weingarten in 2001 and again (though less stridently) under current President Michael Mulgrew in 2009; its agreement to merit pay in 2005; and a “weak stand” on school closings, charters, co-locations, class-size reduction and testing.

Rank-and-file dissidence in the UFT is as old as Unity’s incumbency. New Action was the primary opposition caucus for two decades until 2003, when it reached a détente with Weingarten that effectively killed its militancy. Two newer caucuses—the Independent Community of Educators (ICE) and Teachers for a Just Contract (TJC)—filled the void. Both represented different elements within the UFT: ICE members were older and predominantly white; TJC was younger and more focused on direct action.

In 2005, ICE and TJC combined forces in response to that year’s contract, which instituted merit pay and absentee teachers reserves, or ATRs. Before 2005, teachers who were laid off due to school closings were slotted by the city’s Department of Education into vacancies in other schools. With the new contract, teachers lost seniority placement rights and had to apply for new jobs while remaining on the DOE’s payroll. Despite widespread outcry from teachers, the ICE-TJC opposition still lost the 2007 and 2010 union elections by large margins.

This year, UFT leaders signed onto a new evaluation system requiring 40% of teacher ratings to be based on local or state student tests. The union was under pressure from officials to agree to a greater role for high-stakes testing in order to restore $58 million in federal Race to the Top funding.

MORE has taken an unconditional stand against testing, joining hundreds of other organizations nationwide in signing the National Resolution on High-Stakes Testing. In order to reverse corporate reform—a tall order given federal pressures and the city’s determination to shed its schools’ workforces—the caucus envisions a new unionism based on member organizing and wide-scale community partnership.

“Right now the majority of members who get angry respond by tuning the union out,” says Kit Wainer, a former TJC member who has been teaching for 24 years. “That’s the problem that we’re struggling against. Through education, through organizing our own actions, hopefully we can change it.”

Unlike previous caucuses, MORE is an alliance of dissident teachers and teacher-community groups. It includes the Grassroots Education Movement (GEM), which runs forums and protests around school turnarounds and has attended virtually every city turnaround hearing since its formation in 2005, and the New York Collective of Radical Educators (NYCoRE), which organizes around social justice principles through meetings, peer-led conferences, and inquiry-to-action study groups.

“Part of the work of transforming the UFT is not to be a union all about bargaining but also a union that promotes a discussion of pedagogy that’s richer and appeals to community,” says Sally Lee, a former elementary school teacher and now the executive director of Teachers Unite, a non-profit that has run organizing trainers for teachers and is currently collaborating with the Urban Youth Collective on “Dignity in Schools,” a campaign for restorative justice to stop the school-to-prison pipeline.

“It can be about the disappearance of black and Latino educators,” adds Rosie Frascella, a leader of NYCoRE’s “NYQueer” campaign for queer justice and a former organizer with SEIU who compares her experience with SEIU’s “top-down” unionism to the UFT. “It can be fighting stop-and-frisk policy. It can be about huge questions of poverty and housing and healthcare.”

Unity incumbents do have their own community partnerships and strategies to buffer school turnarounds. Together with the Bronx’s Community Collaborative to Improve District 9 Schools, the union started the Lead Teacher Program in 2004 to attract teachers to the district and cultivate peer support. The Coalition for Educational Justice, a citywide composite of community groups, has fought alongside the union to preserve free student MetroCards and school dollars in the city’s budget.

Last month, the union won its suit against the city for turning around 24 schools under the pretense of replacing them with “new schools,” but really, as the union argued, as a maneuver to remove half their staffs. MORE has come out against this legal strategy. “Even if the lawsuits succeed,” a May pamphlet read, “they will merely delay the closings and leave our members in schools with shrinking enrollment, worried for their futures, and no better organized to fight back than they were a year ago.”

MORE’s vision is to expand on the community outreach of its affiliate groups and build member power through direct organizing. Thus far, internal capacity building has taken the form of electing chapter leaders—which, in many schools, are merely appointed by the principal and functionally non-existent—and bolstering existing pockets of support. This focus on organizing, while yet to assume full shape, takes after the work of the Caucus of Rank-and-File Educators (CORE) in Chicago, which currently leads the Chicago Teachers Union (CTU).

“In terms of political and social orientation I think we have a lot in common with CORE,” Wainer says, “turning a union into a force to fight for members’ rights and also allying with larger forces to fight for quality schools.”

MORE’s connection with Chicago goes beyond vision. NYCoRE is a close ally of its Chicago equivalent, Teachers for Social Justice, an active force in the CORE-led CTU. Leaders from MORE and CORE have built relationships through a variety of meetings, including an international teacher conference that CORE hosted last summer and a presentation that CORE leaders gave at Columbia’s Teachers College in 2010.

MORE is sober about its challenges in replicating CORE’s efforts—winning union leadership and shifting discourse and policy in the city.

“The election next year is going to be a massive operation on our part,” says Sam Coleman, a seventh-year dual-language teacher. “We have more people than any of the opposition groups have ever had, because we’ve pulled so many groups together. Our work is still finding those people who are willing to do extra work.”

The vastness of New York’s school system, along with the coverage of Unity leadership and loyalty from retiree voters, poses a major uphill battle for any opposition caucus. MORE has almost no representation in Staten Island and in large parts of Queens, Brooklyn and the Bronx. By contrast, the incumbents uprooted by CORE in Chicago had only been in office for six years and lacked anything remotely resembling Unity’s electoral machine in New York. What’s more, the writing had been on the wall in Chicago for longer—mayoral control was granted by Republican state legislators in 1995, and had been followed by a string of charter-happy public school CEOs, including Arne Duncan.

“There was much more of a sense among Chicago teachers that their careers were on the line,” says Wainer. “We have no choice but to engage in patient organizing, which may take a long time. On the other hand, there could be an explosion of activity if the climate changes.”