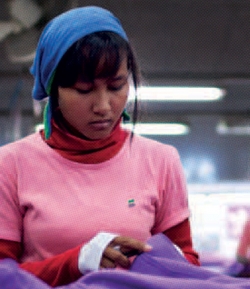 Let the games begin. London has been buzzing with Olympic fever and its attendant political controversies, from the scandalized security apparatus surrounding the event to the sidelining of local working-class communities to make room for the sporting bonanza. But the biggest abuse of power takes place far from the podium: the exploitation of factory workers, who pour their sweat into the Olympic brand long before any sports star dons the logo on the field.

While there was a furor in Washington over Chinese-made Team USA uniforms, the debate over the use of offshored manufacturing labor to make Olympic apparel is just the tip of larger trend of abuse in multinational supply chains. Labor activists with the Playfair 2012 campaign have seized the Olympic arena as a platform to spotlight how labor gets cheated around the world. As we reported earlier this year, the group has for years pressured Olympic organizers to uphold fair labor standards in the sourcing of paraphernalia like sportswear and those adorable stuffed mascots. Those items may seem trivial, but the games are in large part a commercially-driven enterprise, and the corporations that source these knick-knacks in Indonesia, China and other parts of Asia are representative of an international supply chain rife with sweatshops, child labor and union-busting. (We also recently reported on a parallel campaign around Rio Tinto's ties to Olympic medals and dirty labor practices.)

A follow-up report issued by the campaign in May detailed harsh conditions in Olympic-supplier factories in China, Sri Lanka and the Philippines. The investigation highlighted abysmal wages, suppression of worker organizing, and poor housing:

One surveyed worker at a Philippines factory explained the lesson management drilled into new hires at orientation: “They said that union is not allowed in the company, as there is no need for a union anyway.”

Playfair has demanded that the suppliers of Olympic-brand goods adhere to standards for non-discrimination in employment, prohibition of child labor, and decent wages. Though these standards are notoriously difficult to enforce, the organizers and brand names of the 2012 games have committed, at least on paper, to helping protect workers and prevent abuses in their supply chains.

Playfair’s July progress report noted that the London organizing committee did commit to some of the key principles the group proposed:

Last year Playfair scored a breakthrough by compelling major Olympic sportswear suppliers Adidas, Nike, Puma, Pentland (Speedo), New Balance and Asics to sign on to a protocol to protect workers’ rights to freedom of association in Indonesia. So far, though, the campaign has also reported on lackluster performance by multinational brands in adhering to their past promises to uphold workers rights and improve working conditions.

A follow-up investigation by Playfair into labor practices at Adidas, for instance, found that  “Despite being committed to a living wage through sourcing agreements with the London Games Organisers LOCOG, [A]didas continues to refuse to implement the payment of a living wage to workers producing Olympic sportswear, or any [A]didas goods.”

But the Playfair protocol in Indonesia does seem to be edging toward positive change in some workplaces. According to the campaign, the list of principles, which builds on existing International Labour Organisation standards, aims to ensure direct accountability for multinationals, and is part of a broader process of engagement with civil society actors:

Indonesian unions KASBI, SPN, Garteks, TSK and GSBI have played a leading role in the protocol negotiations. These unions collectively represent more than half a million workers of whom 70% are women. The negotiation process was supported by a number of local and international NGOs including Jakarta Legal Aid Institute, the Play Fair Alliance and Oxfam.

The Olympic games is a fitting arena for a labor struggle that transcends borders. Transnational labor groups like the newly launched IndustriALL Union and the International Trades Union Confederation, as well as global non-governmental organizations, have been at the helm of the Playfair campaign. Ashling Seely, a representative of IndustriALL, told In These Times:

Trade unions are at the heart of the Play Fair campaign and have been since the campaign began in 2003. … Our core demands on respect for freedom of association and collective bargaining, for living wages to be paid, and for an end to precarious work relationships, are relevant in most countries, and the campaign is built on the principle of solidarity.

Seely added that future campaigns will target the construction and factory labor in the  2014 World Cup and 2016 Olympic games in Brazil.

While Playfair’s pressure campaigns have helped bring labor into the Olympic spotlight, the long-term struggle lasts much longer than the summer sports season. The ultimate goal for the labor movement is to change the rules of the game of global trade, and unions are just getting warmed up.