Going Undercover to Determine the Real Price of Sex 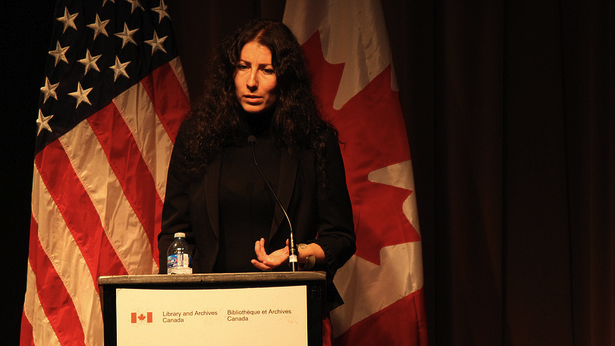 Filmmaker Mimi Chakarova speaks at a screening of her documentary The Price of Sex hosted by the U.S. Embassy in Ottawa last January. (Photo via Flickr )

Jenea often still feels the same way she did when she was being held captive in Turkey and forced to have sex with up to 50 men a day, after having left her small Bulgarian village in hopes of a job abroad.

“It would have been better for me not to be born,” she says. She tried to escape by climbing out a window and down a pipe, but took a serious fall and blacked out. Her captors forced her to continue working even as she was partially paralyzed and unable to feel what was being done to her. Finally they let her call her sister Natalia, who came to get her. But Natalia was told that Jenea still owed $450 for travel and living expenses, and they forced Natalia to work as a prostitute for a month to pay off the debt.

Jenea and Natalia are among the Eastern European women featured in photojournalist and filmmaker Mimi Chakarova’s 2011 documentary The Price of Sex (which is accompanied by an excellent multimedia series available free online). Global sex trafficking has been the subject of many investigative stories, documentaries and reports; it is not a crisis that lacks attention. But still, Chakarova’s work stands out from the other admirable and also not-so-admirable efforts to document this shadowy world.

This is due in part to Chakarova’s personal connection to the issue. She left Bulgaria as a young child with her family, as the economy collapsed with the fall of the Iron Curtain, but she found upon return visits that girls from her own village had ended up disappearing—literally—into trafficking networks. She feels like that fate could easily have been her own. As she said during a recent rebroadcast of a “Snap Judgment” piece on National Public Radio, she was disgusted by sensational media images of trafficked Eastern European women wearing lingerie and heavy makeup because she thought that these images—often shot by men— dehumanized the women and contributed to stereotypes. She pursued her own work on the topic with intense passion, courage and dedication; she even went undercover as a trafficked women, working with complicit men and women she met through survivors’ networks, and in doing so risked actually being “sold” (in which case she figured she might kill herself).

I haven’t actually seen the documentary The Price of Sex, which won several high-profile awards at film festivals last year, but after hearing Chakarova’s radio interview and viewing the lengthy multi-media piece, I felt anyone interested in labor issues should be aware of her work.

Chakarova delves into each woman’s individual story with gently probing and empathetic questions, while also explaining the larger socioeconomic context of the problem, beginning with the simple economic inequities between countries—in this case a direct result of the fall of Communism.

Martin Wyss, chief of Mission International Organization for Migration in Moldova, told her:

It wasn’t just that there wasn’t any money left or infrastructure…there was severe corruption, and these circumstances destroyed the social fabric. Families were ripped apart, alcoholism increased, suicides went up, life expectancies were reduced, migration…created a lot of victims. Many people were left behind, many were left to their own devices. For all intents and purposes there was anarchy…Those who were already weaker would be taken advantage of.

Chakarova notes that most women are recruited by neighbors or acquaintances, or even their own siblings or parents. The recruiters and the women themselves may or may not know the type of work —unpaid slavery, more accurately—that lies in store for them. She says it’s a complicated question, with no simple answer. Wyss adds:

If you make $50 a month and you have a sick mother and the father is dead and the younger brother has to go to school and you are accumulating debts to pay for the treatment of your mother, you have to do something…men start to steal, women may resort to prostitution.

As Ion Vizdoga, an NGO attorney fighting trafficking, told Chakarova in an interview, "When in a village of 2,000 only 50 people have jobs, young people have two choices: Commit crimes to survive, or leave the country and risk being trafficked.”

Sex workers and advocates frequently complain—rightly—that sex workers in general and trafficked women specifically are too often portrayed by media and aid organizations as passive victims. But while Chakarova shows that trafficked women are victimized horrifically by individual men, organized crime groups and larger social and economic systems, she also shows their strength in surviving not only the trafficking, but also the grueling daily life—the experience of being a poor woman in a poor country—that awaits those who do escape.

One of the most heart-breaking aspects of Chakarova’s reporting is the current situation of the women who have escaped trafficking, many of whom find themselves trapped in lives of poverty and deprivation. These survivors are often jobless and suffering permanent health effects, severe psychological trauma and disabilities caused by the trafficking; furthermore, they are often stigmatized by their villages and families. Given the abundance of NGO, governmental and media attention paid to trafficking, one would hope that these women would be offered some economic opportunities and resources after all they’ve been through; the fact they are not reflects the dire economic situation in these countries, especially in rural areas, and illustrates why they continue to be such fertile ground for traffickers even as the horror stories filter out.

Though The Price of Sex focuses on Eastern European women trafficked within Europe and the Middle East, in the accompanying multimedia piece Chakarova also quotes a former FBI agent who notes the responsibility of the U.S. in global trafficking, in terms of both the trafficking that occurs here and the participation of U.S. citizens in sex tourism abroad. That’s not to mention the role of U.S. policy and U.S. corporations in a global economy that is based on low-paid work and migration.

Chakarova also explores the depressing fact that much of the money going to fight trafficking in Eastern Europe gets absorbed by state agencies who then are motivated to make it appear they are exposing trafficking cases; in reality, little or none of the money goes to the rural impoverished villages, either to help alleviate the situations that facilitate trafficking or to aid the victims.