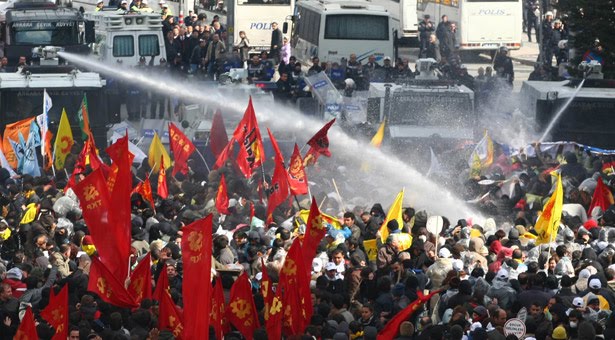 Turkish police use a water cannon to break up a protest by members of the Confederation of Public Service Workers (KESK).   Adam Altan/Getty Images

They had complained about the puny wage increases the Turkish government was offering its public workers. Nor did they like new education laws that they claimed hurt students and teachers. And they had voiced their views about plenty of government polices affecting not just workers.

But early one morning last June when police raided the homes and offices of members of the Confederation of Public Service Workers, (KESK), rounding up 69 union leaders and activists, their arrests had nothing to do with labor-law violations.

They were charged under Turkey’s terror laws with have having links to the Kurdistan Communities Union (KCK), an alleged planning wing of the outlawed Kurdish Workers' Party (PKK). Thousands of Turks have been swept up in arrests aimed at the KCK, according to Turkish newspapers.

In no time Turkish labor groups along with international unions protested the arrests, saying the union members, nearly all of who are Kurdish, have nothing to do with terror. Rather, they say, the government is punishing them for their exercise of free speech as well as their opposition to its policies.

“They are not being investigated for anything related to terrorism,” says Emma Sinclair-Webb, Human Rights Watch’s Turkey representative.

The heart of the problem, Sinclair-Webb says, is Turkey’s anti-terror laws. They are “very broadly drawn,” allowing the government to easily link people to terror groups. “You only have to go to a demonstration,” she says, to be snared in the government’s dragnet.

And as battles with Kurdish militants have grown and tensions increased between the government and Turkey’s Kurdish minorities, Turkish journalists and human rights activist say the government is targeting more and more Kurds whose only crime is their sympathies.

Indeed, Metin Iriz, the labor group’s attorney, says that all but two of the arrested union members are Kurds. Women account for about 20 of those arrested.

“There’s no proof. If there is, they (the government) would tell us,” says Iriz. “They were arrested because of the Kurdish problem…. The government is cleaning up the Kurdish opposition.”

But a Foreign Affairs Ministry official, noting that KESK is an anti-government union, refuted the claim that the union leaders are being wrongly held. He pointed out that a court had rejected appeals for their release from lawyers who had argued there was no concrete evidence. Because documents in the case have not been filled, the official added that the government could not comment about the charges.

Since the arrests, however, six more union members have been arrested and seven released pending the court case, according to Turkish news reports.

KESK is the third-largest federation of public sector labor unions with about 250,000 members, according to Iriz. It represents teachers, nurses, doctors, transportation workers and government employees. Driven by a strong leftist stance, it has often clashed with the right-leaning government and suffered a series of arrests of its members in recent years.

While the Turkish economy has boomed in recent years, Turkish unions have steadily shrunk to about 10 percent of the workforce, according to Turkish journalists and labor experts.  In its latest report on human rights in Turkey, the U.S. State Department noted “government restrictions and interference limited the ability of unions to conduct their activities, including collective bargaining.”

As for the fate of the arrested union leader and activists, attorney Iriz was pessimistic.

“They will wait in jail for two years before their cases come to court and they will get 11 years in prison,” Iriz predicts. “This is Turkey.”

The Pulitzer Center for Crisis Reporting provided support for this reporting.