3 Years Without a Raise: Campaign for Higher Minimum Pay Launches 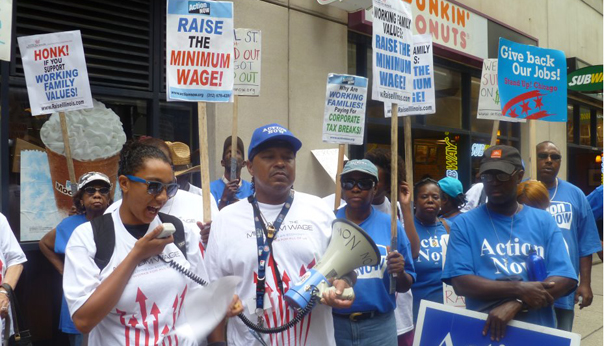 Chanting "We need a raise in the minimum wage," a couple dozen members of Action Now, a low-income community organization, marched last Thursday afternoon around a downtown Chicago outlet of Dunkin' Donuts, one of the nation's leading employers of near-minimum wage workers.

Yesterday, community group leaders joined teachers union members in a news conference and protest outside the offices of a private equity firm partly owned by Penny Pritzker, billionaire heiress and Board of Education member (coincidentally, on the same day a nationwide boycott indirectly targeted Pritzker family-controlled Hyatt Hotels). They presented evidence that raising the wages of parents making the minimum wage would improve their children's performance in school.

The coalition pushing for an increased minimum wage—such as Sen. Tom Harkin's (D-IA) proposal for a boost to $9.80 an hour in three annual increases, followed by annual increases reflecting rises in the cost of living—includes the Service Employees International Union, the National Employment Law Project Action Fund, the AFL-CIO, and other labor, civil rights, women's and progressive groups.

Beyond the issue of basic fairness—a full-time minimum wage worker cannot earn enough to surpass the official poverty line—advocates of raising the minimum argue that such action would boost the economy and create jobs, not "destroy" them, as right-wing critics argue.

An increase in the minimum wage would help 28 million workers and increase the gross domestic product by $25 billion, creating over 100,000 jobs, according to Economic Policy Institute economist David Cooper. The workers who would benefit include both those making less than the proposed new minimum and workers just above the minimum whose rates are set in reference to that standard.  Their increased pay would stimulate the economy and job creation because they tend to spend all that they make.

Even a small increase makes a difference in people's lives and the future of their families. Prince Jackson, for example, is a minimum wage security guard at JFK International Airport in New York.  The proposed increase would raise his pay by $50 a week, half the rent for his basement room in someone's house. "That would help a lot," he says. "It would be wonderful if I could send money to my son in college so he could study more."

The federal minimum wage has not kept up with inflation. To match the buying power of the minimum wage at its peak in 1968, employers would have to pay workers at least $10.55, says the NELP.  It has also not kept up with rising education levels of minimum wage workers, which should boost their pay. Center for Economic and Policy Research economists John Schmitt and Janelle Jones found that the average low-wage worker is about 2.3 years older than her 1979 counterpart (thus more experienced and better educated), the share of minimum wage workers with less than a high school degree has dropped by half, and the share with some college has grown from one-fifth to one-third. Adjusting as best they could for both inflation and education, they figure the 1968 minimum wage would translate into a current minimum of about $11 an hour.

For tipped workers, the federal minimum wage hasn't kept up with anything. It has been frozen at $2.13 an hour for 21 years, the locked-in remnant of a Democratic deal with the National Restaurant Association to reduce their opposition to an earlier minimum wage hike. NELP and other reformers want the federal tipped minimum wage set at 70 percent of the standard minimum.

Minimum wage opponents rely on misperceptions about who employs minimum wage workers and who those workers are. The Right portrays minimum wage workers as teenagers working for frivolous entertainment money at small businesses willing to pay them something as they try to learn the ropes of a workaday world. But a new NELP study found that the majority of low-wage workers—66 percent—hold jobs with big corporations, the top three being Wal-Mart, Yum! Brands (which operates fast food chains like Taco Bell, KFC and Pizza Hut) and McDonald's.

And while the workers' wages have shrunk in buying power for three years, the corporations have recovered: 92 percent of the 50 biggest low-wage employers were profitable last year, three-fourths earning more overall revenue than before the financial crisis, and 63 percent showing higher profit margins. The one-percenters are also doing fine: CEO pay at the top 50 averaged $9.4 million last year.

Jobs in the low-wage sectors—food service; accommodation; retail; arts, entertainment and recreation; and administrative services—have expanded faster than in other sectors and will make up the vast majority of jobs in the near future. And that "teen" working for the big corporation?  As noted, educational achievement has increased, so that 42 percent have attended some college or more, according to Doug Hall, director of the Economic Analysis and Research Network of EPI. Hall also found that 56 percent are white, 54 percent work full-time, and 53 percent are part of families earning less than $40,000 a year. These are families that need and deserve a raise.

A minimum wage increase to $10 an hour, indexed to inflation, makes sense economically, socially, ethically, and even politically. In a poll earlier this year, 73 percent of likely voters supported such an increase. But that doesn't mean Prince Jackson's son can count on help with college from his father just yet.