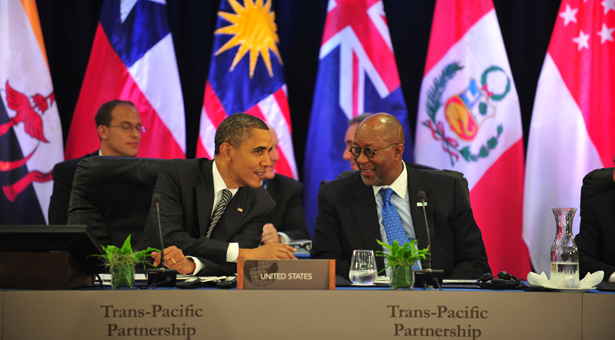 Today in Portland, Ore., for the first time in Barack Obama's presidency, a union plans to picket one of his fundraisers. The 5,000 member-strong Association of Western Pulp and Paper Workers (AWPPW) will picket the luncheon fundraiser because of their disgust with Obama’s handling of the Trans-Pacific Partnership (TPP) free-trade agreement, which they feel will cost them jobs if ratified.

The TPP is currently being negotiated between the United States, Australia, Brunei, Canada, Chile, Malaysia, Mexico, New Zealand, Peru, Singapore and Vietnam. While the terms of the deal are being negotiated in secret, a recent analysis of leaked trade documents led Public Citizen’s Global Trade Watch to declare that the deal would “extend the incentives for U.S. firms to offshore investment and jobs to lower-wage countries.” AWPPW Vice President Greg Pallesen is convinced that, much like previous trade deals, the TPP would be particularly destructive to jobs in the Pacific Northwest.

“It’s really so disappointing with Obama," says Pallesen. "He ran on a promise of change and change with regard to the trade agreements. The last three trade treaties [South Korea, Colombia and Panama] make clear there wasn't that much change. The Trans-Pacific Partnership will be the largest trade treaty ever negotiated. It’s wrong, it’s going to lead to a job loss on the manufacturing side.”

In the midst of an election year, other unions that have endorsed Obama have been far more circumspect in their criticism of the TPP.

“This president has been better on trade than the last several presidents. He has enforced the trade laws better than I think anybody else and done a good job at that,” AFL-CIO President Richard Trumka told Working In These Times earlier this month, in response to a question about whether it would be tough for labor to defend Obama’s trade record. “Do we disagree on some things? Absolutely we do. Are we working on TPP? Yeah, TPP can be a good thing or a bad thing depending on what the substance of TPP is. We will continue to work with them. The difference between this administration and the Bush administration is that we are in the process this time. For eight years under the Bush Administration, we weren’t even in the process.”

Pallesen sees such rhetoric as more indicative of election-year posturing than capturing the reality of what people inside of the labor movement think.

“I was at a meeting recently with the Secretary-Treasurer of the AFL-CIO, Liz Shuler. People within the labor movement are not at all happy with Obama on the trade agreements," says Pallesen. "They feel the election is so close that if they beat him up on it, it will get Romney elected. That may very well be. However, as a union representing its members who are fed up with these attacks, we got to represent our members. Our members have made it clear they are sick and tired of the trade agreements. It’s our number one job killer.”

The unhappiness of Pallesen's members with President Obama’s trade deals suggests that Obama still has a long distance to go to win working-class voters. While the campaign's anti-Bain Capital attack ads appear to be hurting Mitt Romney’s favorability ratings, polling continues to show that Obama’s support among white working-class voters is at a historic low. (As Working In These Times previously reported, one of the steelworkers laid off by Bain Capital who is now starring in an infamous anti-Romney ad recently said that, despite thinking Romney was an “asshole,” he wouldn't be voting for Obama either.)

“If the President thinks he can put out some tough-talking campaign ads to distract voters from his record, he may be in for a rude awakening,” Pallesen says. “He’d be wise to drop the TPP and figure out a way to deliver on his campaign promises from the last election.”