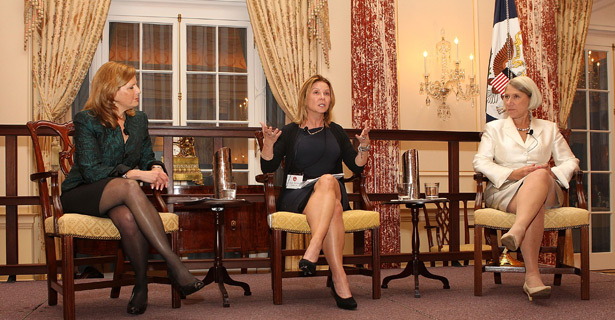 Managing Director of SKDKnickerbocker Anita Dunn (right) at the Fortune Most Powerful Women Dinner. SKD is one of the top consulting firms working for labor coalitions while also contracting with groups that undermine unions.   (Photo by Paul Morigi/Getty Images)

The following is a joint investigation of In These Times and Republic Report.

As labor seeks to communicate its message in the media and influence policy, many unions are looking to outside consultant firms. These groups sometimes provide the technical expertise, media suaveness, and necessary connections for unions to get their message out to the right audience. However, a recent joint investigation by In These Times and Republic Report reveals that several millions dollars of union members’ dues have been going to firms that are actively working against labor’s top priorities on behalf of business interests. In some cases, unions are paying consultants who are simultaneously working on behalf of union-busting causes.

In Ohio, Rhee’s group and state groups funded by Students First pushed Senate Bill 5, Gov. John Kasich’s attempt to end collective bargaining for most public sector employees. (The bill was later repealed by labor-led ballot initiative.) In Michigan, a leaked Power Point presentation shows that Students First promoted a bill to weaken collective bargaining for teachers. And in New York, according to a presentation obtained by In These Times, a SKD executive named Stefan Friedman worked on a team to produce education reform ads to demonize teacher unions. SKD ads cast teachers’ unions as special interests that cost the state millions of dollars in taxpayer money.

The strategy of using unions as a foil apparently worked by making it difficult for the unions to pressure lawmakers to support. "As a result,” notes the presentation, “rather than targeting specific [lawmakers] in a negative way, we placed all the pressure on the unions.” SKD was paid over $4.1 million for the ad campaign, which ran two years ago.

For fiscal year 2011, during the same period in which SKD conducted much of its work for clients antagonizing labor, labor unions, led by the SEIU, provided $799,458 in consulting fees to the firm, according to disclosures filed with the Labor Department. Although SKD employs several former union members as consultants, most prominently Jennifer Cunningham, who was a top staffer at New York-based affiliate SEIU 1199, it’s not clear if the conflict of interest was ever revealed during negotiations.

Asked if her firm’s labor clients were informed of the work her company does for groups like Students First, SKD spokesperson Rachel Racusen responded, “Why don’t you ask the SEIU?,” before hanging up the phone. She later e-mailed a clarification, noting SKDK’s contract with Students First “in no way conflicts with the work we do with other clients.”

Both SEIU and SEIU 1199 failed to respond to repeated requests for comment. The Communications Workers of America (CWA) paid SKD $75,000 for help with producing ads in 2011. While CWA declined to comment for this story, it has since dropped its contract with SKD after it was revealed they were also working for anti-teacher union proponent Michelle Rhee.

Other labor unions have decried the practice of paying firms that work for the opposition. The 150,000-member United Federation of Teachers (UFT) in New York City in the past has denounced SKD's history of working with Rhee and Mayor Michael Bloomberg. Asked about the effectiveness of these “mercenary” public relations firms that work for both unions and anti-worker groups, UFT President Michael Mulgrew said, “In my experience, the work of one passionate volunteer is worth much more than 10 people who are only in it for the money.”

Dewey Square Group, a prominent Democratic lobbying firm founded in 1993, is another case in point. Like SKD, Dewey regularly receives significant labor contracts. As recently as 2009, the labor-funded American Rights at Work gave $1.2 million to SKD and $414,429 to Dewey for “research, advocacy and media.”

The year 2009 provides a window into Dewey’s work on both sides of the business-labor divide. As unions geared up to pass sweeping labor reforms, the AFL-CIO, AFSCME, and the NEA provided sizable contracts to Dewey for political work. Collectively, labor provided Dewey with over $78,000 worth of contracts that year, mostly for help with telemarketing.

Dewey sells itself, in part, through its connections to the world of Democratic and labor politics. The website for the firm touts former AFL-CIO, SEIU, and AFSCME leaders, along with former top staffers to President Bill Clinton and Sen. John Kerry, as lobbyists-for-hire.

At the same time as Dewey was consulting for labor, the firm won a contract with the National Restaurant Association. The association, a lobbying group that represents McDonald's and dozens of other low-wage businesses, led a coalition to defeat labor’s marquee goal that year, the Employee Free Choice Act. The restaurant lobby, notorious for its work in killing the minimum-wage increase for tipped workers in 1996, paid Dewey $772,110 as its “public affairs counsel” in 2009.

Also in 2009, Dewey continued work for another industry group often at odds with labor, the Private Equity Council, a lobbying group for major private equity firms that was co-founded by Bain Capital. According to records filed with the Senate, the council spent much of that year influencing Congress on tax and pension issues, but also on matters relating to financial reform. Tax returns obtained by In These Times confirm that Dewey was compensated with a $188,544 contract.

Dewey only discloses a small portion of its lobbying revenue. The Private Equity Council compensation, along with the National Restaurant Association lobbying, isn’t registered as ordinary federal lobbying, so these relationships are obscured from public view.

The firm continues to nurture a financial relationship with organized labor. Last December, Dewey served on the host committee for a Working America fundraiser honoring former AFSCME President Gerry McEntee. In May, Jill Alper, Dewey's head of campaigns, was named the chief strategist of the Protect Our Jobs Campaign, which is seeking to enshrine collective bargaining rights in the Michigan state Constitution. The total cost of the campaign is expected to exceed $10 million, according to the Detroit Free Press.

The question, though, is whether the firm discloses the potential for a conflict of interest when it solicits business with organized labor. On their website Dewey Square proudly claims that it works on behalf of “Fortune 100 companies, national trade and professional organizations”. In statement Dewey Square spokewoman Ginny Terzano said "We adhere to strict confidentialy in our bussiness and will not address matters related to specific clients"

While Dewey refuses to disclose its client list, Dewey’s parent company, the WPP Group, owns several public-affairs firms that work for companies that run counter to union values. Burson-Marsteller, a WPP Group firm like Dewey, manages the public relations in America for Foxconn, the Asian electronics manufacturer widely condemned for its labor practices. Public Opinion Strategies, also part of the same corporation as Dewey, represents the U.S. Chamber of Commerce.

Dewey Square spokesman Ginny Terzano insisted that "Like most public affairs firm, Dewey Square has a diverse set of clients. We have a long working relationship with Democratic Administrations, elected officials, and organized labor and have consistently supported their policies. To suggest otherwise is not accurate. We have not and will not work on matters that are anti-labor."

However, the consulting group has attracted criticism for using so-called “astroturf” tactics to manufacture fake public outrage on behalf of corporate clients in opposition to labor's state position. In 2009, Dewey Square represented the health insurance lobby, America's Health Insurance Plans (AHIP) in fight against a key provision of Obama's proposed health care reform. Working for the health insurance lobby association, Dewey fabricated letters to the editor as senior citizens -- without their permission -- to protest the a provision Obama health reform plan that would cut back on Medicare Advantage, a privately managed alternative to traditional Medicare. The union backed Health Care for America Now coalition denounced these tactics saying " The Dewey Square Group has been using some extremely decpetive tactics to get AHIP's message out"

Asked why the NEA works with a firm like Dewey Square, NEA spokesperson Anitra Speight said, "We have a standard practice of working with organizations and firms that share our common beliefs. Our understanding is that [Dewey Square's] relationship with these groups is not inconsistent with our beliefs." Speight added that Dewey Square informed the NEA when it worked on nutritional labeling campaigns with the National Restaurant Association and Walmart, but that the NEA was unaware of Dewey Square's work with private equity firms and groups trying to dilute financial regulations, which the NEA supports.

The practice of hiring business-oriented public affairs firms can lead to situations in which labor helps to finance ugly tactics used against fellow workers. Last month, Mercury Public Affairs, a lobbying firm working on behalf of Wal-Mart, snuck one of its associates into an event hosted by Warehouse Workers United. The warehouse workers are currently engaged in a bitter dispute over a number of abuses, including claims that sub-contractors for Wal-Mart have cut corners over safety and failed to provide proper wage information. The associate, who posed as a “student reporter” from the University of Southern California, was discovered and later forced to resign from her job.

Lost in the story, which received headlines from the Los Angeles Times to Gawker, was the fact that Mercury simultaneously works for several labor unions, including Teamsters Joint Council 16 of New York, which paid them $52,000 in 2011 and the SEIU Leadership Council in California, which paid them $110,000 in 2011, according to Department of Labor Records. Both SEIU and Teamsters are members of the Change to Win coaltion, which is attempting to prevent Wal-Mart from entering Los Angeles.

Not all PR firms and political consulting firms work both sides of the aisle. Labor-friendly public relations firms like New York City-based Berlin Rosen and D.C.-based Tricom Associates do not work for any client that is working in opposition to union causes.

“I have a political point of view that is one of the telling a worker’s story," says Scott Treibitz, president of Tricom Associates. "It’s very difficult for me to help a labor union one day to tell a workers’ story in a contract struggle or organizing campaign and then the next day sitting down with a corporation and try to sell their position against a labor union. It’s too difficult of a proposition to bounce from one side to the other.”

Labor's use of public relations and political consulting firms that also work for anti-worker groups raises questions if union members’ dues are inadvertently helping finance union-busting efforts. As unions outsource their political strategy to firms with corporate clients, how are they certain important labor-related information isn't shared with groups working counter to union goals? Furthermore, aren't unions helping keep in business firms that then go and assist in the destruction of unions?

"I am speechless,” says Al Hart, director of United Electrical Workers News and Communication Program. “Unions should learn to speak for themselves and let their members speak instead of hiring enemies of labor to speak for them."