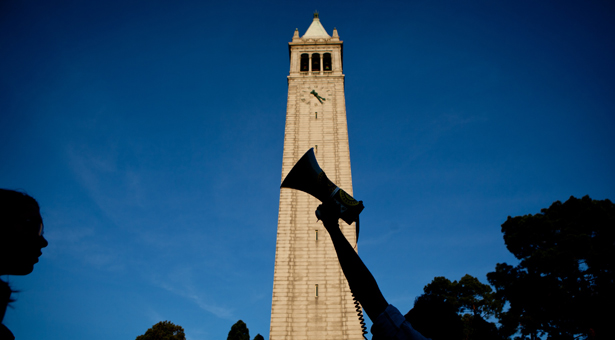 Students at University of California, Berkeley march through campus. UC-Berkeley is one of a number of research universities across the country restructuring their labor forces.   (Photo by Max Whittaker/Getty Images)

Imagination about travel corresponds in Verne to an exploration of closure… in which the man-child reinvents the world, fills it, closes it, shuts himself up in it, and crowns this encyclopedic effort with the bourgeois posture of appropriation: slippers, pipe, and fireside, while outside the storm, that is, the infinite, rages in vain. —Roland Barthes, on Jules Verne’s Mysterious Island, from Mythologies

At research universities in California, New York, Michigan, Georgia, Iowa, Texas and beyond, consulting firms have found a new foothold for restructuring academic labor along corporate lines. Under the aegis of “shared services,” clerical and technical workers are being pulled from their departments and offices and replanted in centers where their work is combined and rearranged for greater efficiency. IT or financial staff from, say, economics could find themselves sitting next to colleagues from anthropology. HR employees from student health services and public safety could be on the same call-line.

Despite its benign connotations, sharing is the new fiscal ideology—one that relies on sacrifice as much as brotherhood—with a language foreign to most academics. According to a white paper at the University of Pennsylvania, the shared service model, which arose in the private sector in the 1980s, “consolidates administrative functions into a structure that considers the groups that use the center ‘customers.’ It is performance and market-driven.” In a franker rendering, one book written by former managers at the Dow Chemical Company and Levi Strauss is titled Shared Services: Mining for Corporate Gold.

As ideology beyond mere bottom-lining, shared services are the prefigurative politics of the managerial elite who run universities. By centralizing their control over the academy’s legworkers, administrators erode allegiances between academic and non-academic employees and reduce the possibility of informal networking and united pushback among them. This strategy of division and containerization—purported to cushion universities from the unpredictability of endowments and state budgets—amounts to an academic disaster with dubious fiscal promise.

In 2009, UC-Berkeley relocated some 400 employees under “Research Enterprise Services.” RES consolidated the research support units of a number of small departments, museums, and centers, forcing non-managerial employees who already did support work to reapply for their jobs. A subset of RES employees—administrative professionals—have worked longer hours with no overtime pay.

“RES employees are less likely to have close ties with departments that they serve, so they are more likely to be out of touch with department-specific needs or programs,” says Tanya Smith, president of United Professional and Technical Employees (UPTE)'s Local 1 in Berkeley, a union covering some 14,000 workers across the state, including 900 at Berkeley. This configuration, she says, “contribute[s] to longer hours and more work to achieve what previously was completed by someone more familiar with the department's programs.”

Under “Operational Excellence,” a broad restructuring initiative that has already cost Berkeley $9 million in consulting fees from Bain & Company, the university will have a new center, Campus Shared Services, for employees doing work in finance, HR, IT, and research administration in a facility 2.5 miles off campus. While staff won’t have to reapply for their jobs, those who don’t want to move have been encouraged by the administration to “apply for another role on campus or outside the university.” Early adopters are set for January.

As Barrie Thorne, a professor of Sociology and Gender and Women’s Studies, sees it, the upshot of shared services is alienation. “In this isolated place, each staff member will do a more routinized job all day, every day, away from faculty, students, and being part of—even central to—department cultures,” Thorne says. “It’s a kind of de-skilling. It’s hyper-skilling in the sense of specialization, but it’s removing the artisanal serving of departments.”

Staff relocation compounds cuts and requirements already in effect under Operational Excellence. Without adequate staffing to channel resources to students, faculty and visitors, knowledge workers of all stripes—from the front-line employees who remain to graduate instructors and faculty—have been dumped with extra work that they may not be able to carry out for want of time or ingrained clerical expertise.

For Claudette Begin, a member of the Coalition of University Employees (CUE) who has worked at Berkeley’s School of Public Health since 2006, the ensuing demoralization has been manifold. Begin cites “the fear of layoffs, the volume of work, the anxiety of not being able to do your work, which affects your performance, the stress that this creates in relations between workers. We had somebody collapse on their knees one day. It affects people’s health.”

“Many of the members are looking for work elsewhere,” Smith adds. “They didn’t come to the university to work in a cubicle. They liked working with the people. They liked the area that they’re in.”

The logic behind gutting departments lies in the UC system’s positive ratio of senior administrators to faculty members.

UC-Santa Barbara English professor Christopher Newfield contends that shared services replace departmental and employee autonomy with a bureaucratic, command-and-control form of management that is inefficient in a university setting. According to administrative theory, employees aren’t sufficiently measured, assessed or controlled. Newfield argues this view belies the specialized division of labor in organizations as massive and multifarious as research universities.

What’s more, it comes with additional costs for measuring and controlling. Operational Excellence “cuts back on front-line staff that work with students and faculty,” Newfield says, “meaning it reduces services at the educational interface, and has done nothing to reduce administrative bloat at the upper-middle ranks.”

Mark Champagne, the recently retired business manager of UC-Davis’ Association of Students, speaks from experience. Champagne oversaw an $11 million budget covering the bulk of student services at Davis, including food and transportation. After Davis took up consulting firm Scott Madden’s recommendation to open a shared services center and demanded $600,000 in labor costs from the Association of Students, Champagne wrote an op-ed arguing that this would require cutting some 200 positions and the services that come with them. Within a week, Davis retracted its demand.

“You’ve got to show that centralization is good not just because it’s centralization, but because it actually saves money,” Champagne says. “What’s going on right now, it’s random. It’s the randomness that bothers me, as opposed to doing something that’s more systematic.”

For Risa Lieberwitz, a professor of Labor and Employment Law at Cornell, this randomness flows from the absence of democratic governance. “I don’t think there’s something inherently good or bad about the question to have shared services,” Lieberwitz says. “That’s where I think the issue of shared participation and consultation matters. People who are affected by these decisions have a certain experience and knowledge that people at the top of the hierarchy don’t have. Full respect for everybody who is involved requires full participation.”

While Cornell recognizes the importance of faculty governance to academic freedom, Lieberwitz says, the faculty Senate has been left out of decisions with major academic implications, like the university’s partnership with Israeli weapons manufacturer Technion and the shutdown of its Department of Education. Under Bain’s advisory, financial exigency has been used as a cover for unilateral decision-making.

“The university administration emphasized a number of times that it was not bringing in Bain as a consultant on academic issues,” Lieberwitz says. “I think that that makes a false distinction between what’s academic and non-academic.”

Since 2009, the UC Board of Regents and President Mark Yudof have responded to state retrenchment by taking the axe to their campuses—cutting hundreds of millions of dollars from UC’s budget, raising tuition 32% and more recently proposing another tuition hike of 81% over the next four years. The response has been rallies, direct actions, and widespread protest among faculty, staff and students.

While many of these actions have called for an end to Operational Excellence, movements for greater democracy in university governance face a variety of obstacles. At UC, knowledge workers are divided among an alphabet soup of bargaining units, each covering campuses across the state: the UAW (grad teachers), CUE (clerical workers), UPTE (technical workers), AFSCME (service and maintenance), the AFT (lecturers and other staff), and then undergrads and tenure-track faculty, who don’t have formal bargaining power. As Smith puts it, “There are coalitions that have been built that are working, it’s just that there’s a lot coming at us. We have to be continually regrouping, moving forward.”

Meanwhile, dissident university staff face threats to their already insecure jobs. “I have spoken to next to no individual staff who welcome the idea of shared services, but nobody will speak out,” says one employee, who has worked in managerial and sub-managerial capacities and wished to be kept anonymous. “People are mostly doing like I am doing, counting the years to retirement and hoping to stick it out.”

Some schools, like Cornell, don’t have a union representing administrative employees. Whereas UNITE HERE Local 34 has had a voice in the development of shared services at Yale, divisional mergers and the consolidation of clerical work at Cornell incorporate little formalized staff input.

As university departments are ripped at the seams and knowledge production continues its downward spiral into the hands of corporate managers and consultants, academia risks becoming an empty shell.

The fate of Gender and Women’s Studies at Berkeley rests on the availability of its single full-time staffer. “Visitors come, foreign visitors, global feminist people,” she says. “Part of our mission is to welcome people and have a space for intellectual discussions. Are we going to reach a point where there’s no there there?”