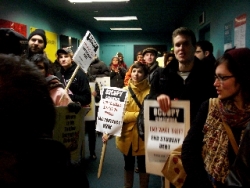 In December about 150 teachers, students and supporters occupied Columbia College in Chicago in support of part-time adjuncts, with the P-fac union, who have been in negotiations with administrators since 2010.   (Courtesy of P-fac)

Unionized part-time faculty at Columbia College in Chicago gained a major victory, union leaders say, when the National Labor Relations Board (NLRB) issued a ruling about the way classes are assigned and the administration’s failure to turn over requested documents that shed light on the process.

In years past, experienced part-time faculty at the arts and media-focused college in downtown Chicago typically could expect to teach the same classes year after year, in a process known as “rollover.” But around 2010, according to P-fac (Part-Time Faculty Association at Columbia College) President Diana Vallera, senior part-time faculty were not being assigned to expected classes, often finding them given to newly hired part-timers.

“If you’ve been there some time you have certain expectations of income, and you rely on that income,” Vallera says. “It was devastating for a lot of our members—especially since those classes were still available.”

This is among several issues being debated in contentious negotiations stretching since the union’s last four-year contract expired in 2010, and was indefinitely extended. For eight months, according to the union, administrators have refused to meet with them, so bargaining has been at a stalemate.

On July 17 NLRB administrative law judge Robert A. Ringler ruled in favor of the union on unfair labor practice charges related to the rollovers and documents requested by the union to analyze how the school was assigning classes. The NLRB found that the actual class assignment policy was not an issue that could be covered by bargaining, but the impact of the change on union members is subject to bargaining. The judge also said the administration must turn over the documents the union requested.

Columbia College declined to respond to specific questions for this story, and sent a statement:

We strongly disagree with the Administrative Law Judge’s decision and will continue to make those objections through the appropriate processes. Columbia has always engaged in good faith bargaining and will continue to do so. Our focus remains on the educational and financial well-being of our students, along with the vitality and quality of the College itself.

Vallera says the hiring of new part-time teachers instead of senior adjuncts is unfair to students as well as teachers.

“These are faculty with lots of experience,” she says. “This is about not valuing their faculty, but it’s also about what’s best for students and student learning.”

Vallera says it is unclear exactly why the administration is replacing senior instructors with newer ones or administrators—“we’re seeing deans teaching classes.” It is likely a cost-saving measure and possibly also a move to reduce the union’s power as the contract negotiations drag on.

“Maybe they’re trying to negatively affect the membership by having our senior members losing classes, but if so that backfired because senior members were upset and came to the union and got involved,” Vallera says.

Vallera hopes the decision will mean renewed negotiations between the college and the part-timers union, which has about 900 members. She says school officials have offered to meet with the union every three weeks for two hours, but union leaders don’t think that is sufficient given that past negotiations were held for at least three hours every week.

“I think this kind of decision is a step in the right direction and has gotten people involved in bargaining,” Vallera says. “Hopefully they will bargain in good faith at this point, not just on the effects of these changes because they’re forced to but also on the contract. Hopefully we won’t have to take further action on that.”

Judge Ringler chided the administration for failing to turn over documents and information requested by the union in December 2010, including lists of adjuncts whose classes were canceled and reasons for class assignment switches.

In addition to an employer's duty to provide necessary and relevant information, “an unreasonable delay in furnishing such information is as much a violation of the Act as a refusal to furnish the information at all.

The NLRB also ordered 18 part-timers with classes canceled must be paid the equivalent of a three-credit course, with interest, about $4,700. The ruling said:

Meaningful bargaining cannot be assured until some measure of economic strength is restored to the Union; a bargaining order alone, therefore, cannot serve as an adequate remedy for the unfair labor practices committed.