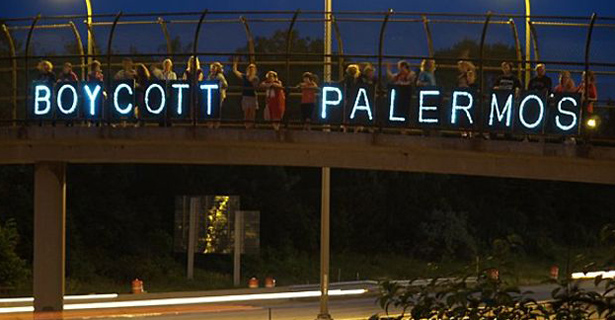 On Sunday, students and Wisconsin union members joined striking workers as they launched a national boycott of their employer, Palermo’s Pizza. The boycott is the latest escalation in the workers’ two-month strike against the frozen pizza factory. It follows the second postponement of the workers’ union election, based on alleged anti-union firings -- many in the name of immigration enforcement -- which union supporters say have made a fair vote impossible.

“There’s no possible way for us to have a free and fair election with the present conditions,” says Maria Somma, an organizer with the United Steelworkers (USW) union. (Full disclosure: The USW is an In These Times sponsor.) The Palermo’s Workers Union has asked the National Labor Relations Board (NLRB) to reinstate dozens of fired workers and to exercise a rarely-used power: to order the company to proceed directly to union negotiations.

“No Justice, No Piece”

As I’ve previously reported for Working In These Times, Palermo’s workers say they began organizing in 2008 to address excessive workload and disrespect on the job, and chose last November to pursue unionization. Workers first struck May 29, the same day that the company refused workers’ request for union recognition, began instructing workers to train replacements from a temp agency and issued letters to workers with a 28-day deadline to verify that they were authorized to work in the United States.

On May 30, workers filed a petition with the NLRB seeking an election to win union recognition as the "Palermo’s Workers Union." In a meeting that day with workers and their supporters, the company announced that the window for reverifying work authorization would be reduced to 10 days. The next day, more workers went on strike, and a union attorney filed the first NLRB charges of illegal anti-union tactics against Palermo’s.

The most recent NLRB charges concern what happened a week later. On June 7, in what experts described to the New York Times as an unprecedented move, U.S. Immigration and Customs Enforcement (ICE) announced that it was suspending immigration enforcement at Palermo’s, presumably to avoid tainting the results of the NLRB election.  But on June 8, Palermo’s sent letters to 75 workers saying they were being terminated. (Some striking workers allegedly had been fired as early as June 2.)

“It is a very clear example of them using immigration as a union-busting tool instead of being compliant with ICE’s direction,” says Christine Neumann-Ortiz, executive director of Voces de la Frontera, a Wisconsin immigrant rights organization and low-wage worker’s center that has been working closely with the workers. Neumann-Ortiz notes that Palermo’s mass firing took place after ICE suspended enforcement, and says that the shortened 10-day deadline was Palermo’s creation all along.

She charges that Palermo’s shed “crocodile tears” about the shorter deadline in the May 30 meeting with clergy, Voces and politicians, falsely claiming it was imposed by ICE.  The next day, she says, a USW organizer called ICE and was told that the agency had nothing to do with imposing a shortened deadline. Neumann-Ortiz also says that some of those fired were workers who had never been asked to verify their status.

In an e-mailed statement, Palermo’s Director of Marketing Chris Dresselhuys says, “Palermo’s cooperated with ICE and obeyed the law. The baseless allegations made against Palermo’s represent an unfortunate pattern of deception and obfuscation that harms our employees and community.” The statement says that Palermo’s was cooperating with the NLRB investigation. Palermo’s declined to answer further questions.

While terminating strikers, Palermo’s has hired 82 new workers, according to an NLRB stipulation reported by the Milwaukee Journal-Sentinel.

“We want people to know that it’s not what the company says, that ‘Palermo’s is a family,’” says Caesar Hernandez, one of the strikers fired by the company. “They only say that to keep up a good image for the public. But really, internally in the company, it’s a very ugly atmosphere. There is worker mistreatment, racism, humiliation.”

“People are very fearful,” says Raul de la Torre, another fired striker. (Both Hernandez and de la Torre were interviewed in Spanish.) He adds that workers who had supported the union petition, but never went on strike, are now “both confused and afraid. When you talk to them, they’re saying, ‘No, I don’t want to know anything about the union.' They want to protect their jobs. But we’re not going to give up the struggle. Because we know if we’re victorious, they’re going to be the beneficiaries.”

The union's latest NLRB charges allege that Palermo’s illegally terminated and intimidated workers to prevent them from voting for a union. Neumann-Ortiz and Somma say that, to redress those violations, they’ve asked the NLRB both to reinstate the fired workers and, rather than holding an election, to order Palermo’s to begin negotiating with the Palermo’s Workers Union. (When workers presented Palermo’s with a petition seeking union recognition in May, it had signatures from three-quarters of permanent employees.) The NLRB has the power to issue such “bargaining orders” when it deems employer misconduct to have made a fair election impossible.

“The company has run a campaign of misinformation, spent a lot of money on [anti-union firm] Jackson Lewis, and this is clearly a threat to other workers if you’re willing to do mass firings," says Neumann-Ortiz. "This was orchestrated. They already had the wheels in motion of how they were going to undermine collective organizing.”

Voces and USW say that Palermo’s hand was strengthened when another union, United Food and Commercial Workers (UFCW) Local 1473, petitioned to participate in the election. The NLRB originally set the union election for July 6, with “No Union” and “Palermo’s Workers Union” set to appear on the ballot. According to Voces and the USW, workers voted last month that if their Palermo’s Workers Union wins union recognition, it will pursue affiliation with the USW. When it granted the UFCW's request to be added as a third option on the ballot, the NLRB postponed the election date. (The USW is affiliated with the AFL-CIO; the UFCW is affiliated with the Change to Win federation.) Neumann-Ortiz says that UFCW’s petition to the NLRB “had less than a 10% showing” of worker support. Local 1473 did not respond to a request for comment.

Somma charges that the change in the election date gave Palermo’s a pretext to back out of an agreement regarding the eligibility date for the election –- that is, the date as of which workers had to be Palermo’s employees in order to participate. According to Somma, under the old agreement currently fired strikers would have been able to vote, and the workers brought in to replace them would not have been.

“That intervention,” says Somma, “effectively disallowed any of the strikers to be part of the election process.” Neumann-Ortiz adds that UFCW’s intervention “allowed the replacement workers to be brought in” to the pool of voters.

Neumann-Ortiz says that those workers have been subjected to an aggressive anti-union campaign since they arrived at Palermo’s. The company’s statement said that it will “continue to have a fact-based discussion with our workers and provide accurate information to help those voting to make an informed decision.”

The latest NLRB charges, filed July 2, led the NLRB to indefinitely postpone the election, which had been rescheduled for July 27. Neumann-Ortiz expects a decision from the NLRB in late August.

“It’s time for the NLRB to make a decision that is very firm in its condemnation of employers that try to use immigration enforcement activity or tools to undermine federally protected rights of all workers to organize to improve working conditions," says Neumann-Ortiz. "I don’t want to see the NLRB throw workers under the bus.”

“We’re fighting that our rights as workers will be respected,” says de la Torre, “and that they stop treating us as if we were just animals…we’re not going to give up this fight until we get justice.”

“I feel that after these last eight weeks, we are stronger than when we started,” adds Hernandez.

In the meantime, strikers plan to keep the pressure up on Palermo’s. “They might try to trick people who don’t know the company,” says Hernandez.  “But...we know the production is not good for them right now.”

Sunday’s boycott launch rally was held outside a local Costco store; the majority of Palermo’s frozen pizzas are sold at Costco locations. Workers were joined at the event by leaders of the United States Students Association (USSA), the country’s largest student organization, which was holding its national conference in Wisconsin. A delegation of workers and allies went into the store and made their case to a manager, who told them he was not authorized to respond.

“We want Costco to suspend their purchase of Palermo’s products until there’s a resolution to this conflict,” de la Torre said Monday. AFL-CIO President Richard Trumka wrote a letter to Costco’s CEO, urging the company to “initiate an audit to identify changes needed to bring Palermo’s into compliance” with Costco’s Supplier Code of Conduct.

“I don’t believe that this is just happening at Palermo’s,” says Hernandez. “The only difference is that in many other workplaces, and many other factories, workers lack the courage to address the many problems that our happening. Our courage has come from the many-year build-up of humiliation and injustice.”