Philadelphia Charter School Teachers—And Their Union—Stand Up to Management 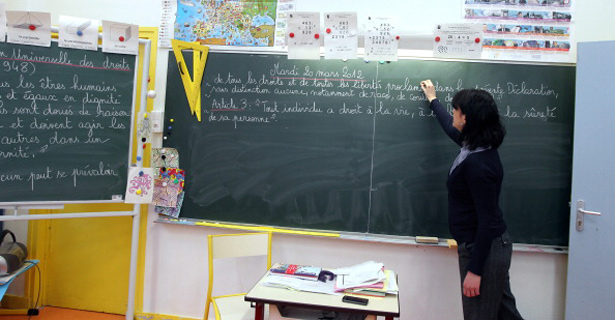 Between 10:20am and 12:46pm, in the middle of class instruction, eight teachers were handed pink slips. Students soon figured out what was going on and revolted—turning over lockers, throwing trashcans, punching holes through walls, ripping down posters and taping them to their bodies as protest signs, and attempting two walkouts.

When principal and CEO Ernest Holiday entered the room of a popular but freshly terminated math teacher, he saw a crowd of students, accused the teacher of inciting a riot, asked him to leave the premises and docked his pay for the remainder of the year.

Two weeks later, the assistant principal for academic instruction, who had received “outstanding” ratings in every performance category in March, learned her contract would not be renewed and was asked not to return to the building for fear of further uproar. When she protested, her email account and work phone were disconnected.

Over the course of that month, 14 teachers and staff were fired. Though Holiday had warned of budgetary issues in a meeting prior to May 31, the fired teachers and staff soon saw their positions posted on PAreap.net. They also saw, at the bottom of their notices, a mysterious cc’d recipient—Harold Kurtz, the head of Synergy Educational Consultants, which advises the school annually on staff retention. The writing was on the wall: People who didn’t play by Holiday’s rules were out.

“It’s quite obvious that the teachers who were willing to speak up have been terminated,” says a fifth-year English teacher who was fired. (Like others who are now on the job hunt, she agreed to speak only on the condition of anonymity.) “[Holiday] doesn’t really take too kindly to people challenging him.”

Unlike most charter schools, this one isn’t having an easy time getting rid of outspoken voices under the say-so of a principal. Delaware Valley is one of five charters in Philadelphia unionized under the Alliance of Charter School Educators (ACSE), a local of the American Federation of Teachers. Under the banner of ACTS, the Alliance of Charter School Teachers & Staff, the AFT is taking on new organizing at charter schools in Chicago, New York, Michigan and elsewhere.

“Charters schools have this [inclination to release dissident staff], but it happens with very little controversy, because if you don’t have a union, you’re fired,” says Shaun Richman, the AFT's deputy director of organizing.

In most cases, union certification at charter schools operates under state-specific rules rather than those of the NLRB. In Illinois and New York, charter teachers have card-check rights. In Pennsylvania, unionization requires an election under the Pennsylvania Labor Relations Board, the funding of which has been cut by Republican Gov. Tom Corbett.

“The law in Pennsylvania is fine, though card-check would certainly be a more enlightened process,” Richman says. “When activists are getting fired and employers are refusing to negotiate, then you can’t wait nine months for a hearing.”

Once a charter does become unionized, teachers and instructional staff have an institutional vehicle for collective bargaining and consciousness-raising around teachers’ rights and the teaching profession.

“With the union, they know the law,” says the Delaware Valley math teacher accused of inciting the riot. “They know all the defined details of what should happen and shouldn’t happen. The main reason I wanted to get involved was to learn more, empower myself, and empower my colleagues, and hopefully that’ll create a better environment for my students.”

“I was first questionable of the union, because at the time [Holiday] was giving them the things that they needed,” says Holiday’s office manager and executive assistant, who delivered the lay-off letters before getting fired two weeks later herself. “If I were a union member, it may have gone down differently for me.”

After the firings, teachers delivered a letter to the school administration detailing the complaints that had compelled many to speak out in the first place. Among the issues: a “mastery” grading system that effectively changes the passing grade from 65% to 80%, instigating grade inflation; a strict uniform policy whereby students are sent home—in some cases, more than 10 miles away—for stripes on pants or shoes; drug transactions between students and security guards; classroom oversight with no constructive feedback; expansion of the student body without hiring more teachers as a means of grabbing more state dollars; and poor administrative communication.

After no response from the administration, teachers read their letter at an open board meeting on June 26. An unprecedented swarm of parents, students, and alumni came to speak out on behalf of fired teachers and, in many cases, in support of their complaints—filling nearly 3 hours with 3-minute speeches.

For parents like Selma Ellis, who has sent two children to Delaware Valley, the meeting was cathartic. “We’re part of the community, we pay our taxes, we never knew when the board meetings were,” Ellis says. “We have no communication with the principal. We have no voice.”

At the July 24 board meeting—which was rescheduled for 9:15am, a work hour, and ended up drawing fewer than 20 people—board members voted in a new president and gestured toward greater parental and teacher input into school affairs.

The firings remain unresolved. After the board failed to respond to teachers’ formal grievances for being dismissed without due process or cause, teachers filed for arbitration, the first such case at a charter school in Philadelphia. The assistant principal, the third black woman in three years to serve in her position, is pursuing discrimination charges for her own termination.

While Philadelphia's existing charter schools continue to expand with meager district oversight, the city's School Reform Commission is considering a plan to shift charter coverage to 40% of students by 2017. The struggle at Delaware Valley is a harbinger of challenges—and organizing opportunities—to come.