Andy Stern Responds to Critics of His Post-SEIU Career 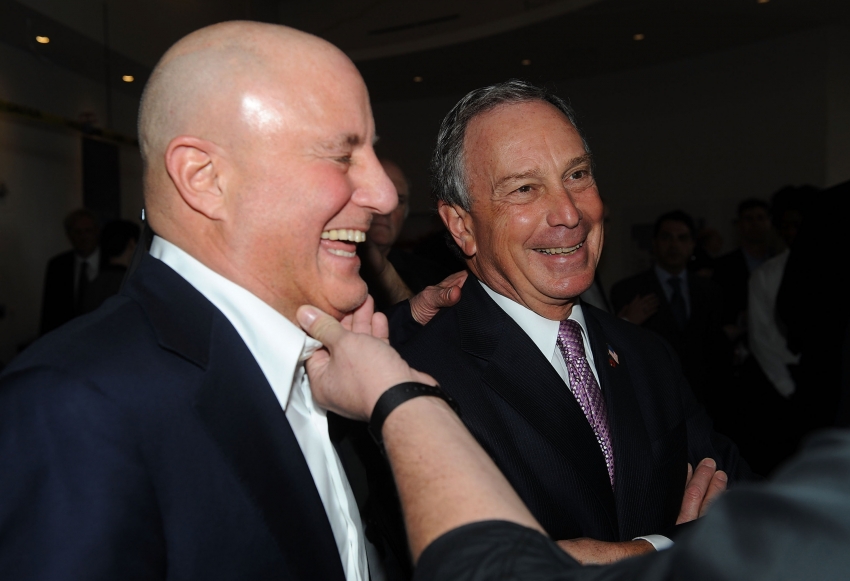 Former Service Employees International Union (SEIU) President Andy Stern has long faced criticism from dissidents within his own union that he sold out workers in order to accommodate corporate America. His critics say they have been proven right by Stern's career moves since he left SEIU in 2010. In particular, they point to Stern taking two positions associated with a private equity titan as well as joining the board of an organization that is alleged to have trained school superintendents to combat teachers' unions.

Stern recently accepted a paid position on the board of directors of the biochemical company SIGA, owned by billionaire Ron Perelman’s private equity firm MacAndrews & Forbes. Stern also recently accepted an endowed position at Columbia University as a Ronald O. Perelman Senior Fellow at the Richard Paul Richman Center for Business, Law, and Public Policy. During his tenure at SEIU, Stern faced criticsim for cutting a 2006 deal with AlliedBarton, also owned by Perelman, in which SEIU agreed to abandon an organizing drive of an estimated 10,000 security guards in exchange for employer neutrality in organizing AlliedBarton security guards elsewhere.

Stern has also taken an unpaid position on the board of directors of the Broad Center, which critics allege is hostile to teachers’ unions. (Along with Stern, the center's board also includes former Obama economic advisor Larry Summers, former Democratic Congressman turned bank lobbyist Harold Ford Jr., and former Louisiana state Superintendent of Education Paul Pastorek, who is infamous for using the devastation from Hurricane Katrina as a means of converting public schools to charter schools and pushing voucher programs.) The Broad Center is run by the Broad Foundation, which has spent $400 million to fulfill its mission statement of “transforming urban K-12 public education through better governance, management, labor relations and competition.” The Broad Foundation was founded by billionaire Eli Broad, who believes that education reform entails taking anti-teacher union measures such as “charter schools, performance pay for teachers and accountability” for teachers.

In 2006, Broad told Vanity Fair that his vision of reform comes from “the top down." The next year saw Broad and Bill Gates team up to spend $60 million on their vision of education reform, which meant weakening teacher union contracts to allow for more flexibility. The Broad Foundation also sponsored the notorious anti-teachers'-union movie, Waiting for Superman. After the election of Barack Obama and the appointment of teachers-union foe Arne Duncan as Secretary of Education, Broad told the Wall Street Journal that his vision of education reform was possible because "the unions no longer control the education agenda of the Democratic Party.”

Many education activists charge that the Broad Center, led by former New York City Public School Chancellor Joel Klein and former Washington, D.C. Public School Chancellor Michelle Rhee, is a training ground for superintendents who “reform” education by limiting the power of teachers’ unions and promoting privatization plans through charter schools. The Broad Center trains people with no background in education to be school superintendents in six weekend courses spread over a 10-month period. The program is considered an alternative to regulations in many states that require superintendents to have years of training and experience in education.

“The chairman of the board Joel Klein is a fierce critic of teachers' unions; so is Michelle Rhee. The Broad Center is most certainly a pro-charter school organization. Eighty-eight percent of charters are non-union,” says former Assistant Secretary of Education Diane Ravitch, a leading critic of so-called "education reform." “I found it very odd to see Andy Stern on that board.”

In an interview with Working In These Times, Stern says of his unpaid role with the Broad Center that “They train leaders in education from superintendents to other people. They have no ideology in the sense of a proscribed set of policies, management leadership, or dealing with school boards. A lot of this is for people that are from education by their history. It’s for people from other walks of life like Michael Bennett and Joel Klein and many others. Their goal is to not pursue a specific ideology, but to understand all the different issues facing education.”

That explanation doesn't convince some long-time critics of Stern.

“I think it’s again the latest indication that his true interest is in being a junior member of the corporate ruling class,” says John Borsos, secretary-treasurer of the National Union of Healthcare Workers (NUHW), which split off from SEIU over deals Stern cut with hospitals that its members considered to be too generous to employers. “I think he always had that propensity. He always wanted to be a mover and shaker in corporate America, which is why he was such an accommodationist. Now he is showing what his true intentions were. He ran the union to accommodate corporate America and now he is cashing in.”

Stern rejects these charges and sees no conflict of interest in taking the position at Columbia University, which is funded by Ron Perelman, with whom Stern is criticized for negotiating employer-friendly deals.

“He gives a grant. Someone funds the position. They don't pay you to speak. I don’t think it’s unusual for people in academia to have titles related to donors. That’s just the nature of academia,” says Stern. “I am trying to look at what is being done around the country from Berkeley on income inequality and Harvard on labor markets and see if there is a gap Columbia can fill. I am also trying to stimulate a discussion about economic policies.”

Stern also dismisses charges of having a conflict of interest for taking a position on the board of SIGA. “I don't work at SEIU anymore," Stern says. "I think the company, SIGA, which has invented the cure for smallpox, has a successful role in life. As a person who watched all of our healthcare workers have anxiety about smallpox vaccines, it’s a pretty good advance.”

As for the charges that he negotiated sweetheart deals with Perelman's company, Stern says, “I would say that almost every major private equity firm would violently disagree and say that SEIU was built to hold corporate America accountable."

With regards to the crticism he faces, Stern says, "Life is not about everybody agreeing. I am involved in stimulating a bunch of work on the future of work and the labor movement.”

Stern is correct that not everyone agrees with that assessment. Says Borsos, “I am not sure anyone trusts the Ron Perelman Professor of Business to advocate the union agenda. I wouldn't even call him a labor leader at this point because no one views him as a labor leader except big business.”