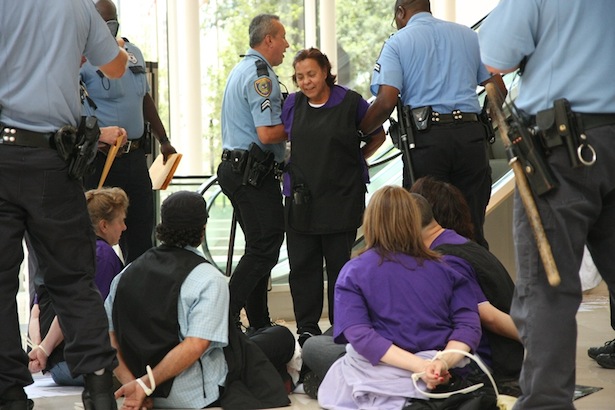 Three weeks after hundreds of Houston janitors went on strike, janitorial contractors and Service Employees International Union (SEIU) Local 1 returned to the negotiating table on Thursday. But the bargaining concluded Friday without a settlement or an end to the strike.

As I’ve reported, negotiations over janitors' third union contract broke down at the end of May. Following a series of June work stoppages, hundreds began walking off the job on July 10. Their cause caught fire nationwide, sparking a series of high-profile demonstrations, solidarity strikes and statements of support.

Wages are a key sticking point. SEIU proposed an increase from $8.35 to $10.00 over three years, but management’s “last, best, and final” offer in May raised wages only fifty cents over five years. "The union's proposal makes their lives a little better, while [management's] proposal pushes the janitors deeper into poverty," SEIU Local 1 President Tom Balanoff wrote in a July 30 letter.

Also at issue: a clause in the janitors' current contract that allows contractors to bid on some accounts at lower wage and benefit rates and then bring compensation up to the contract's standard over a three year period. SEIU says that while the clear intent of the language was to apply only to bidding on non-union accounts, contractors are now claiming it applies to union accounts as well. Balanoff's letter calls this "a blatant attempt to destroy the Houston janitors' union."

Talks are set to resume on Wednesday. The contractors are employed by major corporations like Exxon Mobile and JP Morgan Chase, which SEIU leaders believe hold the ultimate decision-making power in the negotiations.

Janitor Norma Perales said she and her husband went on strike last month “to be seen, to be valued. And so they take us into account.” Together, Perales and her husband work three jobs to support their three children, ages 6 to 10. He works a nine-and-a-half-hour daytime shift in the shipping and receiving department of a furniture warehouse. Then both spouses work 5-hour evening shifts in the same building for the contractor ABM Janitorial Services. The kids’ grandmother watches them at night; Perales said her husband can spend time with them “pretty much only during the weekends.” (Perales was interviewed in Spanish.)

With a raise to $10 an hour, Perales said she and her husband “could give our children more than we can now, because we’re struggling to pay our bills and our rent.  The time that we spend away from our children would be worth something.”

Three of the largest contractors–ISS Facility Services, GCA Services, and ABM–did not respond to requests for comment. In a letter quoted by the Houston Chronicle on July 20, the Houston Area Contractors Association wrote that, “Although the SEIU has been touting high participation, we estimate that some 98 percent of available staff have ignored the purported ‘city-wide strike.'” An SEIU spokesperson told the Chronicle, “Building owners always say that.”

The SEIU estimates that of the 3,200 janitors covered by the union contract, over 500 are on strike. All of the striking workers are employed by contractors against which SEIU has filed Unfair Labor Practice charges with the National Labor Relations Board (NLRB). Under labor law, workers striking to protest unfair labor practices have protections against being permanently replaced that other striking workers do not.

Since the strike began, SEIU has employed a range of additional tactics to put pressure on the building owners, including regular pickets and demonstrations. Perales says that during these actions, children in tow, she and her husband “feel important, that we can fight for our rights. And we feel good."

In the strike’s second week, SEIU members in eight cities went on one-day solidarity strikes against the employers targeted in Houston (“conscience clauses” in their contracts provided them protection to do so). Last Wednesday and Thursday, on the eve of negotiations, janitors held rallies in several cities at buildings owned by the Houston companies--including Brookfield Properties, the company that also owns New York City’s now-famous Zuccotti Park.

SEIU has also launched online ads tied to a video and petition called “Call Me Jamie” (a riff on the pop hit “Call Me Maybe”), echoing a Capitol Hill confrontation in which janitor Adriana Vasquez asked JP Morgan Chase CEO Jamie Dimon, "Despite making billions of dollars each year, why do you deny the people cleaning your buildings a living wage?" SEIU alleges that Dimon told Vasquez to call his office to set up a meeting, but has since dodged her calls. Another SEIU ad campaign highlights $65 million that building owners saved by appealing their property tax appraisals.

At least 69 people have been arrested in civil disobedience actions, including a group of members and activists from outside Houston whom SEIU calls the “Freedom Flyers.”  “Between my job and my husband’s job as a union janitor, we have been able to give our children the foundation for a bright future,” Maria Piña, an arrestee from Chicago, said in an e-mailed statement. “I want that for all other working people, too.”

None of those arrested were Houston janitors; a spokesperson told the Chronicle that the union kept participating janitors clear of arrest to avoid retaliation by management.

The janitors have received backing from local heavyweights. A group of religious leaders held a press conference Thursday declaring their support for the janitors, while simultaneously requesting that civil disobedience halt during negotiations. Houston public radio reported that Archbishop Daniel Cardinal DiNardo told the crowd, “I appeal to all people of good will, to be in solidarity with the janitors as they seek a modest pay increase over a three year period…Janitors are key to the success of Houston.”

In an e-mailed statement July 20, Houston Mayor Annise Parker issued a call for the janitorial companies to return to negotiations, saying, “Their unwillingness to talk has left the union with no other choice but civil disobedience. ... The union has made good-faith offers. Now it’s time for the janitorial contractors to sit back down at the table to work out an agreement that is fair and just.”

In an e-mailed statement following Thursday and Friday’s negotiations, the SEIU Bargaining Committee said, “Some progress was made at the bargaining table this week. However, negotiations ended today without an agreement. We will return to the table on Wednesday to continue talking about ways to lift standards for janitors in Houston.” The statement added that workers would continue to strike, to rally daily, and to “be visible on the streets of Houston,” but would “refrain from civil disobedience as long as we are engaged in productive negotiations.”

Perales said that when she and her husband first learned that workers in her building would be going on strike, he told her “that if I wanted to not put both jobs at risk, he could go on strike and I could keep going to work.” After thinking about it, she decided to strike as well: “I realized that I was fighting for something that would benefit both of us, and all of our co-workers, and I wanted to be part of the struggle.”