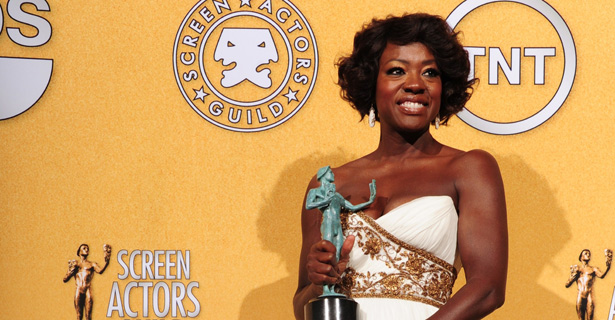 Viola Davis, shown here with her SAG award for Outstanding Performance by an Female Actor in a Leading Performance for "The Help," will be appearing soon in anti-teachers union propaganda at a theater near you.   (Photo by Frederic J. Brown/AFP/Getty Images)

The world’s largest private-sector employer and the country’s most prominent conservative entertainment company have teamed up to sponsor a fundraiser called “Teachers Rock.” Backed by Walmart and Anschutz Film Group, the August 14 event will feature live performances from musicians like Josh Groban and appearances from actresses like Viola Davis; it will be broadcast August 17 as a CBS special with messages from actresses like Meryl Streep. And it will promote the upcoming feature film Won’t Back Down, Anschutz’s entry in the “education reform” wars.

Won’t Back Down is reportedly a highly sympathetic fictional portrayal of “parent trigger” laws, a major flashpoint in debates over education and collective bargaining. Under such laws, the submission of signatures from a majority of parents in a school triggers a “turnaround option,” which can mean the replacement of a unionized school with a non-union charter. Such laws have been passed in several states, but due to court challenges, the "trigger" process has never been fully implemented.

“It's another Waiting for Superman," says Jose Vilson, a New York City math teacher and board member of the Center for Teacher Quality. "You have these popular actors, who as well-intentioned as they may be, they may not know all the facts, but they’re willing to back up a couple of corporate friends or people maybe they've become familiar with" in "trying to promote this sort of vision."

Parent trigger is one of the model bills pushed by the right-wing American Legislative Exchange Council (ALEC). Adamantly opposed by teachers unions, parent trigger bills (as I’ve reported for Salon) have often been spearheaded and supported by Democratic politicians. In a Wall Street Journal op-ed slamming teachers unions, Campbell Brown highlighted Won’t Back Down as evidence that “teachers unions have become a ripe target for reformers across the ideological spectrum” and Hollywood “has turned on unions.”

According to a July 24 joint press release, Tuesday's concert is “presented by” Walmart and by Won’t Back Down, which the release describes as a “powerful story – inspired by true events” about “determined mothers who will stop at nothing to transform their children’s failing inner city school. Facing a powerful and entrenched bureaucracy and a system mired in traditional thinking, they risk everything to make a difference in the education and future of their children.” Proceeds from the fundraiser will go to the non-profits Teach For America, Feeding America and DonorsChoose.org.

According to the release, the benefit will “feature scenes” from the film, and Viola Davis, one of the film’s stars, will be among the performers making “special appearances” at the event. The CBS TV special will include additional appearances by celebrities including Streep, Adam Levine of the band Maroon 5 and NBC's The Voice, and Matthew Morrison, who stars as a beloved high school teacher on Fox show Glee. Representatives of Streep, Levine and Morrison declined requests for comment; representatives of Davis, Groban, and CBS did not respond to inquiries.

Reached over e-mail, Anschutz Film Group (AFG) CEO David Weil said that both the benefit and the film "highlight the importance of teachers and education and seek to inspire parents to believe that they can make a real difference in the lives of students and teachers.” The movie is produced by AFG's Walden Media subsidairy. AFG operates as a subsidiary of Anschutz Entertainment Group, which in turn is a subsidiary of the Anschutz Company. Philip Anschutz, the Anschutz Company's chairman and CEO and the billionaire owner of The Weekly Standard and other publications, has provided major funding to efforts to restrict obscenity on television and oppose bans on sexual orientation discrimination.

Walden also backed Waiting for Superman, the 2010 documentary that argued unions were a primary obstacle to improving education. Walden CEO Michael Bostick told the New York Times that, after Superman, the company "realized the inherent limitations of the documentary format." With Won't Back Down, the Times reported, "he said, the idea is to reach a larger audience through the power of actors playing complicated characters who struggle with issues that happen to be, in his words, 'ripped from the headlines.'" The film is being distributed as part of a joint venture with 20th Century Fox.

Asked over e-mail how AFG expected Won't Back Down to influence education policy debates, Weil said the movie "explores many different approaches to issues that parents face every day as they selflessly advocate for their children to receive the promise of a great education." Weil adds that the film does not "advocate any specific approach," and that, "If anything, we hope the film will inspire parents to be aware of and involved in their children's educations."

Vilson describeds Walmart’s involvement in "Teachers Rock" as evidence of an agenda “to Walmart-ize teachers" by securing the power to “totally strip collective-bargaining rights and health benefits," and exercise discretion to replace teachers at will. As David Moberg has reported, Walmart has had a hostile relationship with organized labor for decades. None of its U.S. stores are unionized.

Walmart was a member of ALEC until May, when it ended its membership following pressure from activists after the killing of Trayvon Martin. A Walmart vice president wrote, in a letter reported by the Los Angeles Times, that ALEC had lost its proper focus on advancing "Jeffersonian principles of free markets." According to the Center for Media and Democracy, the Walton Family Foundation has historically been a major donor to organizations seeking to privatize public schools. Walmart declined a request for comment.

Vilson says he was particularly disappointed by Viola Davis' participation, given The Help star's past comments about wanting to elevate the voices of often-ignored domestic workers.

"You should also see the alignment between that and what's going on with teachers," says Vilson, "and the bad tone that's being sent throughout the country."

"I'm sorry," Davis told the New York Times, "I just know if you don't have a strong advocate for a child, they're not going to make it."

The New York Times reported that the trigger law portrayed in Won’t Back Down differs from its real life counterparts in a key respect: Unlike standard parent triggers laws which require just a majority of parents’ signatures to trigger a turnaround, the law in the movie requires support from a majority of a school’s teachers as well. Asked why, Weil told In These Times, "It was important that the law used be fictional because the film is not based on a specific actual law," but instead "draws on many situations throughout the country."

Asked whether "Teachers Rock" would address education policy, including teacher layoffs across the country, Weil said it would not. "It's a celebration of a group of unsung heroes of our society - our teachers," he says. "It is not intended to be a political event."

Won't Back Down will reach theaters next month amid increasing national traction for parent trigger. In June, the policy received a unanimous endorsement from the U.S. Council of Mayors. Its supporters scored a key legal victory last month, when a Superior Court judge found that the Adelanto School District had erred in allowing parents to rescind their signatures on a trigger petition. Without the rescinded signatures, the petition lacked a majority.

According to the Los Angles Times, the pro-trigger group Parent Revolution accused opponents of trying "to bully and trick parents into rescinding their signature." The school board's president told the Times that the pro-trigger organization Parent Revolution and another group misled parents into signing the trigger petition by presenting it along with another petition calling for reforms, and telling them that the trigger petition would serve as leverage to support the other one. He said he will reccomend an appeal.

“If you want to transform the system so that it gets better results,” National Education Association President Dennis Van Roekel says, “collective bargaining is a must. … There’s got to be a way for professionals who are in the classrooms with the students to have a voice.”  Van Roekel, who leads the nation’s largest teachers union, describes trigger’s backers as a mix of people who “have good intentions,” and others “who are privateers who are trying to find ways to make money off the education process.”

Parent Revolution national advocacy director Michael Trujillo acknowledges that parent trigger could lead to the elimination of union recognition at a school, but says ending collective bargaining is not the goal: “It just adds the love of a mom and a father to that [bargaining] table.” He describes parent trigger as a reform that “hands raw power to moms and dads, giving them the power to be the change in their child’s failing school.”

Fund Education Now co-founder Kathleen Oropeza contests the claim the trigger empowers parents. Once the trigger is pulled, she says, parents like her are “not going to be in there telling these for-profit charter developers how to run their school.”  Oropeza’s organization was part of the successful campaign to defeat a trigger law in Florida's legislature. “Parents are being used as a tool,” Oropeza charges, by people trying “to create a revenue stream for corporations. And the children are losing.”

Vilson accuses parent-trigger advocates of seeking to “take advantage of an often misinformed public” in order to “get their own sort of reforms in those otherwise unbreakable schools.” He names Parent Revolution as a group whose sponsors are “anti-union and frankly anti-professional,” and seeking to rebuild schools “in the hands of the one or two people who have the funding.”

As David Sirota has noted, several studies have found that charter schools perform worse overall than other public schools. Teachers at charter schools are far less likely than their other public school counterparts to have union contracts. Van Roekel says that education reforms should include measures to improve teacher retention: "We lose 47% of teachers hired in America within five years. There is no business large, small, or medium in America that could survive with that level of turnover."

Vilson cited New York City as a school district that has seen an improvement in test scores due to improvements in teachers’ professional development, rather than restriction of their rights. “Unfortunately,” he says, “that doesn’t get a lot of attention.”

But Vilson says he expects the fundraiser and the film to be a boon for parent trigger supporters: “A lot of people are going to take it as fact.”