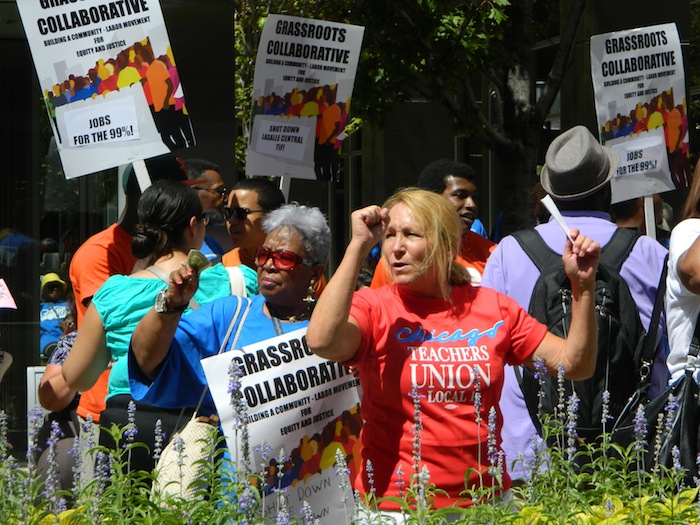 Some unusual offerings were on the menu Tuesday at the Chicago restaurant Fulton’s on the River:

“River Point Plaza: A generous portion of useless private space, drizzled with the sweat of working families. Served with a side of your tax dollars.” Price: $29.5 million.

“United Airlines: A flight of public money reserved to shift 350 jobs from the suburbs to downtown." Despite the $30 million price tag, "peanuts and beverages are not included with this flight."

The mock menu was handed out by members of the Grassroots Collaborative in protest of public TIF (tax increment financing) money being used to finance private developments. Among those private projects is the new River Point Plaza, to be built on land owned by real estate developer Larry Levy and his family, who preside over a “vast restaurant kingdom” that includes Fulton's.

TIFs are meant to revitalize “blighted” areas and create jobs by allowing a portion of property tax funds to subsidize development. But in Chicago, the program has long been surrounded by scandal. Wealthy areas like the downtown riverfront are designated TIFs, allowing taxpayer funds that otherwise would have gone to parks and schools to be turned over to private developers.

For years, former Mayor Richard M. Daley was accused by tenacious Chicago Reader reporter Ben Joravsky and others of using TIF money as a private piggy bank to reward politically connected developers. Now, in his first year in office, Mayor Rahm Emanuel has continued to leverage TIFs in ways grassroots groups say are unethical and unjust.

Emanuel's "River Point Plaza" will be a $60 million park and tunnel to nearby Union Station, connected to a new “sculptural office tower” developed by real-estate giant Ivanhoe Cambridge. With $29.5 million in TIF money, the city is shouldering half the cost.

Outside Levy’s restaurant, protestors from labor unions and community groups chanted, “Whose money? Our money!” and “Shut down the LaSalle Central TIF,” which covers the area. LaSalle Central TIF money has also been used as an incentive for corporations to move their headquarters there. United Airlines, Willis Holdings–which owns the famous tower formerly known as Sears–and Coors/ Miller Lite received millions in taxpayer funds for this purpose, to the tune of $30 million, $3.8 million and $6 million, respectively.

City officials have argued that developments like River Point Plaza create jobs and improve the economy for people across the socioeconomic spectrum. There are measures in the TIF agreements meant to guarantee jobs and contracts go to a diverse group of Chicago residents. For example, the United Airlines agreement mandates that 50 percent of construction workers be city residents and that a quarter of contractors be minority-owned businesses and 4 percent be women-owned. It stipulates that by phase two of the project, the headquarters must relocate at least 2,500 employees to the city and bring in another 2,500 external employees.

But critics aren’t buying it.

“There’s all this focus on downtown with the idea that it will trickle down to the neighborhoods--but in fact it’s mostly making it harder for the neighborhoods,” Grassroots Collaborative executive director Amisha Patel told In These Times. The Collaborative’s members include the Chicago Teachers Union, SEIU Local 73, Action Now and the Organization of the Northeast (ONE). “The mayor talks about bringing all these jobs downtown, but often they are jobs that already had workers, just moving downtown from the suburbs."

She adds: "One of the biggest sources of quality jobs [for lower-income and minority residents] is the public sector, but we’re closing mental health clinics [and] schools."

Many Teachers Union members take the diversion of property tax dollars especially personally since the city’s schools are desperately underfunded. The teachers have spent the past year in bitter public battles and highly polarized contract negotiations with Mayor Emanuel and the school board. They say it is ironic that the city can funnel to private developers many millions of dollars that otherwise could have gone to schools; yet money cannot be found to revamp struggling schools slated for closing, or to pay teachers what an independent arbiter said they deserve for a longer school day mandated by Emanuel.

“They’re destabilizing our schools and using our black and brown children as pawns,” said CTU member Sherrie Parker, who had taught at Guggenheim Elementary, one of the schools that was controversially closed. “TIF money is our money. It should go to education, not to (owners of) fancy restaurants.”

The protestors handed out the satirical menus and waved signs at diners and at the Chicago water taxis that pulled up along the dock for a closer look (before being told to leave by the restaurant). They chanted: “We’re hungry, we’re broke, we can’t pay the rent. We must not be part of the 1 percent!”

Protest participant Sijisfredo Aviles said he’s seen TIF money used appropriately in his neighborhood of Humboldt Park, a mostly Puerto Rican area on the city’s west side. Affordable housing was created there with the help of TIF dollars, providing homes for vulnerable people and creating jobs for local residents.

“The idea with TIFs was to create jobs and stabilize communities,” said Aviles, who was laid off from his job in substance abuse counseling for youth because of state budget cuts. “We don’t need to stabilize downtown…This is an excuse to siphon off money that should have gone to park districts and give it to investors. It’s a rip-off.”

Protest participant Danielle Kenny with the group Action Now said a “gentleman” walked past her and said, “Why don’t you just find a job?”

“Well that’s exactly what I’m trying to do!” she said. “Silly man.”